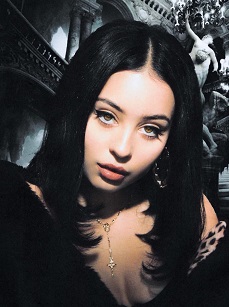 The young American actress has a promising career. She has already appeared on several projects which brought her wide popularity. Besides acting, she tries herself in business.

Since childhood, Alexa displayed interest in art, liked to write poems and songs. There is no information about the actress’ parents. As to education, the actress graduated high school and started her movie career soon. She was raised in Los Angeles, and when she was in high school, she launched her first sunglasses business. The actress said that as a girl she was a loner and often couldn’t find a common language with girls.

The actress featured in independent movies in supporting roles during several years until she finally received one of the notable characters in the uncomfortably honest TV series about teenagers. In the center of the TV series is the drug-addicted teenage girl played by Zendaya, problems of a trans girl and on-and-off going relationship between young people. The character of Alexa has a toxic romance which grows into a groundbreaking drama.

Alexa shared in the interview that it was confusing to her to get into her role. She couldn’t understand why her character stayed with her boyfriend. The real-life Alexa is a real fighter who doesn’t let any men say something negative about her. Since childhood, she saw the example of destroying relationships and saw not the best male figures.

Besides movies, she tries herself in singing. Her first single was released in 2017. The actress seeks to develop her entrepreneurial skills. She has got the cloth line, “Goddess.” In one interview, Alexa confessed that she always knew her future profession would have varied nature. In 2013 she starred in the music video “ATM Jam.”

In 2019 she appeared in the glamorous photoshoot and was called Beyonce’s diva by media.

On the top of her upcoming projects is the drama film Mainstream where the actress will stare alongside Andrew Garfield, Jason Schwartzman, and Johnny Knoxville.

Her orientation is straight. The actress is not married. She dates with American singer and musician known as JMSN. She is active on social networks, Tweeter, and Instagram. Her mother is a professional make-up artist who helps Alexa to create her style and look brilliant. In 2019 Alexa shared her make-up routine to Vogue.