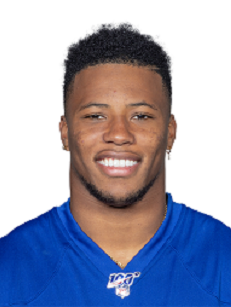 The Bronx native, Saquon Barkley started a football career in NFL in 2018, as a rookie of New York Giants, which drafted him by the second number. He loudly announced himself in the first season, breaking down a lot of records and hitting the Pro Bowl team. Saquon plays at a running back position. Saquon is not married but has a girlfriend and a daughter from her. Despite his youth, the rising star has a net worth of $25 million, including all of his properties and earnings.

The birthplace of Saquon was a borough of New York City. He appeared on February 9, 1997. His father, Alibay Barkley, grew up fighting, wearing boxing gloves and had a fierce left jab. Alibay was an amateur boxer after he was released from prison. Alibay’s uncle, Iran Barkley, was a three-time world champion. Saquon’s mother, Tonya Johnson, was from Bronx, but had relatives in Bethlehem and brought her kids, including Saquon, to visit her family there on occasion.

Although the borough was boring, the kids liked to spend time on the fields and grass. In his childhood, Saquon suffered from asthma, and its symptoms relented on the visits to Bethlehem, where he breathed better. In June 2001, Saquon’s family moved to Bethlehem. Tonya worked in retail customer service and held a second job in a tax office during returns season. Alibay changed the job regularly: he started as a restaurant dishwasher, was a baker, and then a cook.

Saquon began interested in football when he was only three years old. He and his father watched New York Jets games. Saquon carefully watched the Giants’ running back, Curtis Martin, and dreamed of being like Curtis. At the age of eight, Barkley was the headliner of Hokendauqua's youth football team, and already had a flair for scoring touchdowns.

That year, he argued with his father for $100 that he would gain 15 touchdowns in a season. And at the end of it, Saquon made his best touchdown: 99 yards, with notes of the cuts and burst and speed Barkley later showcased. Watching from the sideline, Alibay caught his son's smile. He smiled back and then shook his head.

"Not today," Alibay Barkley said, pointing to the penalty flag that dissolved the play. Saquon put his head down as the ball was spotted at the 20-yard line. His disappointment didn't last long. The next game Saquon shot right back up and ran for an 80-yard touchdown. He made it right at that time, and Alibay had to give his son the money.

After moving to Whitehall Township, Saquon entered its local high school. Apart from playing football, he was a good basketball player and a good athlete. He even won several prizes, competing for his school team. In 2013, Barkley attended a football camp at Rutgers and received a scholarship offer from then-coach Kyle Flood. Saquon committed to them.

In 2014 James Franklin became the head coach of Pennsylvania State University and quickly began recruiting Whitehall star. Franklin called on Signing Day in 2014, saying the top running back in Pennsylvania couldn't leave the state to play college football. The parents urged Saquon to go to Rutgers but left the decision to him. Saquon switched to Penn State in February 2014, but not without some guilt.

The Whitehall graduate was among the most talked-about freshmen during Penn State's training camp. Receiver DaeSean Hamilton called him "electric." Franklin ranked first-year students on a green/yellow/red redshirt scale: Green-lit players would play, those in yellow could play depending on need, and those in red most likely would redshirt. Barkley was included in the “green-light” list.

In his freshman year, the running back appeared in 11 games, rushed for 1076 yards and seven touchdowns. Saquon showed the most outstanding game among other college rookies and received a lot of various awards. Next season, Barkley became the Big Ten's offensive player of the year and proved himself as one of the nation's most complete college running backs. The sophomore led the Big Ten in touchdowns (19) and all-purpose yards (1,666) and was second in rushing yards (1,302) heading into Penn State's appearance in the Rose Bowl.

In December 2017, Barkley announced he would forgo his senior year with the Nittany Lions and applied for early eligibility to enter the 2018 NFL Draft, adding one of the elite rushers in college football to the draft pool. He revealed his intentions via Instagram. Saquon came to the end of his college career as the most promising player.

During NFL Combine, Barkley was compared to LaDainian Tomlinson. The sports columnists prophesied a 2nd draft pick for him and said Barkley would make the Giants a playoff team. Also, some believed he would be chosen by Browns as the 1st pick. Saquon left no doubt about his size when he weighed in at 233 pounds, and he left no doubt about his strength. The 2018 NFL Draft's top-rated rusher bench pressed 225 pounds for 29 reps, tied for the most at the position.

As expected, in April 2018, Barkley became the rookie of New York Giants, drafted by 2nd number. It wasn't just a big moment for the Penn State running back. The pick made Barkley's agent, Kim Miale, the first female agent to represent a player drafted that high. On July 22 Barkley signed a four-year $31.19 million contract.

The Giants rookie debuted in Week 1. Barkley finally broke free for the Giants on a long touchdown run in the fourth quarter when his team needed it the most. That game he rushed for 106 yards, but the team lost. In Week 2, the rookie started breaking NFL and franchisees’ records. He made 14 catches. It was just the beginning of outstanding rookie season.

In 2018 Saquon appeared in 16 games, started all of them. Barkley showed greats stats for a rookie: he rushed for 1307 yards and 11 touchdowns in 2018 season and was named to Pro Bowl, winning it. He was awarded by Pepsi, FedEx, AP NFL, PFWA and AP as the best rookie of the season. At the beginning of 2019 season, Barkley became one of the Giants’ captains. Also, he was widely considered that year’s consensus top fantasy choice.

Started 2019 season in a good way, Giants running back left Week 3 game with an apparent right ankle injury. By video, Barkley was hit on the right thigh and, as the defender slid down, the ankle was trapped, and foot turned out. NFL Network’s Ian Rapoport said Barkley would miss several weeks with a high ankle sprain. That was a chance for Giants rookie quarterback Daniel Jones to demonstrate his strength by replacing an injured Barkley.

Saquon was featured in ESPN’s new “This is SportsCenter” commercial that was released on September 6, 2019. In the ad, Barkley was at a presentation led by anchor Stan Verrett that kept getting interrupted with messages from co-anchor Neil Everett about Barkley. It was one of 12 episodes that came out that date that featured the likes of Brooks Koepka, Jared Goff and Manny Machado.

Saquon started dating his girlfriend, Anna Congdon, in 2017. She was a basketball player while studying at Forest City High School. Then, she enrolled in Penn State University where Barkley majored in journalism. The couple doesn’t speak about their relationships publically. In April 2018, Anna and Saquon became parents. They welcomed a daughter, Jada Clare Barkley. Even though Anna gave birth, she has not yet become Barkley’s wife.