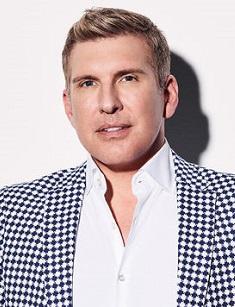 The reality star is best known for his bright behavior, materialistic lifestyle then acting skills. Besides his career on the screen, he is a businessman, a real estate agent, and a loyal family man.

He was born in Georgia; his ethnic background is American. He has got two siblings; the children grew up in a full family. There is no information about his education.

The businessman appeared on various TV series and shows, but he couldn’t get recognition. But his TV popularity began growing from the popular TV show, where Todd participates with all his family, a wife, and five kids. He has a unique charm and attracts attention by his luxurious style of life and reckless spending money.

On the show, he and his family wear designer clothes, have a luxurious house and fancy cars. The reality show displayed the life of millionaire on the screen and got wide popularity. The show has received controversial reviews from critics, but ordinary people highly demand it.

A lot of celebrities became guests of the show. One of the brightest guests was the American country singer Sara Evans. The singer mentions the TV superstar in the interview, saying that he is different person in his real life. She stated that in real life, Todd makes a lot of efforts to support his family, the reality star also is more serious than on the screen.

The first son of Todd and the father of Chloe appeared in the first season of the show. The older daughter Lindsie appeared on the show for five years and left it in the result of falling out with the father. The other Todd’s son, Chase is a constant star of the reality show, where he is depicted as a young man engaged in get-rich-quick schemes.

In one episode Todd threw the laptop of his son into the swimming pool to give him a lesson. Todd underlines that member of his family and he don’t pretend to be more decent. They portray family life; that’s why millions of people watch it. The show gained international recognition and was sold to Canada, Australia, the UK, and Asia.

His main job is connected to real estate, his firm purchased foreclosed homes and then turned them around for profit. There are a lot of gossips about his personal life. Rumors have it that Todd is genuinely in debts. As it reports, he became bankrupt twice but still stays a millionaire. His career of the estate agent helped him to earn 95% of his fortune, besides he makes investments and has a regular income from the TV show.

His wife claimed him in domestic violence against her. His net worth is about $46 million. Todd is active in social networks and has more 300K on Instagram. In 2019 the other daughter of Todd was engaged, Savannah. Todd took the wedding preparation under control.