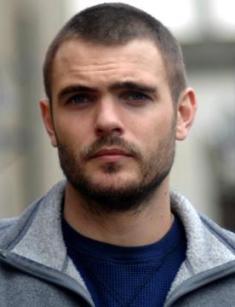 English actor Alex Roe became famous for his talented performance in the TV series The Fugitives and The Cut, the movies The 5th Wave, Hot Summer Nights, Rings and other exciting motion pictures. This tall blond with magical charm continues to win the hearts of fans and admirers to this day, develops acting skills, day by day improving his talent.

Alex was born in London in 1990. He probably inherited the craving for creative work from his mother, who was a ballerina. Roe's grandfather grew up in Ladbroke-Grove and devoted most of his life to sporting events at fairs. He performed and boxed for the amusement of the public. This is probably why Alex's father did not like creative professions and believed that his son should be trained for a "man's" job.

By the age of ten, the boy was on a semi-professional football team. As Roe himself later admitted in an interview, he did not dream of becoming a professional football player, because there was a lot of competition in this sport. However, he did not concentrate only on games. When he was in school, Alex participated in school productions, and on one of them, he was noticed by Jennifer Saunders, known as an actress, screenwriter, comedian, and singer.

The woman attended the play as a spectator, because then on the same stage with Alex was her daughter Freya. She admired Roe's acting and invited him to an audition for Jam and Jerusalem. As the actor admits, it was with this comedy that his real acting career began.

At the age of ten, Alex Roe attended open auditions for a role in the movie The Calling. The boy's acting was appreciated, the role of the Antichrist in the horror film went to him. Despite being busy filming, even in his youth and growing up, the young man always tried to help his parents. He worked part-time in the fruit trade, tried himself as a decorator, painter and tried to help his father in other ways, but the filmography of the actor was continually expanding and replenished with new motion pictures.

The debut of the young actor took place in 2000. In the summer, on the big screens, movie fans watched the incredible acting of Alex Roe in the horror movie The Calling. The boy starred in the same film with Richard Lintern, Laura Harris, Alice Krige, Francis Magee and other actors. Alex plays the role of Laura's son (in the movie, her name is Christie), who gets supernatural abilities, and at the same time becomes excessively violent. The boy coped with the task set before him without complaints, which opened the way for further development.

In 2005, the young man got a new role in the children's television series The Fugitives, which at that time was very popular among young people. In this motion picture, he appeared in the image of a teenager who has a talent in mathematics and a high IQ.

In five years, the young man appears before the audience in one more teenage drama in which his character chooses between the girl expecting a child from him, and a career in swimming. A handsome, athletic and popular young man faces a difficult choice. Another screen time for the actor became the medical television series Holby City which started in 2011. The young man was cast as Connor Lane and appeared in the episode Damage Control.

In the movie, The 5th Wave, directed by J Blakeson, the actor got to play the leading role. In the sci-fi thriller, Roe played the part of Evan Walker. The motion picture was launched on big screens in early 2016. Besides Alex Roe, the famous movie starred such celebrities as Chloë Grace Moretz, Maika Monroe, and Nick Robinson. And in early 2017, the film Rings was released. The young man worked with Matilda Lutz on this motion picture. F. Javier Gutiérrez directed the horror film.

Alex Roe tries to hide from the press the facts about his personal life. Fans of the young man do not know much about his relationship with the opposite sex. His Instagram account doesn't have a lot of photos, and that does not allow the fans to conclude his love life.

However, some information about the actor's personal life is known to his fans. The first relationship that he did not try to hide was with Olivia Cooke. The actress became famous due to the leading role in the movie directed by John Pogue The Quiet Ones. She also participated in the filming of two seasons of Bates Motel, a short film Ruby's Skin, and the fantastic sci-fi thriller The Signal. The relationship between the two actors did not last long, and soon the fans of the couple learned about their breakup.

After finishing the shooting of The 5th Wave in 2016, people started talking about the relationship of the star with the charming beauty Chloë Grace Moretz, whose biography and history of becoming an actress is no less impressive.

Pictures of the couple walking together in the park and on a date on a football game regularly appeared online, but the actor insists that they are just friends. However, he does not deny that during the filming of the movie, he got along well with Moretz.

In an interview, Alex Roe says that he is now focused on his career and its development and is in no hurry to start a family. The wife and children might come later when the young man realizes that he has met the right one.

Alex Roe has a net worth of $5 million. In 2015, the young actor moved to Los Angeles and now lives in a comfortable apartment in Venice Beach. This is a famous district, which is never quiet; its long beach with white sand and clear water attracts many tourists. According to celebrity, he does not visit expensive private clubs and prefers simple bars. And instead of the premiere of a movie, he chooses to attend a football match.

As before, little is known about Alex's personal life and relationships with women. In between the primary profession, Roe manages to shoot for fashion magazines. And as for his acting profession, the man actively worked on the set of the second season of the television series Siren. Fans were looking forward to the moment when the television series will be released on the screens; the premiere took place in January 2019.