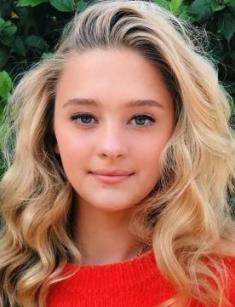 Lizzy Greene is an American actress who earned her popularity thanks to the role of Dawn Harper in the youth series Nicky, Ricky, Dicky & Dawn produced by the Nickelodeon channel. This project brought the young star the Kid’s Choice Awards.

The would-be actress was born in Dallas, Texas, on May 1, 2003. The girl’s childhood was just like that of other kids; the parents had nothing to do with arts. However, little Lizzy showed her talent early.

By 15, Greene was pretty popular in her home region: she participated in many local events. Further on, the young woman entered the Fun House Theatre and Film School in Plano. Fame was not what Lizzy desired – she just wanted to find self-fulfillment in this sphere and tried to attend as many auditions as she could.

The actress debuted in several TV shows and full-length movies at once. In winter 2013, she appeared in the pilot of the series Nicky, Ricky, Dicky & Dawn by Matt Fleckenstein and Michael Feldman. The premiere took place in fall 2014; teenagers liked the show immediately. Lizzy collaborated with Allison Munn, Brian Stepanek, and Casey Simpson.

Following the success, Nickelodeon producers invited the girl to the series The Thundermans, Damaged Goods, Paradise Run, and so on. Besides, the ABC channel involved the artist in several works.

In 2018, the series A Million Little Things was premiered; Elizabeth received the lead role of Sophie Dixon. The actor Aidan Gallagher is the actress’s frequent stage partner: by 2019, the young people have collaborated in four projects.

All in all, Lizzy Greene has proved to be a person of a splendid talent, and creators of youth shows gladly invite her today.

Lizzy Green is pretty and charming; her height is 5.38 feet (164 cm.), and her weight is 112.44 lbs. (51 kg.). Many young men like her, but the details of the artist’s personal life remain unknown; millions of fans discuss on Twitter and Reddit who Lizzy Greene’s crush is.

One can see photos from a movie set, moments from events, and pictures in a swimsuit on Lizzy’s Instagram; the young star does not forget to address her fans.

The actress’s schedule is busy today; however, her time-management skills are excellent. Greene finds time to study drama and enjoy hobbies: painting and music. The celebrity leads a healthy lifestyle, swims, and plays soccer sometimes. She has a German shepherd Jett and a cat Coco Chanel.

Despite her young age, the artist’s earnings are considerable thanks to the collaboration with Nickelodeon. The media believe that Lizzy Greene’s net worth is about $500 000-$1 million.

In 2019, the actress had an episodic role in the series Cousins for Life; fans are looking forward to new projects starring their favorite.