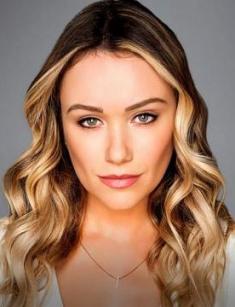 Katrina Bowden is famous for her roles in comedy detectives and popular TV shows. The girl's career proves that it is possible to build an acting career and become famous, even if a person was born in a small town.

Katrina Bowden was born on September 19, 1988, in Wyckoff, a township in New Jersey, USA. The girl was good at studying; she graduated from Saint Thomas More School in Midland Park and Immaculate Heart Academy in her native state of New Jersey. At the age of 14, Katrina began a career in the modeling business, but it did not interfere with her studies.

The girl made an acting debut in 2005 when she played in the music video of the American rock band Fall Out Boy for the song “Dance Dance.” At the same time, Katrina received offers to appear in commercials. After that, the producers noticed her and offered the first role in a movie.

The turning point in the biography of Katrina was the role in the series 30 Rock, which premiered in the autumn of 2006. The girl played a charming but incompetent assistant to Cerie. The comedy aired on NBC and had high ratings. It won the prestigious Emmy Award. A total of 7 seasons were released, and the shooting lasted until 2013.

In 2008, the filmography of the actress included the movie Sex Drive, which premiered in October. For the next two years, the actress starred in the low-budget comedy films The Shortcut and Ratko: The Dictator's Son, which were released only on DVD. The young woman won the prestigious Screen Actors Guild Award. From 2010 to 2014, she was nominated for it but did not receive the prize.

In 2010, the comedy film Tucker & Dale vs. Evil was released, in which Bowden played Allison. The project was successful and grossed $5 million at the box office. Moreover, it premiered at the prestigious Sundance Film Festival.

She also played the role of Mia in one of the installments of the American Pie film series. The movie was released in 2012, received mixed reviews from viewers and film critics, but paid off and brought Katrina an impressive income.

In 2012, the girl was voted as Esquire Magazine's Sexiest Woman Alive. A year later, fans saw the actress in the video for the American band Panic! at the Disco’s song “Miss Jackson.” Then, the woman appeared in the movies Public Morals, Love on the Slopes, and received an offer to play a role in the soap opera The Bold and the Beautiful, which has been broadcast on CBS for many years.

The actress does not hide her personal life. On May 19, 2013, she married Ben Jorgensen, a singer, composer, and guitarist of the rock band Armor for Sleep. So, they now live together happily.

Before the wedding, Katrina had dated her future husband for about three years. The couple has no children yet.

In 2019, Katrina Bowden has a page on Instagram, where she posts photos in bikini and evening dresses, pictures with her husband, friends, and pets.

Katrina Bowden has an estimated net worth of $1.1 million.