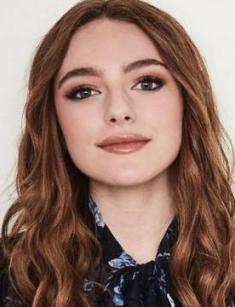 Famous American actress Danielle Rose Russell began to conquer modern cinema and in a short time, managed to attract the attention of directors. The talented acting of the girl allowed her to star in several movies and TV series, even minor roles set her apart from the rest of the cast. That's why it is evident that in the future, the actress is going to play many central characters.

Danielle was born in the fall of 1999 in Pequannock Township, New Jersey, U.S. Russell’s birthday is on October 31. She later moved with her parents to West Milford, where she spent her childhood. Her mother, Rosemary Rado, used to dance for a living. Her father's name is Walter Russell, and he's a singer. Perhaps, Russell got her creative skills from her parents. Russell’s family helped her in all her creative activities. Besides, the girl's appearance helped her in getting her first projects in advertisement campaigns.

Russell realized that she wanted to have a creative career at the age of ten. Danielle's first job was shooting for magazines and promotional videos. During her school years, Russell already started trying herself as an actress. Even though these were only performances in the school theater, she was entrusted with the leading roles in several productions.

Russell made her debut in 2014 when her first movie titled A Walk Among the Tombstones appeared in her career. It is a crime drama directed by Scott Frank, based on Lawrence Block's novel. The actress got the role of the daughter of a Russian drug dealer.

Danielle got her next role only in a year. In the motion picture by Cameron Crowe Aloha, Russell played the daughter of Tracey Woodside ( Rachel McAdams). And a year later the girl appeared in two movies: the science fiction thriller Pandemic and the television series The Last Tycoon.

In 2017, Russell's filmography was replenished with only one movie. It was a family drama directed by Stephen Chbosky, Wonder, based on the novel by Raquel Palacio. Danielle got into the character of Miranda, the best friend of the main character, Via. This movie was nominated for 19 awards and won two -as Best Independent Film and Most Touching Film.

In 2018, new American television series The Originals came out with Russell's participation. Julie Plec created it as a spin-off of The Vampire Diaries. The plot revolves around some of the main characters taken from the series, including actor Joseph Morgan. Danielle appeared in season five; she was invited to play Hope Mikaelson. Her next role in Jim Loach's drama was minor, but she worked on the same set with Judy Greer, Donald Sutherland, Luke Wilson, and Liana Liberato.

The young actress prefers not to speak about her personal life. On Russell's Instagram account, there are photos of her alone or with friends and colleagues on the set. Russell's boyfriend, even if she has one, is out of the eye of the paparazzi. What is known for sure, is that Russell does not have a husband yet. Fans want to find out such information as Russell’s hair and eye color, figure size and face shape. They are mostly interested in her appearance, although there are those who admire her purely as a great actress. Some people say that Danielle Rose Russell looks like Phoebe Tonkin and wonder if they are related, but the girls met only on the set of the Originals and quickly became friends.

On her social accounts, Danielle prefers to post professional pictures, and there are quite a lot of them online. Russell doesn't post pictures in a bikini or underwear. The reason behind such a decision remains a mystery, as the fans of the actress have noted Russell's fitness. The girl keeps a healthy diet and sometimes does sports. Russell weighs 116 pounds with a height of 5 feet 24 inches.

Danielle Rose Russell has a net worth of $650,000. Russell continues to make movies; the girl regularly gets invited to play the leading characters, to which she, without hesitation, agrees. In 2018, the actress appeared in the television series Legacies (LG), which became a spin-off of the Originals. The television show tells the story of the graduates of the Salvatore high school, which is designed for children with supernatural powers.

Season 2 of Legacies is due to start in October 2019; the cast remained the same and included Danielle Rose Russell. In the new series, according to the director's idea, viewers will see the continuation of the already shown story, after which a couple of years have passed.