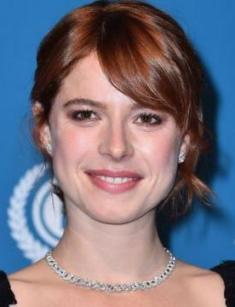 The Irish actress and singer Jessie Buckley has begun her career recently: she participated in a British talent show in 2008 and then started working on movies and series, most of them are popular on IMDb. The audience knows the artist for War & Peace, The Woman in White, and Taboo. Many movie makers give Buckley lead parts; her schedule is planned for two years ahead. In 2019, Forbes included the woman to the Thirty Under 30 list, marking her achievements.

The would-be star was born in Killarney in 1989. The Irish roots gave the girl red hair and a stubborn, energetic character; she liked to sing and perform. Jessie’s mother was a vocal teacher and helped her daughter develop her talent. The family became Buckley’s first audience; she had a brother and three sisters. The father worked as a bartender and wrote poetry; Jessie says he is the most charismatic person she has ever met.

When the girl was a middle-school student, she frequently participated in theater performances and sometimes personified male characters. At the same time, she was fond of music and played the piano, clarinet, and harp in the Royal Irish Academy of Music. Buckley was famous in her town and won several artistic competitions; everybody expected her to fly right and recommended to enroll at Drama School in London.

The attempts to enter a capital university failed, but the young woman did not feel discouraged; she applied for the talent show I’d Do Anything and successfully passed the auditions in 2008.

The project was aimed at finding an actress for the role of Nancy in Lionel Bart’s musical Oliver! Artistic and singing, Jessie was perfect for musicals, and her talent was appreciated; the contestant reached the final, and only Jodie Prenger managed to surpass her.

When the show finished, the young singer was offered to be a stand-in for Oliver! However, Jessie preferred to be a leader and refused. Following her recent popularity, the young woman gained many invitations to ensemble concerts and events; the lead part in the musical A Little Night Music gave her the chance to appear in the major grounds of the country. Further on, Buckley worked on a series of other musicals and classical plays.

The cinematographic career started in 2010; it was a small episode in the series This September. Maria Bolkonskaya in a screen adaptation of Leo Tolstoy’s novel War & Peace became the first significant role; the series was aired on the BBC in 2016. This character was notable for her external unattractiveness and sensitive, tender heart; such types are the most exciting for the actresses.

Since that time, Jessie has been an in-demand actress. In 2017, she collaborated with Tom Hardy in the gloomy, dramatic series Taboo set in the 19th century. Jessie personified Lorna Bow, an adventuress who brings some light to the overall gothic atmosphere of the story.

Critics highly appreciated the actress’s work in Michael Pearce’s drama Beast. Red-haired Moll falls in love with a weird guy and rebels against her parents’ despotism. Buckley skillfully portraited the slightest changes in the character’s nature: shy and timid, she goes off the handle at some point. Johnny Flynn became the actress’s stage partner.

The series The Last Post and The Woman in White also gave the lead parts. In 2018, Jessie expanded her filmography with the musical Wild Rose and played a woman who wanted to become a country singer. Rose-Lynn Harlan used to have legal issues and faces a conflict with her mother; she also needs to take care of her children. The young talent goes to the capital of the country genre, Nashville, to become a star. This is where Buckley had the chance to show her vocal abilities, finally.

In 2016, Jessie had a romance with James Norton at the movie set of War & Peace. Interestingly, the actors played the Bolkonsky siblings, but their real relationship was nothing like that. The lovers were inseparable: one could see them in a park, on a red carpet, and at parties for two years. They broke up eventually; James started dating his colleague Imogen Poots.

After the split-up, the actress has kept her personal life secret; she has no boyfriend or children in 2019 and focuses on work. Jessie is not registered on Instagram or Twitter and tries to avoid publicity; she confesses in interviews she feels uncomfortable at social events and big parties. Buckley never posts images in a swimsuit and tries to set a good example for her sisters, showing them how important it is to be yourself and do what you really want.

In 2017, the psychological thriller Beast brought the artist the BAFTA Rising Star Award. Today, top directors would like to collaborate with Buckley, and she can choose any project to her taste.

In 2019, Jessie participates in the British-American series Chernobyl. 2020 will bring The Voyage of Doctor Dolittle with many international celebrities: Robert Downey Jr., Ralph Fiennes, Emma Thompson, Michael Sheen, Rami Malek, and others.