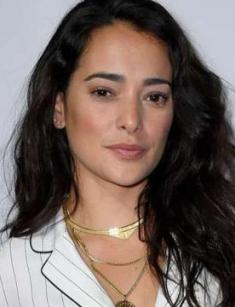 Natalie Martinez is an American film and television actress. She began her career as a model and achieved success, participating in beauty contests. The girl rose to fame, shooting in the TV series.

Natalie Martinez was born in Miami on July 12, 1984. The mother of the actress is of Cuban ancestry, so the child inherited such an exotic appearance from her. The girl studied at St. Brendan High School and was also a student at Catholic High School in Westchester.

The attractive appearance made Natalie think over a career in the beauty industry, and in 2002 the girl took part in the first competition. Its organizer was singer Jennifer Lopez. The main prize was the opportunity to present a new clothing line for the artist. Natalie was the winner.

In 2008, the model participated in the Miss Florida contest. Martinez failed to win it, but she was awarded the title "Miss Friendliness."

Natalie Martinez made her movie debut in 2006. The producers of the series Fashion House paid attention to the charisma and artistic abilities of the model. She was offered the role of Michelle Miller. Natalie played in 55 episodes of the project.

After two years, Martinez received an invitation to play in the movie Death Race. The fantasy action movie caught the fancy of viewers and helped the novice actress to consolidate the success. The filmography of the actress soon included the series Detroit 1-8-7 and the movie End of Watch.

Experts consider Jamie Lovato to be the most memorable character in Martinez's credentials. Viewers also liked the detective from the series CSI: NY. They watched the work of Natalie in the TV show for 12 episodes.

From 2013 to 2015, the actress managed to star in several projects, including the film Broken City, the TV series Secrets and Lies, and Kingdom. Natalie's acting career turned out to be productive. She gained experience in the field of acting and became an in-demand actress. Experts called her a promising artist, and directors invited her to their projects. Critics highly appreciated the TV series Under the Dome, based on a book by Stephen King, featuring Natalie Martinez.

Natalie has an attractive figure. She does not hide the fact that she loves to eat, but she does not break the rules of a healthy diet.

The actress describes herself as an easygoing and open person. She admits in an interview that although she often puts on expensive clothes and jewelry, she always sees herself as a real and simple woman. Martinez loves children, and in her youth, she even worked as a volunteer in a maternity ward.

There is little information about the actress's personal life. She does not share stories about a romantic relationship, but her photos on Instagram often show a representative of American show business, Dallas Austin. The actress wears a bikini and poses with the man; she usually posts pictures depicting them together walking in the city.

Natalie continues to build her acting career. In 2018, the series The Crossing was released on television. In 2019, Martinez appears as a model in fashion magazines.

The actress also receives invitations to play in multi-part and full-length movies. Paparazzi often notice her among other celebrities at public events. Natalie Martinez attends fashion shows and parties.

Natalie Martinez has a net worth of $4 million.