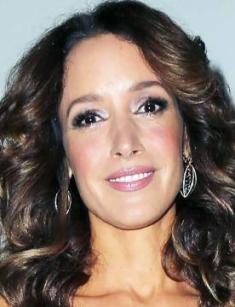 Jennifer Beals became a star in the early 1980s, when the iconic movie Flashdance was premiered. For many years, the audience associated the actress’s name with the striptease dancer who wanted to be a ballerina; Jennifer’s other roles were not as bright as this one. However, in the mid-2000s, the artist had another notable character in her filmography: Bette Porter in The L Word about lesbian women.

The would-be celebrity was born on December 19, 1963, in Chicago. The girl’s parents had nothing to do with cinematography: the father owned a small grocery store, and the mother worked as an elementary school teacher.

Jennifer inherited her almond-shaped anthracitic eyes from an African-American father, who died in 1973. The Irish mother gave her daughter plasticity and grace.

Beals earned her first money when she was 13: she looked older than her peers and persuaded her employer she was 16. Still, the would-be star did not feel inspired by selling ice-cream: she dreamed of an acting career. One day, Jennifer participated in a school performance and made sure this was what she wanted. The popular play Balm of Gilead by William Lendford impressed her greatly.

As soon as the young woman graduated from school, she started studying Literature at Yale University; another Hollywood star, Jodie Foster, attended the same university at that period.

The student wanted to develop her career and frequently attended auditions. The director Tony Bill noticed the beauty and gave her a secondary part in My Bodyguard (1980). Soon, Jennifer turned into a well-known sex-symbol.

Jennifer Beals is called an actress of a single role sometimes: many people still remember her as Alex Owens in Adrian Lyne’s melodrama Flashdance. The artist’s character is a goal-oriented young woman who dreams of a big stage; she works as a factory welder in the daytime and performs striptease dances in a bar at night.

One day, the Chicago Cinderella meets the prince, the director of the factory (Michael Nouri), and things change.

Movie experts appreciated the beginning actress’s work but criticized the primitive plot. Nevertheless, ordinary viewers liked the story, and the project was top-grossing. The soundtrack to the movie was also popular. A stunt stepped in for Jennifer at some episodes, when it was necessary to show sophisticated movements. The role of the dancing welder brought the actress a nomination for the Golden Globe.

Fame and fans did not make the newborn star obnoxious and proud. After the premiere of Flashdance, she continued to master her skills and appeared on the screen in the 1985 movie The Bride starring Sting. However, the audience did not pay much attention to it; critics’ reception left much to be desired.

1994 brought the sports drama Blue Chips; Jennifer had a secondary part in the story about a basketball team. Overall, the actress was getting many invitations at that period; several movies with her were presented every year. None of them surpassed the striptease welder’s popularity, though.

In 2004, the series The L World with Laurel Holloman and Erin Daniels was launched. The role of Bette Porter opened a new page in the actress’s career. She was personifying a lesbian woman for six years and changed her social opinions: Beals became a proponent of same-sex relationships. She confessed in one of her interviews: “I think after playing Bette Porter on The L Word for six years, I felt like an honorary member of the community”.

One can see how passionate about equality the artist is on her Instagram page. There are no light-minded, glamorous photos there; many of them portray women with feminist posters.

Jennifer mentioned she had been flirting with women on the screen so much that it was difficult for her to show feelings for a man. Of course, it was a piece of irony: the project did not have any influence on Beals’s family life.

In 1986, the black-eyed beauty married her first husband, Alexandre Rockwell; he starred his wife in the movies In the Soup and Four Rooms. The spouses had no children together and divorced in 1998. The same year, the woman married the Canadian entrepreneur Ken Dixon; their daughter was born in 2005.

The actress’s life is full of adventures today; she is a curious and energetic person who regularly participates in events pertaining to the protection of women’s rights. The actress is also fond of photography. She did not want to mix her acting career with this hobby and presented her works under the name of Jennifer Dixon. Apart from that, the celebrity likes triathlon and keeps fit; her height is 5.68 feet (173 cm.), and her weight is 119 lbs. (54 kg.).

Jennifer Beals’s net worth is estimated at $8 million in 2019.