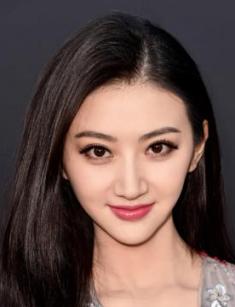 China's golden age of cinema began in the middle of the 20th century, and at the turn of the 20th and 21st centuries, the release of such masterpieces as Crouching Tiger, Hidden Dragon and Red Cliff became a triumph. Modern Chinese movies can compete with Hollywood projects, and the actors are no less famous than their overseas colleagues.

So, the premiere of the Chinese drama-comedy My Belle Beauty made the young actress, Jing Tian, popular in 2010. In 2016, Jing already wore a Dior dress in Hollywood at the premiere of The Great Wall, co-produced by the United States, China, Hong Kong, Australia, and Canada.

Jing Tian (the name means "sweet queen" in Chinese) was born on July 21, 1988, in the large city of Xi'an, Shaanxi. The slim girl (her weight now is only 97 lbs. (44 kg) with a height of 5.51 ft. (168 cm)) showed the parents her acting skills, and they enrolled the child in the local classes to study dancing and singing. Jing was a member of the Little Swan Art Troupe, which was considered the best in Shaanxi province.

In 2000, the girl entered the Beijing Dance Academy and began to study Chinese folk dance. Four years later, Jing Tian graduated from high school and signed a contract with the Starlight Pictures and Television Company. So the girl officially started a career in the world of Chinese show business.

Jing did not plan to connect her life with cinematography because she wanted to become a singer. After graduating from the dance academy, the girl entered the Beijing Film Academy to study music. In 2007, Jing Tian released the first solo album, entitled Who Are You. Soon, the Chinese director, Ning Hao, made a video for the title song of the same name.

After the release of the music video, Jing thought seriously about an acting career. The girl made her film debut in 2008, playing in the horror movie Anaconda Frightened, in which Jing landed the title role immediately.

After her debut, Jing auditioned for the role of sensitive sentimental girl Ouyang Xue in the family TV series The Epic of a Woman. But she gained real popularity in China after the release of the comedy-drama My Belle Beauty, directed by Hong Li, in which the actress played the title character named Emma.

At the same time, Chinese director Chen Jin decided to shoot an excellent war drama dedicated to the events of the wars of the seven rulers. Jing Tian played the role of Tian Xi, the daughter of the power general Tian Ji, who led her army into battle against the army of the neighboring kingdom of Wei. A gentle love story unfolds during incredible fighting. On April 12, 2011, the drama premiered worldwide and made the young Chinese actress world-famous.

For the next two years, Jing Tian starred in 6 movies that did not attract much attention of viewers outside of China, except for the crime action films Special ID and Police Story 2013.

In 2014, the actress’s career had a lot of significant events. The woman played a leading role in the comedy action movie From Vegas to Macau, co-produced by China and Hong Kong, and also voiced a character in the Chinese family cartoon Dragon Nest: Warriors' Dawn. The same year, Jing Tian was nominated for the prestigious Hollywood Film Awards and won a Hollywood International Award.

The award ceremony was held on November 14, 2014, in Los Angeles. The same year, the woman received another award, which was not so pleasant. It was the Golden Broom Awards (an equivalent to the more famous Golden Raspberry Awards, honoring the worst of cinematic under-achievements) for Most Disappointing Actress for her work in the film Police Story 2013.

However, the actress was not upset, and in 2016 her career already took off. The girl starred in the fantasy thriller The Great Wall with Matt Damon and personally attended the world premiere of the movie in Los Angeles on December 6, 2016.

Jing appeared in an extravagant Christian Dior dress, emphasizing all the advantages of the actress’s figure. The audience agreed that Tien looked very delicate and tender. Although critics gave mainly neutral reviews, the popularity of Jing Tian in Hollywood increased.

Some film critics insisted that the budget of the movie was unreasonably high, the choice of actors did not respect the rights of Asians, and the film resembled a computer game. Nevertheless, according to the director, the main goal of the movie was to promote the history and culture of China in the world, and it was successfully achieved.

Jing Tian is the only Chinese winner of the Hollywood International Award in the Hollywood Film Awards history. According to a press release, she won the inaugural award because her "performances have ignited the box office in her native land," and the award "was established to recognize cinematic talent from around the world and will be given every year," but it was discontinued the next year. In total, there are three international awards in the actress's credentials, but two of them were given for disappointing roles.

The actress prefers to hide the details of her personal life. Even the photos on her Instagram and Facebook pages cannot help answer the question of whether Jing's heart is free or not.

The woman devotes most of her time to work, fully concentrating on her career, and in her spare time, she does charity work.

Although the premiere of The Great Wall in December 2016 was successful, and it grossed more than $330 million worldwide, which made two times its production budget, in 2017, Jing Tian won the Golden Broom Awards for Most Disappointing Actress for the role of Lin Mae in The Great Wall.

In 2017, two more movies featuring Jing Tian were released. These were the fantasy thriller Kong: Skull Island and the drama Fist & Faith. Now the actress is busy filming on the set of the fantasy action movie Pacific Rim: Uprising, which will premiere in 2018.