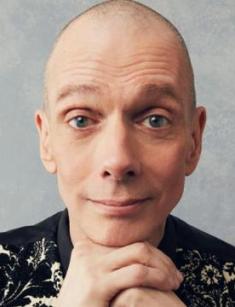 Doug Jones is an American actor famous for his “non-human” roles in sci-fi, fantasy movies, and horrors; he has appeared in more than 140 projects. Despite such an extended filmography, people rarely recognize him: the majority of his roles imply lots of latex and makeup.

Doug Jones was born on May 24, 1960, in Indianapolis, Indiana. The boy went to the Bishop Chatard High School and then entered Ball State University, receiving a Bachelor’s degree in TV communication. At that time, the student played the university’s talisman, Charlie Cardinal; he would regularly appear at sports and cultural events.

As the artist told journalists, he used to work as a mime at a Cincinnati park; his job was to scare children, and it was fun for the young man.

Three years after graduation, Jones moved to Los Angeles. He was popular in Hollywood and received many invitations to commercials and series immediately.

One day, the actor participated in a McDonald’s commercial. His character had a crescent-shaped head and a smile; he was playing the piano and sang Bobby Darin’s song to invite people to the restaurant in the evening. Although the video was pretty weird, it brought a breakthrough for Jones.

Doug debuted with an episodic role in The Newlydeads (1987). Since that time, he has always had some parts to play. The man appeared in several projects every year and gained secondary parts mostly, but they stuck in people’s memory for good.

In 1999, the artist joined the cast of the popular youth series Buffy the Vampire Slayer. He was given the role of Lead Gentleman, the mysterious monster who kidnapped citizens’ voices. This episode won two Emmy Awards.

In 2002, Doug took part in Men in Black II as an alien Joey and personified a human being after several millions of years of evolution in Time Machine; the creature bore little resemblance to the present-day man. Thus, Jones became “a person in a mask” soon.

Famous musicians started inviting the actor to their music videos; he collaborated with Madonna, Marilyn Manson, and the group Red Hot Chili Peppers.

Guillermo del Toro’s projects brought the artist much popularity. In 2004, the movie Hellboy was released; Doug played Abe Sapien, a supernatural being with superhuman powers. The movie was successful among the audience.

Jones starred in the following parts of Hellboy, as well as the animated movie and computer game. In 2009, he was named the best supporting actor and won the Fangoria Chainsaw Awards. The same year, Doug was included in the Fangoria Horror Hall of Fame.

The actor collaborated with Guillermo del Toro again in 2005, when he personified the Faun in Pan’s Labyrinth. It was a new level of popularity. The project brought its creators three Academy Awards: Best Cinematography, Best Art Direction, and Best Makeup.

By the way, Doug had another role in the same movie, The Pale Man: the terrible child-eater with eyes on its palms. The man had to wear a bulky costume, artificial limbs, and tons of makeup; besides, he had to learn long dialogs in Spanish.

Guillermo del Toro was fascinated with Jones’s talent and continued to work with him. He invited the artist to the series The Strain in 2014.

In 2007, the actor appeared as Silver Surfer in the screen adaptation of the comics Fantastic Four: Rise of the Silver Surfer. Thanks to his height (6.3 feet, or 192 cm.) and slim build, the contortion master could move gracefully even with layers of makeup. He has not had many opportunities to play without masks and face paints: Adaptation, Mystery Men, Batman Returns.

In 1984, Doug Jones married his college girlfriend, Laurie; the family lives in California.

The artist has an Instagram page and posts photos from new projects and home pictures sometimes.

The latter movie was premiered on August 31, 2017, at the Venice Film Festival. Jones played an amphibian creature and wore a fascinating makeup again. The project enjoyed many positive reviews from critics and ordinary cinema-goers.

The actor’s schedule has been planned for several years ahead. He is expected to appear in Nosferatu, The Legacy of Avril Kyte, and The Rainy Days of Timothy Grey.

In his turn, Guillermo del Toro has revealed his plans to film a new story about Frankenstein; he has invited the artist to the project, and Jones accepted the tempting offer. Still, the release date is unknown.