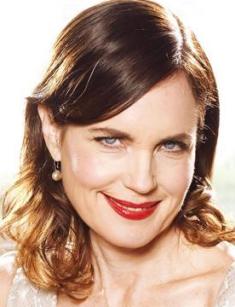 Elizabeth McGovern is an American actress of theater, film, and television, known to the audience for such works as Downton Abbey, Once Upon a Time in America, Ragtime, and Ordinary People. Elizabeth McGovern was born on July 18, 1961, in Evanston, Illinois, U.S.

The parents of the actress spent their entire life working as teachers. Elizabeth McGovern’s mother worked at school and father - at University. Elizabeth's paternal grandfather, an American traveler, anthropologist, and journalist, is said to be one of the prototypes of Indiana Jones - a fictional character born of the fantasy of director George Lucas.

When the actress was barely seven years old, she and her family moved to Los Angeles, where the head of the family received the position of Professor of Law at the local University. While still at school, Elizabeth already played in amateur performances, in which the talented student always got the leading roles.

After receiving her high school diploma, McGovern moved to San Francisco. There, the hardworking young lady studied acting for a couple of months and prepared for the entrance exams. After graduating from preparatory courses, Elizabeth quickly entered the famous Juilliard School of Dramatic Art.

In 1980, Robert Redford invited Elizabeth McGovern to her debut movie, Ordinary People, based on the novel of the same name by Judith Guest. The plot of the film tells the story of a respectable, wealthy family, experiencing a tragedy. Calvin was a successful lawyer who has had an incredible career, started a family with the woman he loves. Once terrible news came to his house, the eldest son Buck died in an accident.

He was a favorite of his mother, who had high hopes for him, so the youngest brother Conrad had the hardest time coping with the loss. The guy blamed himself for the death of his brother, as he was next to him on that terrible day, but could not do anything. The guilt and the realization that he would not be able to replace the deceased Buck lead the young man to the idea of suicide. However, the father noticed something wrong in time and saved his son.

Realizing that it was almost impossible to cope with all the problems and feelings alone, Conrad sought help from a therapist, which lead to irreversible consequences.

Two years later, Miloš Forman directed the drama Ragtime and invited MacGovern to play the leading role in it. It is worth noting that the movie, which is an adaptation of the novel of the same name by writer Edgar Doctorow, was the last work of actor James Cagney, who died in 1986 from a heart attack.

In 1984, Elizabeth McGovern’s early career started developing rapidly. The premiere of the gangster movie directed by Sergio Leone, Once Upon a Time in America took place. The story of friendship and betrayal of a group of gangsters who met in the early twentieth century in the Jewish district of New York and got rich during the prohibition in the United States is shown through a bizarre interweaving of memories, and opium dreams of the protagonist. This picture, in addition to Elizabeth McGovern, starred such actors as Robert De Niro, James Woods, and Tuesday Weld.

In the period from 1987 to 1990, Elizabeth Mcgovern's filmography on the IMDb was replenished with the movies The Bedroom Window, She's Having a Baby, The Handmaid's Tale, A Shock to the System and Tune in Tomorrow...

In 1993, the family drama directed by Steven Soderbergh King of the Hill premiered at the Cannes international film festival. The movie, which tells the story of Aaron, a teenager living during the great depression, was to the liking of the jury and the audience present at the festival.

The following year, the comedy The Favor, on which Elizabeth McGovern worked together with Brad Pitt, Harley Jane Kozak, and Bill Pullman, was released on the big screens. The movie tells the story of a girl from high society, who in spite of the overbearing aunt, plans to marry a simple, unremarkable journalist. Here McGovern got into the character of the main character's friend, a girl named Emily Embry.

The year 2007 was marked by the release of the biographical movie Daphne dedicated to the writer Daphne du Maurier. In the movie, McGovern got into the character of socialite Ellen Doubleday, with whom Daphne had an extremely strained relationship.

In 2010, the actress began acting in one of the most successful projects of her career, the series Downton Abbey. In the show, Elizabeth played Cora, Countess of Grantham. She is a brunette with blue eyes, impeccable hair, and refined manners.

Soft-spoken Cora can defend her point of view and get involved in an argument if she thinks she is right. She is much more receptive to change than other members of her family. She often covers the mistakes and misdeeds of their daughters, both out of love for them and practical reasons.

For her role in the series, Elizabeth McGovern received many prestigious awards and praising reviews.

In the same year, the premiere of Julian Fellowes’ feature movie Clash of the Titans, which is a remake of the 1981 movie of the same name, took place. The plot of the movie, starring actor Sam Worthington, is based on the ancient Greek myth of Perseus. This time, McGovern got into the character of the earthly mother of the conqueror of the Gorgon Medusa monster, a woman named Marmara.

Despite the popularity, McGovern, to this day, manages to avoid publicity of her own life. No matter how hard the media tried, they could not find compromising information on the actress.

Elizabeth McGovern has a net worth of $4 million. In 2019, the actress combines filming, playing in various performances and theater stagings, and recording a new musical album (Elizabeth McGovern is a singer in the rock band Sadie and the Hotheads). It is known that until the end of November, fans will be able to see Elizabeth McGovern in the production of Time and the Conways on Broadway in New York.

Besides, in September of 2017, the creator of the famous British series Downton Abbey, which is adored by Kate Middleton and Queen Elizabeth II, Julian Fellowes, told reporters about the beginning of the movie production-the continuation of the series. The motion picture premiered in September 2019.

Among other things, the premiere of the American-British action film directed by Jaume Collet-Serra The Commuter took place in January 2018.

It is this man who has to solve the riddle given to him by a mysterious stranger. In case of failure, the passengers of the train would not reach the final destination, and in case of a correct answer, the man would receive $75,000.

Despite her tight schedule, the famous actress does not forget about her fans. Not having an Instagram account, Elizabeth regularly puts photos from film screenings, as well as video clips from holidays on Twitter. It is worth noting that social media is not the only resource that tells moviegoers about the latest news from the life of this famous American. Information related to the creative biography of Elizabeth McGovern is also often published on various websites and in printed issues.