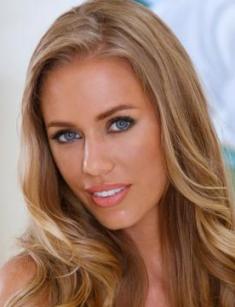 Nicole Aniston is one of the best pornographic actresses of the United States. The Californian blonde debuted in the genre in 2010 and continues to be one of the most demanded figures of the adult movie industry.

Ashley Nicole Miller was born on September 9, 1987, in San Diego. However, her origin is European: she has German and Greek roots that gave her non-standard beauty: fair hair and blue-green eyes.

The girl grew up in a ranch with lots of horses. As the actress told journalists once, she was not popular at school, but her elder sister made it feel better; Nicole calls her sibling “light of my life”.

The pornographic celebrity took the pseudonym “Aniston” due to her resemblance to Jennifer Aniston.

Nicole had her first shooting experience in 2010 and became popular two months later. Penthouse called her the model of the month in 2012 and awarded the Pet of the Year title in 2013. It took the actress only one year to receive several significant prizes, including the XBIZ Award and the AVN Award in Las Vegas.

According to Aniston, she is totally satisfied with her job: it gave her financial stability and high social status. The woman’s family supported her intentions and believed it was a legal and beneficial occupation.

Nicole works hard for her career: professional sport, complex care for face and body, cardio. She is not going to stop breaking new records: Aniston has set several goals that promise to become a peak in her pornographic activities.

The celebrity is an active social network user: she has been sharing her thoughts on Twitter since 2011, and her Instagram page is also full of bright pictures.

According to official sources, Nicole has no husband or children; she is a self-made business woman. Sometimes, the media report about Aniston’s short-term romances, but her busy schedule does not allow her to have a longer relationship.

Aniston loves chocolate. She mentioned in one of her interviews that she would choose forensic psychology if her pornographic career would fail. The woman likes to watch educational shows and spends a lot of time on self-development.

There were many rumors about Aniston’s romance with the model Chad White, who collaborated with Out Magazine, Love Magazine, and Flaunt, in 2014-2015. Still, there is no proof of that.

In 2018, the actress was busy with new videos and also created sports clothes meeting many requirements: comfortable, durable, and eco-friendly.

Nicole Aniston’s net worth is approximately $1 million in 2019.