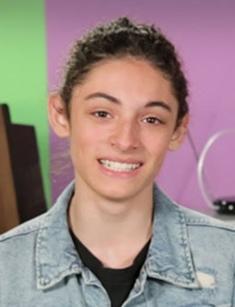 The American rising star, the young singer, wowed the nation in recent years thanks to his participation in the most prestigious TV musical competition. As an established singer, he has an outstanding talent and performed with original songs.

He was born in Washington; the singer spent his childhood in Seattle. Recently the boy finished Middle School. Since his early age, Benicio enjoyed singing songs, he started to sing at the age of two years and performed every family concert. His father is a chef. Besides Benicio, his parents have got one more kid – a daughter. When he was four, Benicio's father bought him a drum kit, because the little boy drummed everywhere those times.

As to musical education background, Benicio is mainly self-taught; he just attended guitar lessons for a short period. The boy came on his first musical competition when he was eight, though he was the youngest competitor among the other kids, Benicio took he second place. That time he understood that singing was his most significant life's ambition. He took part in the same musical competition three times and always finished the second. His date of birth is the 8th of September, 2004.

The path to success of the young singer began in 2017 when he appeared on the German musical contest aired on TV. Thanks to his singing videos on YouTube, he was recruited to this live show, "The Voice Kids," when sponsors of the show offered him the audition via Skype. As a contestant of the show, he displayed outstanding skills and motivation. He came to the final and placed the second. Though the contest gifted Benicio a lot of new friends, he found this competition stressful as he had to go on head-to-head battles with them.

On the 18th of November, in 2018, the young man released his debut single. He took part in several reality shows. Thus he sang a duet with Brandi Carlile the song "Joke" on "Late Night with Seth Meyers" in summer, 2018.

During his performances, he displays an impressive singing skill that can't leave the audience indifferent. The video where the singer sang his original song and played the guitar took four million views on YouTube.

However, the young singer gained the most significant national attention after his participating in the American reality show. The judges highly appreciated his "powerful vibrato" and "sky-high range." In August and September 2019, he performed with original songs and confidently went to the final. The other judge, Simon Cowell, also gave a blissful comment:

Thanks to the TV musical contests he gained wide popularity and recognition, his fame allowed him to do live concerts. Bryant has continued to share the video of his live performances on social media. He tries to spread his music and made his self-titled YouTube channel, here Benicio posted covers of popular songs Beyonce's "Halo" among them.

The young singer became the contestant of the show in February 2019. The sponsors of the reality show offered him and his family to visit New York and to come to the audition. Benicio and his parents doubted whether it was profitable for his career. They consulted with industry advisors, and they recommended to pass the opportunity. But the young singer decided to try himself on this show. He was ready for the stressful contest and wished to gain more American fans.

On the audition round, he impressed the judges singing the Brandi Carlile's 2017 Grammy Award-winning song "The Joke." More than nine million people watched this episode. His fanbase on Instagram rose from 18,000 subscribers to 145,000.

During the rest of the competition, the singer established himself as an accomplished artist performing his original songs. His musical style was called youth pop. The singer took standing ovations. Benicio said:

"I feel that I want to be myself, and I want to show people that. So I'm singing my songs".

This year Benicio tired the life of the professional artist, in spite of the fact he is only fifteen. He was tutored on the set and spent all his time with the show's staff. In the semi-final, he sang his ballad song "Fall Apart." After this song, the one judge Howie Mandel said that Benicio is the biggest star of this season. In the final, the singer sang another original; it was a simple stage layout with the guitar. He got standing ovation again. His performances were counted as flawless and robust.

Nevertheless, Benicio wasn't included in TOP-5 finalists. The last night the contestants performed with the established stars. Benicio sang with his idol, Ozuna. They sang a cover of DJ Snake's song Taki Taki. The winner of the show became the pianist Kodi Lee.

The teenager is active on social networks; he has got accounts on Twitter, Instagram, and Facebook. His ethnicity is White Caucasian. His religion is Christianity. His favorite celebs are Chris Evans and Margot Robbie. Besides, he draws inspiration from the biggest sensation in pop culture, The Weekend, and Justin Bieber.

The singer dreams of living in Miami. In his free time, he prefers to watch TV of play Cricket. His favorite dishes are burger and Oreo. Though the career of the singer has just started, the successful start allowed him to gain the fortune. His net worth is $600,000.

The young and promising singer hasn't gained any awards yet. But, with the rising popularity and recognition, nominations and prestigious awards won't be far behind. He was going to make a record and go on tour and believes that the popular musical competition was just beginning.