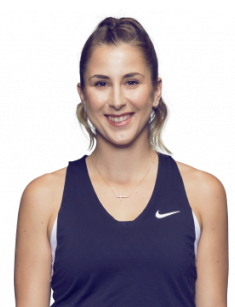 The professional tennis player who since she was two years old works hard and carefully. She has a unique style, many coaches and experts called her the smartest and the most promising tennis player of our days. Though she has already won numerous prestigious titles, but she is at the highlight of her career and showed promise to be the absolute champion.

As a child, she trained per hour every day. When she was four, she entered her first tournament. Belinda often played with opponents who were much older her. At the age of six, she also attended the tennis academy in the USA. Her father asked his old friend, an entrepreneur, to become Belinda's sponsor and help to build her career. When his friend agreed to invest in her daughter, Belinda's father quitted his job and traveled with her when she competed in the tournaments.

In 2004 she moved to Wollerau, where Hingis's mother opened the academy. As a teenager, she attended the academy, coached by Molitor, and worked with world-wide known tennis player.

Her career is divided into two significant periods – junior and professional as a junior, Belinda established herself as a highly prepared tennis player and was ranked number one junior world wide. She started to compete at the age of thirteen and was very successful. In the first year, she won the prestigious title – Grade A at the Abierto Juvenil Mexicano. She won a match after the match, title after title. The player became the world No. 1 junior in June and finished the season with the top ranking to earn the title of ITF Junior World Champion.

Displaying outstanding skill and endurance at the age of fourteen, she was capable of playing in the professional tournament. Since 2011 she plays as a professional player. In the first years, she tried to adapt to a new environment; several years later, Belinda began to prove all expectations and showed impressive results. In 2012 she became the newcomer of the year. In 2013, the athlete progressed from $10,000 tier events to the $25,000 and $50,000 levels. In 2015 she won the Roger's Cup. This victory is the most significant achievement in her life.

2018 is an important year for the tennis player when she passed the qualification in Luxemburg and came to the final. In November, she won the ITF tournament in the USA. In February 2019, she made a sensation when she confidently won the championship in Dubai. In 2019 she displayed her best result at the US Open when Belinda came to the semi-final. She also represents her country in international events.

She pays much attention to the technique. The tennis coaches called her the unbelievable smart and said that she always knows how to hit. She is an aggressive player, and she looks to endpoints with intelligent shot placement. She can hit many different kinds of shots in a single rally. Her court sense and tactical awareness are counted her strong sides. The athlete herself tells the following about her playing style:

"From when I was small, I knew that I would not hit the ball so hard. But I learned how to play smart, and when you combine a good sense and powerful shots with some quick shots, I think it's good".

Her primary coach is her father, a professional hockey player who spent all his life helping his daughter to become a champion. For two years she trained hard, the athlete also was coached by the mother of the professional player from Switzerland.

All her life is devoted to tennis. Since childhood, she attended the pieces of training with her coach daily. In the second part of the day, she trains with the other children. Her net worth is about $2 million. In 2019 she was called the highest-earning player. She is not married, but Belinda has a love affair with Martin Hromkovic, who is 15 years older. Belinda's boyfriend is a fitness player.

"It came a little unexpected, but it's an ideal situation. When I work on fitness in Slovakia, we can be together. As a tennis professional, relationships are so difficult. I do not see my best friend until half a year later. You never see another tennis player. A man waiting at home – no chance! Martin wants the best for me for my private life and sport."

Besides, it was reported that the tennis player had a relationship with Alexander Zverev. She is active on Instagram. She has a brother, who is a tennis player too.

At present, Belinda's net worth is estimated at about $2 million as of 2019.