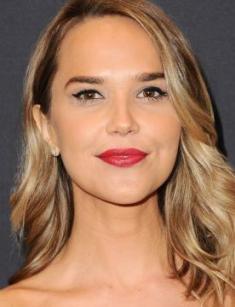 The future actress and model was born on February 19, 1985, in Winter Park, Florida. Since childhood, the world of cinema attracted Arielle. At first, she enthusiastically watched the 1989 Disney cartoon about the little mermaid of the same name. Then, she studied American cinema with her mother, Sheri, who was a producer, screenwriter, and director. The woman worked on the movies: Dan Behind His Eyes, Valse Memoire, and others. Sheri Kebbel also owns a production company and works as a talent manager.

Of course, seeing her daughter's pretty face and the interest in the film industry, Sheri contributed to the development of her career. The girl had a beautiful appearance because she is of English descent on the mother's side and German ancestry on the father's side.

It was not easy to get a role in a movie immediately, despite her mother’s good offices. So, while studying at school, Arielle began her career in the modeling business. Her height of 5.67 ft. (173 cm), a slender figure and a beautiful, childish, cute face contributed to the success.

Kebbel became a real sex symbol; her shootings for men's magazines were scheduled months in advance. The girl also participated in various competitions. In 2002, when the model turned 17 years old, she won the Miss Florida beauty pageant.

She was included in Maxim Magazine Hot 100 Girls List in 2005. However, the beauty was ranked only number 95. But after four years, Arielle turned up the heat and climbed to 48th place. In 2008, she was ranked number 54 in Croatian FHM's 100 sexiest women in the world list.

After graduating from high school, Arielle left her home and went to Los Angeles. There the producers quickly paid their attention to the attracting girl and offered her a small role in the television series Gilmore Girls. Later, the project was nominated for Emmy and Golden Globe Awards and was also cited in Time magazine as one of the 100 greatest television shows of all time.

Since then, Arielle Kebbel began her acting career. The start was successful, although she landed a bit part. The girl appeared in the projects: CSI: Crime Scene Investigation, Law & Order: Special Victims Unit, Entourage.

From 2005 to 2006, the actress starred in 13 movies. These were comedy, drama, and crime films. Kebbel’s filmography included the movie The Kid & I, the top-rated comedy American Pie Presents: Band Camp, Shark, The Grudge 2, Outlaw Trail: The Treasure of Butch Cassidy, and other works.

However, the number of roles sometimes exceeded their quality. In general, she played bit parts with a few lines. Arielle could not reveal her talent, but she showed her beautiful appearance.

Unfortunately, besides supporting roles, some projects with her participation did not advance beyond the pilot episodes (for example, Football Wives and No Heroics). Other projects became a box office flop and received negative reviews (Soul Plane and John Tucker Must Die).

So the actress became associated with the character of a pretty blonde, playing minor roles. It was necessary to change something, then Arielle began to attend auditions for drama and horror movies. First, the actress was cast for the horror film The Uninvited, and later she starred in the movies, Forever Strong and Freakdog.

In 2009, the shooting of the mystical series The Vampire Diaries began. Her colleagues on the set were Nina Dobrev, Paul Wesley, Ian Somerhalder. Arielle played a vampire named Alexia Branson. Her character appeared for five seasons of the TV show.

The role in the TV series The Vampire Diaries has become significant in Kebbel's career. Later, she was invited to star in the youth saga 90210, in the movie Hawaii Five-0, and the vampire series True Blood.

While filming in The Vampire Diaries, Arielle rarely took part in other projects, but in 2015, three movies with her participation were released. She appeared in UnREAL, Ballers, and Another Time. Two years later, she starred in the little-known TV series Midnight Texas, but in 2017, Arielle started a new chapter in her career.

In February 2017, the second part, entitled Fifty Shades Darker, was released. After a successful debut, the creators of the movie began working on the third part, planning its release in early 2018. Arielle Kebbel was invited to play one of the roles because her appearance was good for the erotic-romantic drama.

The hot girl has had several love affairs, but Arielle tries to keep her relationships a secret. Sometimes journalists write about her relations with partners on the set.

So, for example, it happened while working on The Vampire Diaries. Many people believed that the girl had a warm relationship with a colleague, actor Paul Wesley.

The actress is not married and does not have children, so colleagues and fans have a chance to win the heart of the beautiful lady.

Now the woman is more focused on a career that is rapidly gaining momentum. Kebbel travels a lot and spends time with friends. The actress shares the photos of her everyday life on the Instagram page.

Arielle Kebbel has a net worth of $3 million.