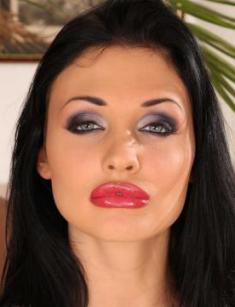 Aletta Ocean is an East-European pornographic star, number 21 in the world rating, and one of the top ten actresses according to Freeones.

Dóra Varga was born on December 14, 1987, in Budapest. She graduated from a prestigious college in the capital of the country and continued her education at a university. In 2006, the young woman won a beauty pageant and entered the world of modeling.

Aletta did some job before she began a pornographic star. First and foremost, the green-eyed beauty with a charming smile had breast augmentation; her cup size was increased up to five. She also made her lips fuller. The celebrity’s height is 5.68 feet (173 cm.); her weight is 132.28 lbs. (60 kg.).

The transformations proved to be useful for the career: Aletta’s ratings tripled two years after the debut. She received the first AVN Awards for Female Foreign Performer of the Year in 2010.

This is when the movie The Doll House was released; it was the turning point that made Ocean a recognizable figure in the industry. In the same period, she shot for Penthouse and Playboy in her home country. The audience knew her under various stage names: Artemis Gold, Aletta Florencia, Nikita Charm, and Doris. Directors liked the actress for the opportunity to use her in any genre, from classic sex to twisted videos of all kinds.

According to the star, only three stage partners have ever impressed her: Scott Nails, Johnny Sins, and Fabjizz. Overall, she has participated in more than 340 videos and collaborated with many studios, such as Naughty America and 21 Sextury.com.

The media did not have any information about Aletta’s relationships for a long time. The actress’s boyfriend helped her built the career: he worked in a pornographic studio and brought her there to work part-time.

Today, Aletta Ocean is an active Internet user; she regularly shares new photos on Instagram and posts some ten notes on Twitter. Judging by her pictures, the celebrity did not stop having surgery: she did the buttock augmentation. Still, fans did not appreciate it and emphasized her body looked natural no more.

If you compare photos from 2007 and present-day pictures, it is evident that Aletta had a rhinoplasty. However, surgery is not the only means the actress uses: she does a lot of sports, such as yoga and fitness.

Aletta Ocean has tattoos: there is a sneaking tiger on her back and the word “Savage” on her wrist.

In 2017, the woman was nominated for the XBIZ Awards as a best female performer; the Italian colleague Valentina Nappi surpassed her, though.

Aletta regularly shared photos with her boyfriend Daniel on Instagram; they looked happy in love, smiling. Whether it was the same man whom she had been dating at the beginning of her career remains unknown. The fairy tale came to an end in April 2018: Ocean posted the man’s picture and informed followers about his death.

People immediately started asking the star what had happened, but she gave no answers. There were many discussions on the young man’s page, too. Some people claimed he had had a car accident; another commentator kept convincing everyone that Daniel had committed suicide and mentioned they knew his mother.

The next week, subscribers returned to Aletta. They emphasized she did not mourn enough: five days later, the pornographic star wished everybody to have a good day and shared regular half-naked pictures within a week.

Today, the actress continues to shoot for adult movies and post hot pictures; she enjoys her life to the fullest. In July 2018, the celebrity spent her vacation in Greece.