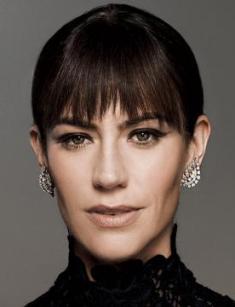 Maggie Siff is an American stage and screen actress who was nominated for the Critics' Choice Television Award in 2012. Although the filmography of this pretty woman has a few leading roles, viewers have remembered the characters of Maggie. She played in such remarkable projects as Grey's Anatomy, The 5th Wave, Mad Men, Sons of Anarchy, Billions, etc.

Maggie Siff’s biography is a closed book because the girl has spoken a little bit about her childhood and adolescence. But some facts help to lift the veil.

The famous actress was born on June 21, 1974, in the Bronx, the borough of New York City. Maggie's father was born in a Russian family and had Jewish ancestry, and her mother is of Irish and Scottish descent. Maggie said that she felt part of the Jewish culture. The girl was an artistic child; for example, in kindergarten, she loved using glove dolls to show amusing scenes to her teachers and friends.

While studying, the future star performed on the stage of the school theater, where she participated in classic fairy tales with a contemporary twist. Therefore, it is not surprising that later, the actress chose a creative path. It is known that Siff studied at The Bronx High School of Science and Bryn Mawr College, where she improved her English.

Before starting a film career, Maggie Siff had worked in the regional theater. The girl proved herself to be a wonderful dramatic actress, who easily coped with any role, should it be complex characters or comedic parts.

Thanks to her talent and acting skills, the green-eyed brown-haired woman won the Barrymore Award for Excellence in Theater for her role in the play Ghosts of Henrik Ibsen, one of the founders of modernism in theatre. The play tells of the ups and downs in Norwegian society, and its philosophical meaning is a scathing commentary on 19th-century morality.

Rumors have it that Maggie appeared on television by accident. To earn some money, the girl began to play in commercials for a restaurant chain, so the television producer noticed and offered Siff secondary roles in several TV shows.

Thus, the theater actress was destined to play in a big movie. Siff appeared in the drama Third Watch (2004), in the black comedy Rescue Me (2005), in which she was a speaker at alcoholics anonymous in the second season, in the police procedural Law & Order: Special Victims Unit (2006), etc. Maggie also appeared in the medical drama Grey's Anatomy (2007) and starred in the American TV series Nip/Tuck (2007–2008).

The actress made a feature film debut in 2007. It was Tony Gilroy’s legal thriller Michael Clayton. Siff played a bit part in this movie, but she was lucky enough to work on the same set with such stars as George Clooney, Tilda Swinton, Tom Wilkinson, Sydney Pollack, etc. In 2007, Maggie also starred in the romantic comedy Then She Found Me, but this film, in which Colin Firth and Helen Hunt played the leading roles, did not bring the girl the desired popularity and fame.

Siff became very famous in 2008, having starred in 79 episodes of the crime drama Sons of Anarchy. In this series, Maggie portrayed pediatric resident Tara Knowles, the beloved woman of Jax (Charlie Hunnam).

The actress also participated in Paul McGuigan’s fantasy movie Push (2009). The plot of this thriller cannot be called trivial as it tells about Nick Grant (Chris Evans), a second-generation telekinetic hunted by secret services that control people with clairvoyance and other supernatural abilities.

If the actress had previously played in drama movies, then in 2009, she changed her role and appeared in Judd Apatow’s dark comedy-drama Funny People. Although the movie tells of a stand-up comedian, it touches upon an important issue that every person on the verge of death rethinks his life values. The brilliant cast of this movie included Adam Sandler, Seth Rogen, Leslie Mann, and other famous movie stars.

Later, Maggie Siff, Edward Norton, and Susan Sarandon took part in the filming of Leaves of Grass (2009), the plot of which revolves around a pious philosophy teacher and his slob brother who trades drugs. Then Maggie landed roles in the TV series A Gifted Man (2011) and the post-apocalyptic movie The 5th Wave (2016), but even in these projects, Siff played supporting characters.

In 2016, the actress increased her popularity thanks to the TV series Billions, which was produced by Showtime. The plot of this multi-part drama tells about the epic confrontation of the ambitious financier, Bobby Axelrod (Damian Lewis), and the influential attorney, Chuck Rhoades (Paul Giamatti). The actress joined the main cast and played the role of Wendy Rhoades.

There is little information about the actress’s personal life, since Maggie Siff prefers not to make it public. She does not have pages on Instagram and other social media.

But it is worth mentioning that the woman has not been involved in scandals and fleeting intrigues. It is known that the beautiful lady is married to Paul Ratliff, and in April 2014, the couple had a daughter, Lucy.

In 2016, Maggie Siff starred in the melodrama The Sweet Life and the movie A Woman, a Part.

In 2017, the actress continued to participate in Billions. Thanks to high ratings, Showtime renewed the TV series for one more season.