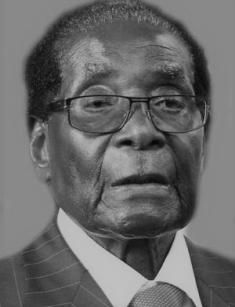 The bright political figure who started as a teacher. Once, he accidentally was involved in the political riots and was invited to talk with the crowd. This event changed his life radically. He felt the energy to lead the oppositional parties and struggle with the government. His career was prolific for some individuals, but as history shows, not for all the country.

The ex-president was born in the Jesuits’ village, named Kutama, on 24 February in 1924. His parents were ordinary people who had to struggle for life and live hand to mouth. As a boy, he preferred to read books to sports activities; that’s why the other children counted him a mother’s boy. Nevertheless, the Jesuits had much influence on the boy. Being raised in a strict atmosphere, the boy was becoming a devout Christian with intense self-discipline.

In the 1930s, the Mugabes had a tough time when they were expelled from the Jesuits’ mission village. Soon his father had to leave his family in search of employment. Then he abandoned his wife and six kids and stayed with the other women. Later the man returned with three new kids. His two blood brothers had died at an early age.

Despite poverty, the young man gained a good education. One of his first teachers was Father Jerome in his village. It was up to him to make a good base, which allowed the young man to continue educating the courses of teaching training.

He worked as a teacher at various schools around the country. He was impressed by the actions of Mahatma Gandhi at those times and also read Marxist tracts. He graduated from the university with a bachelor’s degree in English literature and History. Till the 60s, Robert continued to gain a splendid education and traveling. As a result, he was a young man with extraordinary skills with extensive knowledge from politics to American culture.

As a matter of fact, he didn’t keep in mind the political career. The young man devoted his first part of life to education and teaching. He got the scholarship and studied in one of the best universities in the African world. He never stopped studying, traveled a lot, and used every opportunity to get new knowledge. But once, in the 1960s, he was offered to speak with the crowd about the political situation in the country.

That was the starting point for his career as a politician. He was on the top of political governance during decades, and according to estimation for those times, the wealthy country transformed into ruins. He as damned as a terrorist by the oppressed people. In 2011 there was released a movie about the governor with interviews of the closest people.

In 1960 he was involved in demonstrations and protests. Being a much-respected person, Robert was invited to speak with the crowd. After these events, he changed his mind to be a teacher. He resigned as a teacher and decided to devote himself to activism. He served as a secretary in the national democratic party. As a publicity secretary, he was very emotional, hoping to widen people’s support of the party, which promoted traditional national values.

Racial violence, which was growing in the country, was necessary, as Robert thought it was up to racism to overthrow British dominance. Nine-month later, the party was banned, and all officials, including Robert, were arrested. He had been in jail from 1964 till 1974. Being imprisoned, Robert didn’t stop his education and graduated from London University with a bachelor’s degree in Law and Administration.

While he was imprisoned, oppositional parties were banned, and all leaders of the national movement were arrested. That time the government of the country was headed by Ian Smith. The nationalists, including Robert, launched the war against Smith and the government in 1972. He replaced the leader Sithole and became the new leader of the party.

In 1979 the participants of the war signed the agreement about a ceasefire. Robert agreed to protect the white community. He was opposed to the truce but had to agree.

In 1980 he ran for the prime-minister post in the electoral campaign. He was supported by the crowd and won the elections. During the campaign, he survived two attempts of assassinations.

As a prime minister, he continued to pronounce socialistic ideas but never did steps in this direction. These years the unemployment rose, there was a deficit in the budget. But under his influence, there was a massive expansion of education and health spreading. He focused on child immunizations, building schools, and protecting his power. He formed the elite military force and was afraid to lose power. He also tried to establish a business empire. He tried to lessen racial violence and build keen relationships with white citizens. Thanks to his efforts, the country became a de facto one-party state.

He became the president in 1987 when the parliament amended the constitution. After the collapse of the socialist’ regime in the Soviet Union, the president decided to establish free-market economics and accepted the adjustment program provided by the IMF. In the 2000s, the economy was deteriorated, the level of life was declined, and life expectancy reduced — the level of unemployment reached 50%. Robert blamed Western countries for these problems. He said that raising homosexuality was import from Europe. The president sent the military in Kongo when another war started.

The cost of war for Zimbabwe was $1 million per day. In 2000 the UK froze all financial aid to Zimbabwe. In 2017 the party demanded his resignation by noon the following day, or the party would introduce impeachment resolution against him. In his subsequent speech, Robert refused to announce his resignation. As a result, the party submitted a departure against him. Finally, the president agreed to resign, on the following conditions: his business interests stayed untouched, he would receive at least $10 million, and he and all his relatives were exempted from prosecution.

His net worth was about $20 million. The ex-presidents had a multi-story mansion with twenty-five bedrooms and two lakes. The executive director of democracy group Vanguard Africa told that Robert could dip his hands into state coffers or use the natural resource wealth of the country for his benefit.

He spoke English fluently, enjoyed playing cricket. People called him an exceptionally complex personality. His first wife gifted him a son, but they died from cerebral malaria when Robert was imprisoned. She also had a relationship with his secretary. In 1988, she bore him the daughter. Their relationships kept in secret. In 1996 the couple was married when his previous wife died. His children are famous for their lavish style of life.

In 2018 he was unable to walk and passed the medical treatment in Singapore. On the 6th of September, he died at the age of 95. As it was reported, he had a censer. Robert’s funeral was helping on a Stadium, which was a quarter filled.

As the politician had a long-lasted political career, his ideas were formed on the particular ideology – mugabeism. It represents patriotism and left-nationalism. To others, mugabeism became the symbol of crisis, tyranny, and chaos.