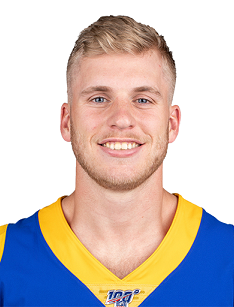 Cooper Douglas Kupp is a talented American football player. He plays for the Los Angeles Rams of the National Football League (NFL). He played college football at Eastern Washington and received All-America honors. The player was drafted by the Rams in the third round of the 2017 NFL Draft. He is famous for being the best wide receiver.

Kupp was born in Yakima, Washington, U.S. He is from a family of sportsmen with dazzling careers.

Cooper's dad, Craig Kupp, is a former NFL quarterback, who was a talented sportsman. Cooper's younger brother, Ketner Kupp, is also a man with a remarkable career.

The grandfather of the player, Jake Kupp, was an offensive lineman for the University of Washington, who was named to the franchise's 25-year All-Time Team.

In 2012, the future sport star got his education at Davis High School in Yakima. Cooper played two sports: football and basketball. Cooper was awarded several titles for his excellent achievements in football. The player finished his senior season, setting a school record.

In 2013, the sportsman started to play for coach Beau Baldwin's Eastern Washington Eagles football team. He performed well during the whole season and was named Eastern's Offensive Scout Team Player of the Year. The season was a big success as Cooper received single-season school and national receiving records. The player was the first freshman wide receiver to be named as a first-team All-American since Randy Moss in 1996.

Cooper finished his sophomore 2014 season with brilliant results. He also got many awards for his skills and exceptional performances during the 2015 season, including the Big Sky single-season record.

In 2017 the outstanding athlete has become the top performer at the Senior Bowl. Kupp attended the NFL Scouting Combine in Indianapolis and completed all the combine drills except for the bench press.

The Los Angeles Rams selected Cooper in the third round of the 2017 NFL Draft. He was the seventh wide receiver drafted in 2017 and became the second-highest pick in Eastern Washington's school history.

Cooper made his NFL debut in the Rams' season-opener against the Indianapolis Colts. He started his NFL career in the victory over the New York Giants. He also contributed to the victory over the Houston Texans. By December, the player was named a full time starter at wide receiver. He ended his 2017 season with stunning success.

In 2018, the player appeared in his first career playoff game. Cooper had a position of a starting wide receiver. Unfortunately, the player suffered a knee injury in a game against the Denver Broncos. Because of the trauma he had missed the next two games. Cooper made a comeback in the field in a match against New Orleans Saints. The player suffered another injury: he tore his ACL during the victory over the Seattle Seahawks. Unluckily for the player and the team, he had to finish his season prematurely.

In 2019, after Cooper became healthy, he appeared in time for the Rams' season opener against the Carolina Panthers. He performed in a game against the Cleveland Browns, and the team succeeded in winning the match.

The stats of a professional player, his auction value, draft value, and the results of the best games are broadcasting on TV channels, such as ESPN and Fox Sports, as well as on the Internet. According to Fantasy rankings, Cooper has been a must-start through the first quarter of the 2019 season. He was on pace for a very strong year before tearing his ACL. The player has been listed in the top chart together with Emmanuel Sanders, an American football wide receiver for the Denver Broncos.

The official clothes and gear of a sportsman are sold on the official sports websites. The fans of the sport star can buy jerseys, personalized pint glasses, beverage cups, nameplates, tumblers, and other accessories with team symbols.

The football player is a married person. He met his wife Anna Croskrey, when he was studying at the University. The duo became an official couple in June 2015. Cooper and Anna are parents of a son, Cooper Jameson Kupp, who was born on July 3, 2018.

The athlete is an active user of Instagram. He has over 110,000 followers who have been following his achievements and progress in sports from the early start. The sportsman has many personal photos with his beautiful wife and a little son. There are many pictures taken in their house and outdoors. The athlete is proud to have such an amazing family.