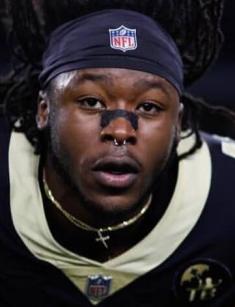 Alvin Mentian Kamara is a professional football player. He was born on July 25, 1995. His precise birthplace is the city of Atlanta. Alvin is of American nationality and mixed ethnicity. The faith he believes in is currently unknown.

Having a weight of 98 kg and a height of 1.78 m, Alvin played football for the NFL (National Football League) and New Orleans Stains. Alvin studied at the University of Tennessee and Hutchinson Community College, where he also trained a lot. By the way, Alvin is considered to be the 2nd player in the history of the NFL who scored six rushing touchdowns in a single game.

Even though Alvin often talks about his family, he never says anything about his dad. Nothing is known about him either. All the information available says that he was raised in Georgia by Adama Kamara. His mom has Liberian roots.

His career started when Alvin played football in college. He was a running back for the University of Alabama, Hutchinson Community College (2014), and the University of Tennessee. Alvin has spent five seasons with the Saints. He has 912 carries for 4,238 yards, 373 receptions for 3,263 yards, and 68 touchdowns. He was chosen to participate in three Pro Bowls and was named Offensive Rookie of the Year.

Alvin is kind of low-key and prefers not to talk much about his personal life. All his free time is filled with intense training. Anyway, he is probably in a relationship with his girlfriend, Te'a Cooper. She is an athlete too and plays basketball.

Alvin is not only an athlete but also a fairly successful entrepreneur. So, he is the owner of Big Squeezy, which produces and sells juices and smoothies. Branches are located in cities such as Hammond, Mandeville, New Orleans, and Baton Rouge. In February 2021, his business sponsored NASCAR. Therefore, NASCAR even appointed him as Growth and Engagement Advisor on June 20, 2021.

However, Alvin also had problems with the law. For example, on February 6, 2022, after the Pro Bowl in Las Vegas, Alvin was arrested. He was then placed in the Clark County Detention Center for battery causing significant bodily injury. The incident allegedly took place the day before at a local nightclub. After the CCTV footage became available, it turned out that Kamara had fighted the man eight times.

Alvin is the first FNL player who recorded at least 500 rushing yards and 500 receiving yards in each of his first four seasons. Here is the list of the records he gained throughout his entire career: