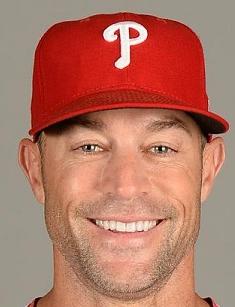 Phillies manager Gabe KaplerGabe Kapler, is an American Baseball player who is best in the sports industry for winning the world championship in the year 2004 as the member of the team Red Sox. In his 12 years long career, Kapler played as an MLB outfielder for six different teams.

Kapler was born in Hollywood, California. He has a talented father, Michael Kapler, who is a musician. Kapler's mother used to work with children.

At the age of eight, Gabe suffered in the accident. After being hit by a car, he had to take a therapy because he had a fear of crossing the street.

The future baseball star got an education in Los Angeles. He played for the school's baseball team, showing excellent results.

In the period from 1998 till 1999, the athlete played for the Detroit Tigers. When the budding player was 22 years old, he had his first debut in sports playing in Major League.

Kapler hit two home runs on Opening Day in the 2000 season for the Rangers, becoming the first player to homer in his first two at bats as a Ranger. He was named the American League's Player of the Week.

In 2001, his perfect results brought him to popularity among other notorious sportsmen.

After that, he again changed the team. From 2003 he performed for the Boston Red Sox team till 2004.

In 2004, when Shawn Green, an American former Major League Baseball right-fielder of the Dodgers announced that he would not play on the holiday in Judaism, Yom Kippur. That's why Gabe Kapler was asked to replace Green. At first, the player hesitated. He even consulted with his colleagues. Everybody supported him and Gabe Kapler took a decision to perform on holiday.

This period in his life was special for him. Kapler remembered himself writing a report about Japan at school. He felt that it was a life-changing moment. In Japan the player performed in 38 games and was placed on the inactive list by Yomiuri in the 2005 mid-season.

After that, Kapler moved to another Boston Red Sox team. He had been performing for the team from 2005 till 2006. By mischance, Gabe suffered trauma in 2005. Doctors prescribed him an operation and the player finished his season. Less than in a year, he got better and came back to sports. After the returning the baseball star managed to show great results in 2006. At the end of 2006, the athlete decided to leave professional sports and retired.

However, he didn't quit baseball in general. He started the career of a manager in 2007, serving the Boston Red Sox for one season. He felt blissfull to try himself in a new position.

Much to the surprise of many, the player announced in 2008 that he missed being in a field as player, so he returned to play Major League Baseball. According to many views, Kapler made up his mind to come back not because of money. He really desired to play and win. He was in great shape, especially in comparison with other players. He was strong and full of passion for baseball. Moreover, after performing in first matches, Gabe impressed other managers with his skills. It seemed that he hadn't left the field. Gabe began the season as the Brewers' hottest hitter.

The stats of the year 2016 demonstrated amazing results that the player had made. In 2008, Kapler filed for free agency.

The player was named one of the best in baseball against left-handed pitching. Many sportsmen admitted his value beyond the field. Kapler was proud to have extensive knowledge and experience that he gained throughout his career.

Joe Maddon, interview manager spoke out about Gabe. He expressed his admiration and respect for the great baseball star. The player made several appearances in 2010 and became a free agent after the season. In 2011, he signed a minor league contract with the Los Angeles Dodgers.

After leaving the field, Gabe has become a coach for the Israeli national baseball team in the 2013 World Baseball Classic qualifier in September 2012.

He also was engaged in television. In 2013, he was offered to work as an analyst for sports channels. He ran programes with great success. The player, with his enormous life experience, was happy to give advice to young baseball players. Gabe has one more talent besides sports. He showed great skills in writing, while working in several print media.

In 2014, Gabe he appeared to be in a new role, having become the Dodgers' new Director of Player Development. The player had many ideas that he managed to translate into reality. The sportsman was focused on organic food. From his point of view, nutrition and a healthy lifestyle take one of the biggest roles in making progress in sports.

The player gave many interviews. In 2019, he had an intriguing conversation with Angelo Cataldi, a popular radio personality. The two had a heated talk about Andrew McCutchen’s injury.

In 2017, the Philadelphia Phillies announced that they had hired the 42-year-old Kapler as their new manager. Phillies General Manager and principal owner noted that they were impressed by his level of professionalism and skills in working with people.

In 2019 he managed the team to an 81–81 record, Philadelphia’s best record since 2012 when they also had a .500 record. Following the season, Kapler was fired. Kapler is often compared to another famous manager Charlie Manuel. There are different points on the question: who is better in a position of the team manager. Without any doubt, the two made did best to improve the results of the team.

The player was married to his ex-wife, Lisa Jansen. They have been together for 15 years since 1999. The duo met at high school and fell in love with each other. The beautiful couple had two sons. But their marriage broke up in 2013, but the parents continue to maintain their children together.

An interesting fact is that Gabe and Lisa decided to make a Gabe Kapler Foundation. This organization helps in educating the people about domestic violence.

The handsome player appeared on the cover of several fitness magazines. He also took part in the advertisement.

Worth mentioning, the sportsman has any tattoos on his body.

Gabe keeps up an interesting blog that touches on everything from fitness, nutrition, health, and more.

The net worth of the player is estimated at about $30 million.

The baseball player is Jewish. That is why he tattooed a Star of David on his left calf and the post-Holocaust motto "Never Again". The sportsman is very proud of his heritage. The athlete has also a nickname - Hebrew Hammer. It was given to him for his frequent longball hits, along with the fact that he is Jewish.