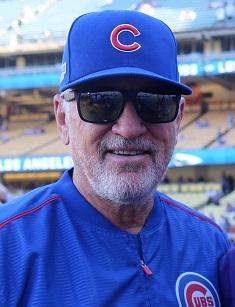 Joe Maddon is famous for his impressive results in sports. Now he is an American professional baseball manager for the Los Angeles Angels of Major League Baseball (MLB). He is a famous manager with a long-lasting career, who demonstrated excellent skills in managing numerous baseball teams.

In 1994, Joe began his career as a coach in MLB with the Angels. After that he worked with the Rays, bringing the team to a high score in 2008. In 2015, Joe received the title of the 2015 National League Manager of the Year for leading the Cubs to victories: in 2016, he succeeded in conducting the team to their first World Series title. The career of this sportsman is of great interest, although Maddon started as a player, he was able to become an excellent coach and achieve great success.

Joe Maddon is of Italian ethnicity. His family lived in an apartment over his father's plumbing shop. The kids lost their father; he died in 2002. Joe was very close to him, and in 2016, he even put on an Angels hat on the field after the Cubs won the World Series to honor his father.

Maddon stays in touch with his mother through his sister, Carmine, who still lives in Hazleton. Joe has a brother, his name is Mark, and he decided to follow his father's career path as a plumber.

Joe started to play sports when he studied at Lafayette College and graduated in 1976. He competed in baseball and football teams. At that time he began to have ideas about continuing the career of an athlete.

After years of performing in the field, in 1979, Maddon took a decision to leave his playing career and become a coach. Initially, he was a scout and then became a manager in the Angels farm system. He also had the position of Minor League roving hitting instructor.

During 2006–2014, Joe managed the Tampa Bay Devil Rays. As a manager he preferred to be patient in his work and tried to prepare young players for great achievements in the future. His management methods worked well: Joe managed to lead the team to excellent results. In 2014, the team faced some difficulties: the Rays dealt with a lot of injuries and was eliminated from postseason contention. Same year, Andrew Friedman, an American baseball executive, left Tampa Bay to take the role of President of Baseball Operations for the Los Angeles Dodgers. The Rays made aggressive attempts to re-sign Maddon, during that period, and Joe refused to sign a contract. He ended his season and joined another team.

From 2015 to 2019, he was a manager of the Chicago Cubs. He led the team to 108-year World Series Championship drought. Joe again proved his professional skills in managing and he was compared to the best managers after his victories and a team records. But after the team quit from the 2018 playoffs, it was decided that Maddon would leave the Cubs.

After the Chicago Cubs declared that Joe Maddon wouldn't return to the team next season, a member of the 2016 World Series-winning squad, David Ross, paid tribute to the talented manager. Ross posted a photo to his Twitter feed thanking Maddon for his contributions to the team’s legacy.

In October, 2019, Joe Maddon signed a new three-year deal with the Angels for the 2020 season. Los Angeles Angels hired Joe Maddon as manager after the story with drug investigation over the team. Maddon took over a talented team that faced some troubles: the death of hurler Tyler Skaggs during the season and the federal drug investigation involving a team official that resulted from it.

Skaggs’s death has prompted the players’ union and Major League Baseball to re-evaluate their drug policy, which does not test major leaguers for opioids. They have reopened the collective bargaining agreement in the past to strengthen the drug program, and seem likely to adjust it again soon. Joe Maddon said that he is going to fix the problems on the field and in the clubhouse.

Joe is engaged in charity work. His organization was made to host a charity golf tournament annually in his hometown. The organization helps to support young citizens. The manager also sponsors a charity boxing event held in Chicago. His wife Jaye supports her husband in this beneficence; she has also raised funds for several charitable institutes.

Maddon is a married man. He has two children: daughter Sarah, and son Joseph Maddon III from his first marriage with Betty Maddon.

Now he lives with his second wife, Jaye Sousoures. The couple got married in 2008. He met Jaye first in 1995 at the Rossmoor Athletic Club, where she worked as an accountant. They began dating in 2004. At present, Maddon is a happy grandfather; he is proud to have five grandchildren. Joe Maddon and his wife have several dogs. They are two English bulldogs: Winston and Clementine.

According to the media, Joe Maddon has tried his hand at the catering business: he has opened a restaurant named Ava in South Tampa. He owns a Home in Tampa, which he bought for $1.76 million.

Joe Maddon stars in commercials, he is sponsored by Gold Bond Cooling Talcum and has several endorsement deals in addition. Maddon's career stats as manager also compare favorably to the rest of the league. He is No. 40 among all-time managers with 1,252 wins. Speaking of Maddon's yearly salary, it is close to $1.8 million. The net worth of the manager is estimated at $12 million.