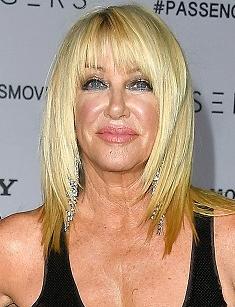 The actress has had not simple life since her childhood, but thanks to her perfect complexion and artistic nature she became a highly demanded actress and sex symbol of the era. Though her career has both ups and downs, she is a legend of the cinematograph thanks to her memorable roles.

The actress was born in the Irish-American family, her mother was a medical secretary, and her dad was the gardener. The actress had a tough childhood. Her father was an alcoholic. The girl grew in fear. She has dyslexia and didn’t exceled at school. However, she was good at arts and participated in the theatre program.

Her movie career started in the 60s when the young Suzanne took her first small roles in movies. In 1974 she appeared as a topless girl in "Magnum Force," three years later, she gained the guest-starring position on "The Six Million Dollar Man."

Her most memorable role is the beautiful lady in the popular TV series. She plays stereotypically dumb blonde, an office secretary. The intricate plot and bright work of actors made this Tv series very popular. Suzanne gained the reputation of a sex symbol. The media proclaimed her the show's breakout star. Thanks to her mainly, this show transformed into a TV phenomenon.

The sitcom had several seasons. That's why the actress gained constant work, but one day she felt that it wasn't enough and noted her terms of employment. The actress demanded to raise her salary from $30,000 to $150,000. Suzanne also wanted ten percent ownership of the show's profit. The channel rejected her demands; in reply, the actress boycotted the shows of the season. Her role was cut and was lasted for sixty seconds in each episode. Later she sued the show for $2 million, blaming it for loss of credibility. The court agreed only that she was owed $30,000, due to the episode for which she had not been paid.

Before this feud, the channel planned to make Suzanne's show, but after changings in the administration, the show was canceled. After this scandal the actress moved to Las Vegas, where became an entertainer. Due to her dyslexia, she had to dye her shoes in different colors to make dancing performances.

In 1980 and 1984, the actress appeared on two covers of Playboy. In 1970 she appeared on a test photoshoot for the magazine. She denied to pose nude before the actual shoot and was accepted as a playmate candidate. Ten years later, the magazine decided to publish her photos. Suzan aimed to find the money for her son's rehabilitation after a car accident. When her photos were published, her son was fourteen. She was anxious about how he would react, seeing her mother nude. The actress sued the magazine and got $50,000. In 1984 the actress appeared on the cover again after she discussed it with her family and decided to control the quality of photos.

In 1987 she appeared on TV series, which was run in first-run syndication. In 1990 she finally returned on TV and appeared in numerous guest roles. In 1991 she gained critical success and the second wave of popularity playing on the sitcom "Step by Step." In 1994 she also hosted her show, but only for one season.

2005 was a significant year for the actress as she made her Broadway debut. But the show was canceled in less than a week due to poor critical and commercial success. In 2015 she participated in the other season of Dancing with the Stars. She and her partner Tony Dovolani ended the 9th.

Her first marriage proved to be rather brief. She married at the age of 19 in 1965, her marriage came to an end three years later, but this relationship gifted her a first child, a son Bruce. The actress wasn't happy in this relationship; as a result, she had a love affair with her former teacher.

Later she met her second husband on the Anniversary Game when her future husband was a host. Meanwhile, Suzanne was a prize model. The couple tied the knot in 1977 since those times, they have always been together.

As it reported, the actress was pregnant in her second marriage, but she made an abortion because she wasn't ready to become a mother again. Her husband has got children from a previous marriage. Though she has gained only a blood child, the actress has become a grandmother six times.

In 2000 she was diagnosed with the second stage of breast cancer. She had surgery and then radiation therapy. In 2007 it was reported that her house was destroyed by the wildfire. The actress is a supporter of the controversial therapy. She shared her experience of using hormones in her book "Ageless," but the actress was criticized for the advocacy of unproven and dangerous medication. In her other book, "Knockout," she tells about the alternative ways of struggling with cancer, the actress was criticized again. She also stated that the wrong diet with a high level of toxins might be the reason for the crimes. Her estimated net worth is $100 million.

On her 73 birthday the actress posted a photo on Instagram in her special “costume” – on the photo the actress was sitting in the field absolutely nude. She called the post “Here I am at 73 in my birthday suit!”