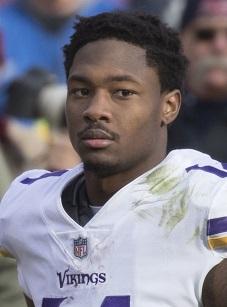 The talented wide receiver Stefon Diggs is a famous figure in American football. He was a fifth-round pick of the Minnesota Vikings in 2015 and was the second-ranked receiver in the nation coming out of high school. Let's find out more about this popular sportsman.

Speaking of the background of the player, his birthplace is Gaithersburg, Maryland, USA. His parents are Aron and Stephanie Diggs. He grew up along with his brothers: Darez and Trevon. All three brothers played football at three different high schools.

The family lost their father Aron, when he died in January 2008 at the age of 39. The cause of death was a congestive heart failure. Stefon was 14 years old when his father passed away. After that he became responsible for his younger brothers. He even decided to stay close to his mother and siblings when the time came to enter the college and get an education.

According to his words, he has always been in great athletic shape. He studied at Our Lady of Good Counsel High School in Montgomery County, Maryland, where he played football.

After finishing the High School, Stefon started to attend the University of Maryland in College Park, Maryland. He played on coach Randy Edsall’s Maryland Terrapins football team from 2012 to 2014. He demonstrated his talent and skills and was selected second-team All-ACC return specialist in 2012. Diggs finished second to Duke’s Jamison Crowder for ACC Rookie of the Year. In 2014, Stefon was selected second-team All-Big Ten in recognition of his successful junior season.

After his junior season, the sportsman decided to enter the 2015 NFL Draft. He signed a four-year, $2.5 million deal with the Minnesota Vikings.

During his rookie year in 2015, the player had his first career start in a game against the Kansas City Chiefs. He took full advantage of becoming the first Vikings' receiver since Week 14. Stefon officially received the starting wide receiver role. He performed in games against Green Bay and Chicago Bears. Despite being inactive for the first three games of the 2015 campaign, the player led the Vikings to good results.

In 2016, in the season-opening game at the Tennessee Titans Stefon stayed the leader of the team. He amazingly performed in a game against the Green Bay Packers and was named NFC Offensive Player of the Week. After Week 2, he became the leader in receiving yards in the NFL. The sportsman played in a duo along with Adam Thielen. His 75% catch rate ranked fifth among NFL wide receivers in 2016.

In 2017, Stefon made an impressive performance against the New Orleans Saints, and he also showed a perfect score against the Tampa Bay Buccaneers. He contributed to the victory against the Chicago Bears. However, he had to leave the field early after getting an injury. Even after missing two straight games, he remained 13th on the list for receiving yards.

In 2018, the player signed a five-year contract extension with the Vikings through the 2023 season.

In 2019, he performed against the Green Bay Packers, the Chicago Bears, and the Philadelphia Eagles.

There were rumors that the player wanted to quit the team. Diggs would not say if his agent requested a trade. He said that he didn't discuss anything concerning this question when asked whether he had officially requested to be traded. ESPN reported the Vikings had no intention of trading the receiver. However, the player has sent a series of doubtful tweets mentioning the potential unhappiness amid a frustrating start to the Vikings season. He has been unhappy with his results. But later he noted that he was just trying to work through it.

It was suggested the Patriots could be a potential destination of the player after he skipped multiple meetings and practices. The likelihood that the Minnesota Vikings will trade Stefon Diggs is close to zero percent. The player missed practice after a brief sickness, but Buffalo Bills fans saw the Diggs’ news and turned social media into rumor central. The Vikings are sure that Diggs isn’t available for any trade. Stefon admitted that he took accountability for his actions, having skipped practices. Later the player made the strongest endorsement of his future with the Vikings.

As it's known, the player is not dating anyone at present, so most likely, he is single now. He has been married to Tyler Marie and has a daughter who was born in 2016. It is not clear if they are still involved romantically recently; he was linked to singer Bridget Kelly. Currently, there is no information about Stefon’s girlfriend.

Stefon Diggs is an active user of Instagram, where he has over 610,000 of followers, although he has not so many photos on his page. Most of his pictures are from football matches, but sometimes he shares his everyday looks. The fans of the player adore his style of clothes. Stefon is a big motivator for many people, including his readers. He adds motivational captions to his photos: “No matter what, put your faith and trust in God”. He reached unprecedented heights in sports at such a young age. So he shows with his personal example that everything is possible when you work hard.

The sportsman also has a Twitter account with 245,000 readers, where he posts the latest news from his sports life. There is a popular hashtag on Twitter #StefonDiggsWatch.

The stats of the player is on the Dynasty League Football website. The net worth of the sportsman counts $5 million. His earnings come mainly from his professional career. The player also has been engaged in TV commercials, including Bridgestone company and an American auto insurance company, GEICO.