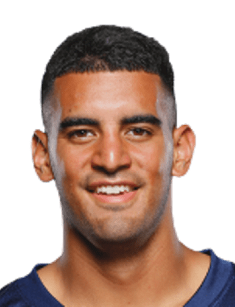 Marcus is a talented footballer with a perfect physique. As an athlete from nature, he made numerous praiseworthy performances both in his college and professional period. The career of quarterback has its ups and downs, as he suffered several severe traumas. Nevertheless, he remained one of the beloved sports personalities giving a perfect example for the growing generation.

He was born in the middle-class Samoan-German family on the 30th of October in 1993. Since childhood, he dreamt of becoming a professional football player and admired the game of his Samoan players. He has a brother who enjoyed playing football too. The boy had a perfect physique and was a school star in track and football.

He gained much popularity as a senior when he helped his team to win the prestigious title. Marcus also seriously participated in the jumping and sprinting events. In 2010 he was called the fastest after running with impressive stats.

He attended the university in Oregon. His family met significant financial difficulties, as Marcus' coaching demanded substantial expenses. The parent didn't stop believing in their son, and one day they sold their house to give Marcus the best coaching.

In one interview, Marcus shared the secrets of his success:

"I learned a long time ago through my dad that you shouldn't compare yourself to others—just because that hampers how good you can be. I don't compare myself to anyone. Growing up, sure you have your favorite players or guys you try to emulate, but I'm just trying to be the best me I can be."

During his time in Oregon, he proved to be active both in the field and in life, helping the Eugene community. Contributing to the community was a massive part of his life and one of the positive.

The professional football coach discovered Marcus in 2010. He saw the athlete and immediately offered him a scholarship. That year Marcus proved all expectations and was called one of the most prospective players. During his college period, he gained numerous awards, Sports preforming canter was named in his honor. 2015 was a particular year for Marcus. This was his rookie year for the Titans in Tennessee. This year he gained so much love and fame from people; thus, he had the best-selling jersey. Marcus called his success something surreal and a big honor. He signed a four-year contract. A knee injury was marring his rookie year in week 15.

The team announced that the player had MCL sprain and would miss the rest of the season. Next year Marcus played with the impressive statistics, but in week 16, he fractured his fibula and had to undergo a surgery. The 2017 year was highly productive for Marcus. As a result, the team picked up the fifth-year option on the player's contract. The season began for him from an injury. He had to miss week 2. Next, games he continued to be useful, but his statistics began to deteriorate. He ended the 2018 season with a career-low 11 touchdowns, eight interceptions, and a career-low 2,528 passing yards.

On the 13th of October, he was benched in the third quarter and was replaced. The big fanbase of Marcus was deeply sad about this news. Now his future is unknown, though several experts foresee his draft to the other team, as not the Titans have one more quarterback than they need. Nevertheless, the coach of the Titans left the door about Marcus' future.

Marcus himself commented on the latest news. He said that his replacement doesn't mean the end of his career:

Having been a sports enthusiast since his childhood, Marcus continues to stay fit and interested in sports. The footballer prefers to keep his life secret. He doesn't share his private life on social platforms. Nevertheless, his relationships with his girlfriend from women soccer are widely known. Rumors have it that Marcus has being dating with her since his college years. His net worth is more than $24 million. In his first season, his earnings were about $4,400,500. Marcus is a dedicated Christian.