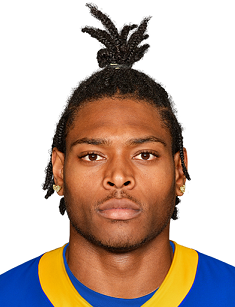 The Smyrna native, Jalen Ramsey, started a football career in NFL in 2016 as a rookie of Jacksonville Jaguars. He became the fifth number of 2016 Draft. He played at a cornerback position and was the 2017 and 2018 Pro Bowl participant. Ramsey is one of the NFL’s best young cornerbacks, trash talkers, and also a father of two daughters (born in 2018 and 2019). The footballer’s net worth is roughly estimated at $10 million, including all of his properties and earnings.

The birthplace of Jalen was Smyrna. He was born to his dad, Lamont, and mom, Margie, on October 24, 1995. Jalen grew up in a sports family. His elder brother, Jamal, was involved in football and played for school and later college teams. Jalen liked to spend time with Jamal playing football and repeating various tricks after him. That allowed Jalen to compete on equal terms with older guys in local fields.

Jalen was the blond sheep of his family, as he was the only one who was a fan of Miami Hurricanes. Following his interest, the boy joined his school’s football team. He studied at the private school, the Ensworth School in Nashville. A year later, he moved to a coeducational Christian independent college preparatory school, named Brentwood Academy. Jalen quickly became its football and track and field star, recording several state records.

Rivals and Scout rated Ramsey five stars before his final school year. In July 2012, the player verbally committed to sign with the University of Southern California (USC), recruited by Tee Martin. However, in February 2013, five-star cornerback switched his commitment and announced he would sign with FSU thanks largely in part to the work of the head coach, Jimbo Fisher, and their new defensive coordinator, Jeremy Pruitt.

Jalen arrived on campus amid a ton of hype, as he was considered one of the nation's top 15 players overall and one of the top three cornerbacks in the 2013 recruiting class. He took the #13 jersey of Florida State Seminoles, and immediately became the starting cornerback. In his freshman year, Ramsey led FSU to the 2014 Vizio BCS National Championship Game, where Seminoles won Auburn Tigers with 34 – 31.

Ramsey finished his debut season with 49 tackles, including two tackles for loss, an interception, a forced fumble, and a touchdown. With a year of experience behind him, Ramsey was looking to build on those numbers by being more technically sound. While he relied on his quickness to get away from big linemen throughout the 2013 season, he realized that becoming more of a technician would make him that much more difficult to stop in 2014 season.

Preparing for his sophomore campaign, Jalen knew he would play multiple positions, in addition to being a team leader. In summer Ramsey spent countless hours in the Seminoles' meeting rooms watching movie of former FSU defensive back, Lamarcus Joyner. That hard work paid off, as Jalen finished her second season, recording 80+ tackles in 14 games, including ten tackles for loss, two interceptions, and three forced fumbles.

The Seminoles won the Atlantic Coast Conference second year in a row in 2014. The junior year became less successful for Ramsey than the previous two, as he showed his lowest collegiate stats. However, his new teammate, Derwin James, compensated for all Jalen’s flaws. The duo became outstanding that year.

In September 2015, the Smyrna native returned a fourth-quarter fumble 36 yards for a touchdown as the Seminoles held off an upset attempt by Boston College with a 14-0 ACC victory over the Eagles. That win became Florida State's 25th straight in the conference and its 13th straight road victory. Ramsey ended his college career with 52 tackles, including 3.5 tackles for loss in the 2015 season. On January 5, 2016, Jalen declared for upcoming NFL Draft.

Ramsey was the top-drafted cornerback of the 2016 Draft. He was selected fifth by the Jacksonville Jaguars. In May the sides signed a four-year $23.4 million deal. During training camp, the rookie got injured several times, but he could quickly recover and became the player of season’s starting roster. In his first two seasons, Ramsey started all 32 games and didn’t miss any of them. He recorded 128 combined tackles and four interceptions.

In December 2017, a Brentwood Academy graduate was named to his first NFL Pro Bowl. Ramsey had four interceptions and led his team with 17 pass breakups that season. He joined by three Jaguars teammates, including cornerback A.J. Bouye, defensive end Calais Campbell and defensive tackle Malik Jackson. Ramsey, Bouye, and Campbell were named starters.

In the 2018 season, the Smyrna native also started all 16 season games. After its finish, Ramsey stated that he was ready to start talking about a long-term contract with the Jaguars. However, the franchise’s heads exercised his $13.7 million fifth-year option for 2020 on February 27, 2019. On September 15 there was a lot of drama on Jacksonville's sideline in their game against Houston Texans.

During the first quarter of the game, Jalen Ramsey got into a spat with Jaguars coach Doug Marrone, a spat that was apparently on the brink of getting ugly before safety Ronnie Harrison came over and pulled Marrone away. The incident happened after the Texans drove down to get their first points of the game, which came after kicker Ka'imi Fairbairn hit a 39-yard field goal with 1:54 left in the first quarter.

As Ramsey was walking off the field, he started yelling at multiple people on the Jaguars sideline, including Marrone. At one point coach walked over to cornerback to try and talk to his star, but things quickly got ugly, and Marrone had to be pulled away by Harrison. Although it was not clear why Ramsey was upset, he might have been mad because the Jags coaching staff didn't let him cover DeAndre Hopkins for part of the drive.

When the game started, Ramsey was covering Hopkins man-to-man, but apparently, the Jags decided to change that game plan during the Texans' scoring drive, a drive where Hopkins had one catch for three yards. Following that loss, Ramsey’s agent requested a trade after the player felt disrespected by the clubs’ organization, revealing that an upsetting conversation with team management was the final push for his decision.

Ramsey played in the Jaguars' win over the Tennessee Titans in Week 3, but he was included in the inactive list very soon. He missed Week 4, but the Jaguars had no plans to trade Ramsey despite his request. However, there appeared several big contenders for star cornerback. The Browns were one of the top five contenders. The Atlanta Falcons, Chiefs, Detroit Lions, and Seahawks were the other top teams vying for the two-time Pro Bowler’s services. There were those, who officially rejected Jalen’s candidacy, for example, Chicago Bears.

Missed Week 4-6, on October 15, Ramsey was traded to the Los Angeles Rams for several top picks in upcoming drafts. Soon Ramsey gave an interview to Ryan Clark and explained the news surrounding him several months before. In a nutshell, he confirmed what most already knew about his issues with the front office, but a few other details were brought to light.

The main change he was referring to was the hiring of executive vice president of football operations, Tom Coughlin, who was named the leader of the Jags’ front office in 2017. Afterward, Ramsey clarified that his saga with the Jags didn’t occur because of his Week 2 incident with the coach, Doug Marrone.

He added that the explosion was simply a result of Marrone not trusting him enough to challenge a dropped pass by DeAndre Hopkins that Ramsey witnessed. Despite all of that, Ramsey insisted that his relationship was good with Marrone and that both of them were over it within a matter of minutes. Jason Smith compared superstar cornerback to the NFL’s Antonio Brown.

In July 2018, Jalen Ramsey and his girlfriend, Breanna Tate, were proud to become parents, and Ramsey announced the birth of his daughter with an epic tweet. He let his fans knew that he would be out of training camp until he would not be “comfortable knowing my family is healthy and happy.”

Their second baby, the couple welcomed in September 2019. Despite all the conflicts, Ramsey was permitted to leave the team to be with his family before and after the birth of his second daughter.

In 2016, Ramsey was signed with Nike's Jumpman brand. But in June 2019, Ramsey repeated his commitment’s change trick and an announcement about his move to Adidas. The player announced his new partnership on Twitter, saying:

"Truly thankful for my three-stripe family."

The promo video showed Ramsey training in Adidas' new Adizero cleats. The new collection was unveiled in January for 2019 All American Bowl.