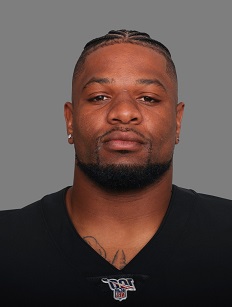 Vontaze Burfict is a successful American football player. He performs for the Oakland Raiders of the National Football League. Vontaze is a talented sportsman who has reached great results in football, although his character is not calm. He has been involved in several disputes and was fined often during his career.

Vontaze Burfict was born in South Los Angeles, USA. His dad a bad reputation: he was imprisoned most of the time because he had problems with cocaine. So Vontaze was close to his mother, who worked as a city transit bus driver. He respects his mom for raising him and his older half-brother alone.

Vontaze got his education at Corona Centennial High School and later went to Arizona State College.

Burfict played for Arizona State on National Signing Day. He joined ASU's 2009 class but he struggled to meet admission standards based on the NCAA eligibility sliding scale. The player decided to catch up on his academic performance and became prepared for the 2010 football season. Rapidly, he has become second in the team.

In 2010, the sportsman had to miss several games because he was given a high number of personal foul penalties. In a game against Stanford, Vontaze grabbed the facemask of Doug Baldwin. After that, he was charged with a personal foul for unsportsmanlike conduct that gave Stanford a first down at the ASU 7. At the end of the 2010 season, the player was named Pacific-10 Defensive MVP. Vontaze was expected to take over Omar Bolden as the leader of the Sun Devils defense in 2011, but he had a rather contradictory junior season. Burfict decided to refuse from his senior year at Arizona State and entered the 2012 NFL Draft year.

The Cincinnati Bengals signed the player to a three-year contract. Vontaze made his debut performing in a game at the Baltimore Ravens.

Later he signed a new contract with the Cincinnati Bengals. He demonstrated amazing skills in football during the game against the Carolina Panthers. However, he was fined for the ankle-twisting incident with Greg Olsen and Cam Newton, after which Vontaze had surgery on his knee. He was placed in the physically unable to play list.

The player performed well during the 2015 season but Burfict committed a critical penalty for unnecessary roughness in the fourth quarter when the Bengals were leading Pittsburgh 16–15. His penalty was for a hit he made with his shoulder to the head of wide receiver Antonio Brown.

In 2016, the Bengals defeated the Philadelphia Eagles. But Vontaze again was suspended by the NFL for violations of player rules during games in 2016.

In 2017, the player had a new three-year contract with the Cincinnati Bengals. In October, he got a fine for kicking the player Roosevelt Nix. The same year Vontaze was suspended for the first five games of the 2017 regular season due to a blindside block he made on Chiefs’ fullback Anthony Sherman during the second preseason game. The player appealed his suspension to reduce it to three games.

Vontaze was released by the team after seven seasons in March, 2019. He signed a one-year contract with the Oakland Raiders and showed perfect playing during the game against the Denver Broncos. But the player again couldn't resist his hot-tempered character. Firstly, he threw a few punches at the end of a Dalvin Cook run in a 34-14 loss to the Vikings. And later, he was disqualified in a game against Indianapolis Colts for hitting the helmet on Jack Doyle. The NFL made the decision to suspend Vontaze for the rest of the season. Many players didn't care much about Burfict's behavior. In fact, some felt that he deserved it, including New England Patriots tight end Ben Watson. Watson took to Twitter to express how he felt about Burfict's suspension with irony, he wrote: “Better late than never.” Undoubtedly, such unleashed behavior on the field should not go unpunished.

Vontaze is described as an energetic and intense player. He is very speedy during the matches. He also has the ability to focus very fast. The only problem of the talented player – is his impulsive character.

The net worth of the player equals to $12 million. He gets his salary from his football career.

Speaking about the private life of the player, he is dating Brandie LaBomme. They met each other in high school. Brandie worked as a tutor; then she got qualification and became a leasing agent. Brandie is active on a number of social media platforms including, Twitter, Instagram and Facebook. She is not his wife yet, but the couple has two daughters: first girl was born in 2015 and a second daughter arrived in May, 2017. According to the latest news, the family is going to make their relationship official soon.