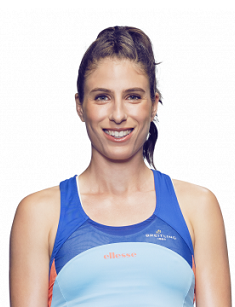 She is a professional sportsman who gained worldwide recognition and fame. Through her career, she won numerous titles. Her amount of prize money contains more than $8 million. She stays from any controversy keeping honest and straight life both on the court and in life. However, the player had some difficulties concerning coaching. She changed coach after coach and sometimes was criticized by the experts. Nevertheless, overcoming all obstacles, the player stays one of the most productive players in the world.

She was born into a middle-class family. Her father worked as a hotel manager, and her mother was a dentist. They are both Hungarian emigrants who moved to Australia and met here. The girl had a grandfather who played for the football team and brought to it a victory in the most prestigious caps. Later he worked as a coach. That’s why as a child she had good heredity and since childhood displayed interest in sports activities. She has an athletic body type.

Having spent all her childhood on the northern beach of Sydney, she got the opportunity to go in for tennis only when she was eight. In 1999 she was introduced to tennis at the after-school course, later she also attended the academy in Spain for 15 months. By this time, her parents moved to England and became citizens of the UK. Unfortunately, there is little information about her educational background.

In 2008 her professional career brightly started when she didn’t keep the audience waiting and won several titles. However, her worldwide popularity was steadily growing. In 2016 she managed to gain more recognition after she reached the semifinal in the tournament in Australia. This year she also overheld the impressive win over the experienced American opponent.

Since the 2000s the tennis player has got three passports, British, Australian and Hungarian. In 2012 she began playing for Britain, and this news turned out to be very beneficial for the UK as she became an absolute star. In 2016 she was honored to represent her country at the Olympic games, and in one interview, she said that it is her best memory. In 2017 she won the biggest trophy in her career in Miami. This title allowed her to become the sevenths best player in the world. The tennis player has a big ambition to become number one, but she has to struggle with such giants as Serena Williams.

Though many experts criticized her for lack of strategical thinking, lack of “plan B” and variety, it doesn’t mess her to become Top-7 players. Her style is more offensive and faster. She also never stays in one place and tries to make better her skills and vision of the game. Her career earnings is more than $8 million.

In her early period, she trained in Spain and the USA. When her parents moved to England, the athlete began working with a coach in England. Later the academy was closed and became the base for elite players. That’s why she started working with the Spanish coach.

She also worked with the mental coach, trying to develop the strategical thinking. His mental coach died in 2016, but the tennis player didn’t stop taking benefit from her mental work. She said that this coach made much for her and always continued maintaining.

In 2016 she changed coaches again recruiting Belgian coach and the new partner. But her training didn’t bring a benefit, that’s why she had to look for the coach back. But in the following years, she continued to change coach after coach. Finally, she found Dimitri Zavialoff in 2018 and continues working with him.

The tennis player hasn’t been married but stays in relationships with her long-term boyfriend. Probably the couple soon may decide to tie the knot, as the athlete has already built one of the most successful careers and gathered a good fortune. Her net worth is estimated at $4 million.

Besides her sports career, she takes benefits from her fame and recognition. Thus, she collaborates with various brands. These endorsements also allow her not to have money on her mind.

Besides her hard work and iron nerves, she stays an ordinary person who likes eating ice-cream and attending concerts of Taylor Swift. The tennis player hasn’t been involved in any scandals. She does best in her job and seems to be a straight person. As to social networks, she has accounts in the most popular platforms. Thus, the player has more than 100,000 subscribers in Instagram.