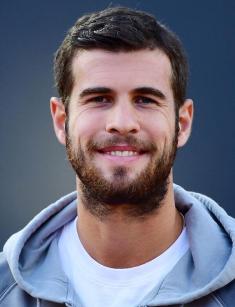 Karen was born on May 21, 1996 in Moscow, Russia in the family of the Armenian father Abgar and Russian mother Nataliya. Karen has a brother and a sister. Khachanov began playing tennis at the age of five and was trained by his father, who is also a former tennis player. Growing up, Khachanov developed a love for the sport and began competing in local tournaments. He quickly proved to be a talented player and began to make a name for himself in the junior ranks. He attended a specialized sports school and later moved to the Russian Tennis Federation’s high-performance training center, where he honed his skills and prepared for a professional career.

Khachanov made his professional debut in 2013, and in 2014 he won his first ATP Challenger Tour title. In 2015, he reached the third round of the French Open, becoming the youngest Russian to reach the third round of a Grand Slam tournament since Andrey Chesnokov in 1984. In 2016, he reached the quarterfinals of the Kremlin Cup, becoming the youngest player to reach the quarterfinals of an ATP World Tour event in Russia since Marat Safin in 1999.

Khachanov's breakthrough came in 2018, when he won the Kremlin Cup in Moscow, becoming the first Russian to win the tournament since Nikolay Davydenko in 2009. He also reached a career-high ranking of No. 11 in the world, and qualified for the Nitto ATP Finals for the first time in his career.

In 2019, Khachanov reached his first Grand Slam quarterfinal at the French Open, and reached a career-high ranking of No. 8 in the world. He also reached the semifinals of the ATP Tour Finals, and became the first Russian player to reach the semifinals since Marat Safin in 2000.

Khachanov has a powerful serve and a strong baseline game, and is known for his aggressive style of play. He has also been praised for his ability to play well on different surfaces, including clay and hard courts.

Off the court, Khachanov is known for his humility and dedication to his craft. He is also a philanthropist and is involved in various charitable organizations.

In 2020, Khachanov had a good run on the tour, reaching the round of 16 at the US Open and the quarterfinals of the ATP 500 tournament in Acapulco. He finished the year with a win-loss record of 23-15.

Khachanov's career highlights include winning the Kremlin Cup in 2018 and reaching the semifinals of the ATP Finals in 2019. He has also reached the quarterfinals of the French Open and the US Open and the final of the Paris Masters. He is currently ranked in the top 20 in the world and is considered one of the rising stars of the men's game.

Karen Khachanov is a private person and there is not much information available about his personal life. However, it is known that he is married to his long-time girlfriend. The couple has been together for many years and they have a son together. The name of his wife and other details about their relationship are not publicly disclosed. It is known that he often posts pictures of his family on social media, and is seen traveling with them during the off-season. He is also known to be close to his family, particularly his father who is also his coach. He has a good balance between his professional and personal life. Despite his busy schedule, he always makes time for his family and friends.

Here is a list of Karen Khachanov's most notable honors and awards in his tennis career: