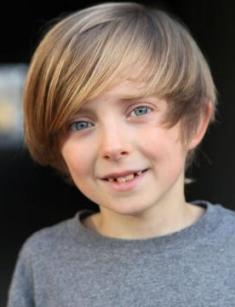 Aiden Longworth is one of the most promising child actors in North America: he has appeared in more than a dozen projects popular on IMDb, including the tragicomedy Hector and the Search for Happiness and the thriller The 9th Life of Louis Drax.

The future actor was born in Vancouver, Canada. He showed artistry early, so the parents took their son to a theater studio. It was the right choice: movie scouts discovered the young talent there.

Aiden has an elder brother, Rowan, and a younger sister, Hannah. The siblings have good acting abilities as well; each of them has participated in five projects. However, the middle child is proving to be a leader among them now.

Aiden Longworth was eight years old when he debuted on the screen. Initially, the boy was given episodic parts in the famous series: The X-Files, Supernatural, The Tomorrow People. Further on, the actor appeared in the thriller Cut Bank, the family adventure Hector and the Search for Happiness, the fantastic series DC's Legends of Tomorrow, and the horror The Unseen.

2016 brought the artist much fame: he played the main character in the thrilling detective The 9th Life of Louis Drax. Besides, the boy enjoyed pretty much screen time in the grotesque comedy Dirk Gently’s Holistic Detective Agency and the fantastic action Timeless. Aiden’s sister and brother also appeared in many of these projects.

Today, the teenager is not interested in relationships, even though he has a lot of fans. Longworth is focusing on his acting career and school studies; he does not seem to be dating anyone.

The artist likes to listen to music, read books, and view modern pictures. Writing is his primary hobby – Aiden creates short stories and hopes to write an exciting novel one day.

The Longworth family is friendly and supportive. Although the boy has to leave his house from time to time, he loves to spend evenings with his nearest and dearest. Just like many teenagers, Aiden is not fond of large feasts; he prefers vegetables and fruits, especially apples and tomatoes.