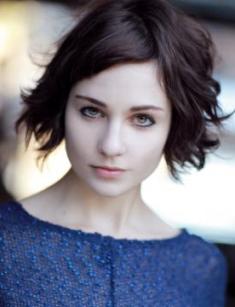 Tuppence Middleton is a British actress famous for her roles in Tormented, Sense8, and War & Peace.

The would-be star was born in Bristol into the family of Nigel and Tina Middleton and grew up in Clevedon, Somerset. The girl was not the only child in the family: she had the elder sister, Angel, and a younger brother, Josh. The parents named their daughter “Tuppence” after the mother’s nickname in her childhood.

Little Tuppence tried many activities: dancing, singing, karate. One day, she saw a documentary on TV: small kids were auditioning for some role. This is when the burning desire to be one of them appeared.

March 2013 was marked with the first theater appearance in The Living Room; by that moment, the artist was known as a beginner in cinematography.

The actress started her career in 2008; one could see her in the short movie Dance Lessons. Other projects followed soon: the series Inspector Lewis and two episodes of the detective medical drama Bones.

The next year, Tuppence was invited to the youth thriller Tormented; it brought her some recognition. It is a story about a school student who cannot face his classmates’ bullying and commits suicide; however, the young man takes revenge on his offenders after his death. In 2010, fans could enjoy their favorite’s work in the fantastic comedy Skeletons about a company that deleted all evidence about its clients’ crimes – and their memories about it, too.

Little by little, the young talent’s filmography was expanding: the psychological thriller Chatroom, the biopic First Light, and the detective series New Tricks. Critics appreciated her diligence and nominated her for the London Evening Standard Film Awards for Most Promising Newcomer in 2010.

In 2011, the audience welcomed the comedy Friday Night Dinner about weekly family meetings of two adult brothers and their parents, the medical drama Sirens, and the thriller Black Mirror set in a parallel universe. However, the crime drama Trap for Cinderella turned out to be the most significant project of this period. The actress personified the main character who is severely injured during a fire; day by day, she is restoring her memories about her life.

The 2012 crime movie Clearskin is also worth noticing. Middleton was given a secondary character, Kate, and collaborated with Sean Bean, who played the fighter against terrorism Ewan.

In 2013, Danny Boyle’s thriller Trance was premiered; one could see the auctioneer taken hostage. Middleton collaborated with James McAvoy, Vincent Cassel, and Rosario Dawson. The cast of the Hollywood comedy The Love Punch was no less splendid: Pierce Brosnan and Emma Thompson personified two spouses married for a long time. As the main characters’ savings are stolen, they have to deal with the problem on their own. Tuppence played their daughter, Sophie.

In the action Sinbad, the actress gained the bright role of Tiger.

The 2014 military drama The Imitation Game arose pretty much interest among movie lovers; it is the story about a top English scientist who breaks the fascist Enigma code. Once again, Middleton was surrounded by the Oscar-winning actors: Benedict Cumberbatch and Keira Knightley. The project grossed $230 million worldwide.

In 2015, Tuppence participated in the fantastic action Jupiter Ascending about a woman with superpowers; the actress’s character was Kalique Abrasax. Further on, the mystic series Sense8 was presented; many viewers were looking forward to new episodes. The artist played one of the eight people who suddenly felt the unusual connection with each other.

The actress identifies herself as a shy, introverted person; as a child, she would gladly lock herself in a room and enjoy her solitude. It was a surprise for her when she was accepted to the theater with such a character.

Tuppence communicates with her friends and fans on her personal Instagram page, but new pictures and comments appear more frequently on Twitter.

Both journalists and fans ask the artist if she is related to Kate Middleton, Duchess of Cambridge and the wife of Prince William. According to Tuppence, they are only namesakes.

Fisherman’s Friends, Clifton Hill, and Downton Abbey (where she played Lucy Smith) are the artist’s most recent projects.

Tuppence Middleton’s net worth is about $3 million in 2019.