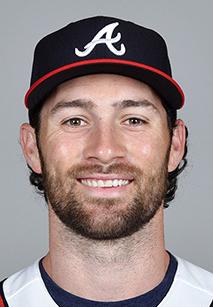 The Georgia native Charles Culberson, who was drafted as a supplemental first-round pick by San Francisco Giants back in 2007, started a baseball career in MLB only in 2012. He plays at an infielder/outfielder position. Over the years Charlie was playing for Giants, Rockies, and Dodgers and joined Atlanta Braves in 2018. Garrett’s net worth is roughly estimated at $5 million, including all of his properties and earnings. He has been married to Sarah Culberson since 2011 and has three children from his wife.

The birthplace of Culberson was Rome, Georgia. He was born to his dad, Charles, and mom, Kim, on April 10, 1989. Charles became the second child in a family, apart from his elder sister. Charles’ father played five years professionally with the Giants and Royals. The little boy grew up, looking for his dad and wanted to be like his dad and play in the big leagues. After the retirement Charles’ father opened the facility in Rome and began teaching children.

Charles studied at the Calhoun High School, playing for its football team. He didn’t go to football games or dances and didn’t have steady girlfriends because he was pursuing his dream. Charlie was forced to miss out on a lot of things. In the summer of 1999, the Rome News-Tribune ran a story about a local kid who was playing for a handful of youth-league baseball teams at the same time. The kid, of course, was Charlie Culberson.

The story was accompanied by a photo of him lying on his bed, surrounded by his various jerseys. After he outgrew all of those uniforms, he continuously replaced them with new ones, collecting a small mountain of baseball attire throughout his childhood and teen years. In 2005 Calhoun won the Georgia baseball tournament.

In 2007 Culberson went on MLB Draft, abstaining from college. He was drafted as a supplemental first-round pick by San Francisco Giants. However, young prospect joined AZL Giants in Arizona league. On Rookie level, Culberson spent 46 games and scored 16 runs batted in (RBI), one home run (HR) and .286 batting average (BA). Before Culberson was promoted to the major league in 2012, he managed to change seven various teams in leagues of different levels.

Culberson made his major league debut with the San Francisco Giants on May 13, 2012. Playing second base and batting seventh in the lineup, the Rome-native went 1-for-4 during the Giants’ 7-3 victory. By making it to the majors, he completed a mission that he seemingly started the day he was born. Culberson has seen action in five games for the Giants. Like many rookies, he had struggled in his first few games, batting .111.

Trip to Rockies and Dodgers

Appeared in six games with the Giants in 2012, hitting .136 with one RBI, Culberson was traded to Colorado Rockies with cash considerations for Marco Scutaro on July 27, 2012. He didn’t enter the main Rockies’ roster and joined its affiliate in AAA League. In 2013, Culberson, several times was promoted to MLB, scoring his first home runs for Colorado. All in all, the player appeared in 47 MLB games and 97 minor league games in 2013. In 47 games for major Rockies team, he hit .293/.317/.404 with two HR and 12 RBI.

On March 3, 2014, Charles signed a one-year $500,000 contract with Colorado. That season became his first full MLB season. After 95 games, he resigned to franchise for a new year but got injured in 2015 summer camp. In November 2015, he signed a minor league contract with the Los Angeles Dodgers. Gone through the spring camp, Culberson entered the Dodgers’ Open day roster. He continued the Rockies’ story transferring between MLB and AAA League.

In 2016 season, Culberson played 34 major league games and 70 AAA games, scoring seven RBI, one HR with .136 BA. He made his only home run in the last Dodgers game of 2016 season. On September 25, 2016, Charlie hit a solo home run in the bottom of the 10th inning to give the Dodgers the National League West championship with a 4-3 win over Culberson’s former team, Colorado Rockies. He reached that in front of 51,962 at Dodger Stadium.

The game not only marked the end of the Dodgers’ regular-season home schedule. It also culminated a weekend of festivities honoring Vin Scully, the Hall-of-Fame broadcaster who called his final game at Dodger Stadium. Scully said he would not broadcast any of the team’s postseason games.

December 16, 2017, became a special day in the Charlie’s life. The Rome-born infielder found out from his agent that he would be going to the Atlanta Braves, the team he grew up rooting for.

“It’s a major highlight for me,” Culberson said. “I grew up dreaming of playing for the Braves. It feels great being part of this organization.”

He joined the Braves in the surprise salary-dumping trade that sent Matt Kemp to the Dodgers in exchange for Culberson and several of his teammates. Culberson joined Dansby Swanson in Atlanta, a shortstop with whom they had a lot in common. They were both former first-round Draft picks, they're both Georgia natives, they're both infielders and they even both look alike. Their appearances were so similar that Culberson said that he'd been mistaken for Swanson at least 20 times already during spring camp.

Soon it was announced Culberson, the second time in his career, had made an opening day roster. He got the most out of his opportunity, entering debut game as a defensive replacement at third in the ninth inning. He then led off the bottom half with a single and was one of the two runners on base for Nick Markakis’ game-winning home run.

Showed the best career stats in 2018, Culberson signed a one-year $1.395 million contract with Atlanta, avoiding arbitration in January 2019. Spent 108 games, with 20 RBI, 5 HR, and .259 BA, on September 14, 2019, the player got injured. He was hit in the face with a pitch during the seventh inning of a 10-1 win over the Washington Nationals at Nationals Park. He was struck directly on the right cheekbone by a 91 mph fastball by reliever Fernando Rodney.

The utility player, who was pinch-hitting for starting pitcher Mike Foltynewicz, immediately fell to the ground as Braves medical personnel rushed out to assist him. The video showed the blood dripped from his face before he was helped to his feet with a towel pressed to his face and taken off the field on the back of a cart on his way to the Washington hospital.

The next day, Braves manager Brian Snitker held back tears as he attempted to update the status of Charlie Culberson, announcing his injury status. Snitker said Culberson suffered multiple facial fractures, but looked much better than expected when he returned to the hotel the night before, according to ESPN. Several days later, the Braves recalled catcher John Ryan Murphy from Triple-A Gwinnett and placed Culberson on the 60-day injured list.

On November 5, 2011, Charlie Culberson and Elizabeth O’Rourke tied the knot at St. James United Methodist Church in Augusta. After the couple said their “I do’s,” they celebrated with family and friends at Old Medical College. Sarah and Charlie became parents in a year after their wedding.

They welcomed their first daughter, Collins, in 2012. Three years later, Sarah gave birth to their son, Ace. In 2016, the spouses became parents of three, welcoming their daughter Everly Louise. They announced that on Twitter.