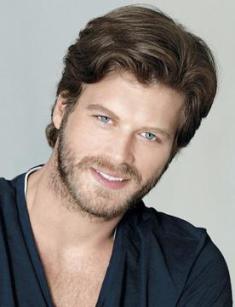 Kıvanç Tatlıtuğ is a Turkish actor and model, the star of the TV series Aşk-ı Memnu, Menekşe ile Halil, and Kurt Seyit ve Şura. Kıvanç has also repeatedly participated in local and international pageants. Fans and journalists call the actor "Turkish Brad Pitt" for his charisma and handsome appearance.

The future actor was born in the city of Alan in the large family of Erdem Tatlıtuğ, a Kosovo Albanian. His father Erdem and mother Nurten followed the family tradition and had their own bakery. There were five children in the family. It is unlikely that Kıvanç could afford to study at a prestigious private college, but his height and a love of basketball helped the young man.

During his school years, the boy professionally learned to play the ball and threw it into the basket. In college, he began to play for the Ülkerspor club, then transferred to the famous Fenerbahçe club. Moving later to another legendary Beşiktaş team, Tatlıtuğ unexpectedly said goodbye to his professional career, when he got a severe knee injury that prevented the young man from pursuing a career in sports.

The young man grudgingly entered Istanbul Kultur University to study design. The mother saw that the son did not feel satisfied with the new field and advised the young man to try his luck in the modeling business. Kıvanç Tatlıtuğ attended courses at a modeling agency and began to walk the runway. In 2001, Kıvanç won the Best Model of Turkey competition, and a year later won the Best Model of the World pageant, which was held in Paris, France.

Despite the apparent success, the man did not plan to develop a modeling career for a long time, since he understood that it could not last long. Kıvanç began to attend acting classes, and a few years later, a new movie star appeared in the country.

The actor played the first role of Muzaffer in the Turkish comedy Americans at the Black Sea. It is interesting that after the release, the movie did not take viewers’ breath away. However, the directors of the melodrama TV series Gümüş noticed it and invited Tatlıtuğ to the project that brought the actor popularity. This role was followed by characters in the comedy Acemi Cadi and the thriller Menekşe ile Halil.

The actor became very famous, playing in the drama Aşk-ı Memnu. After the first season, Kıvanç Tatlıtuğ was awarded the Golden Butterfly Awards. The actor was also involved in the shooting of the crime series Ezel and the drama Kuzey Güney.

It should be mentioned that the actor has always prepared for each role thoroughly. For example, when director Yılmaz Erdoğan offered Kıvanç to play the role of a real young poet, Muzaffer Tayyip Uslu, a patient with tuberculosis, in the biographical drama The Butterfly's Dream (Turkish: Kelebeğin Rüyası), Kyvanch took this task seriously. The actor carefully read and thoroughly studied the work of poets of that time, and he lost 10 kilograms, nearly wearing himself into a state of exhaustion.

The actor is also quite famous and popular abroad. Several foreign channels bought the rights to broadcast Turkish series with the participation of Kıvanç Tatlıtuğ; the projects have also been translated into various languages. In Russia, Kıvanç Tatlıtuğ is best known for one of the latest works, the historical war drama Kurt Seyit ve Şura.

This series was released in 2014. The actor played the leading role, Lieutenant Kurt Seyit Eminof, in this drama. The action takes place in the Crimea, the Russian Empire, on the verge of the Russian Revolution. Kurt Seyit was brought up to be loyal to the ruler and respect the imperial power, and now he is an officer in the Imperial Guard.

At the same time, the TV series is not political, but rather romantic. The main storyline tells about the love of Tatlıtuğ’s hero and the Russian aristocrat, Alexandra (Farah Zeynep Abdullah). During the collapse of the Empire, Kurt Seyit quarrels with his father because of his love for a Russian girl and moves to Istanbul. However, he is caught in a love triangle because a girl, Mürvet (Fahriye Evcen), falls in love with the man.

In 2016, the actor landed the leading role in the melodrama series Cesur ve Güzel. The actor’s hero, a mysterious young man, named Cesur, moves from a large city to a small town. He meets and falls in love with young Sühan (Tuba Büyüküstün). The girl comes from a wealthy family and runs a family business.

However, it soon transpires that the families of the young people have been at feud for a long time. Besides, Kıvanç Tatlıtuğ’s hero also has secrets in his past and left his native metropolis for a reason.

After the release of this series, fans started talking about the love affair of Kıvanç Tatlıtuğ and Tuba Büyüküstün because the romantic relationship between the characters looked so real on the screen. But both actors have different ties. Kıvanç Tatlıtuğ has his beloved wife, and although Tuba Büyüküstün divorced during the filming and broadcast of the series, she soon appeared with a boyfriend.

There is an interesting fact that Kıvanç Tatlıtuğ’s friends say that the actor is a modest and shy person. But at the same time, the actor has had many love affairs with rather famous women.

In 2004, Kıvanç Tatlıtuğ met and began dating actress Azra Akin, the former Miss World 2002. The lovers were together for four years, after which Kıvanç started a romantic relationship with the TV presenter and actress Meltem Cumbul, who was 14 years older than him. At first, this love affair seemed short-lived. Indeed, after six months Tatlıtuğ left the woman for İdil Fırat, the daughter of a Turkish millionaire, but soon returned to Meltem. Their relationship lasted until 2013, and there were even rumors about the wedding, but in the end, the couple broke up.

In the second half of 2013, the actor began dating Başak Dizer, a stylist and make-up artist at a film studio. The news that the couple was going to get married appeared in early 2015. But the actor’s close friends denied these rumors. However, at the end of February 2016, Kıvanç Tatlıtuğ finally stopped being a bachelor and married his lover.

They did not have a lavish wedding, and the couple invited only 40 relatives and friends. At the same time, the actor’s mother could not even arrive at her son’s wedding due to health problems; the woman watched the broadcast of the event online.

There is an account titled Kıvanç Tatlıtuğ on Instagram. This page has not been verified, and the photos that appear on Instagram include posters and professional photoshoots. So, there are very few everyday pictures of the actor.

Nowadays, the actor continues to film regularly. The recent prominent work of Kıvanç Tatlıtuğ is the role of Benjamin in the historical movie Edict of Expulsion 1492, which was released in 2017 and produced by Turkey. This project became the third full-length film in the actor’s filmography, which mainly consists of TV series.