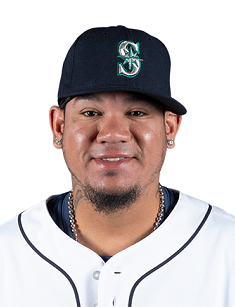 Felix Hernandez or “King Felix” by nickname - is a popular Venezuelan-American professional baseball pitcher with a high number of career wins. He performs for the Seattle Mariners of Major League Baseball. The player made his MLB debut in 2005.

Felix Hernandez was born in Valencia, Venezuela. His father owned a small trucking company. Everyone in the family worked hard to make the business a success. Felix inherited his dad’s baseball talent and love of hard work. His family and relatives call him by his middle name, Abraham. He has an older brother, Moises, who is also a sportsman. He played minor league baseball in various organizations.

Felix was first was spotted at age 14 by Luis Fuenmayor. Fuenmayor saw him playing and recommended him to fellow scouts Pedro Avila and Emilio Carrasquel. When the a teenager turned 16, The Seattle Mariners took him in the team.

After graduating from high school, Felix signed his first professional contract in 2002. He had many offers from other teams. But the player decided to play for the Mariners. He had his own reason for this: his idol, fellow Venezuelan pitcher Freddy García, was pitching for the team at the time. His agent, Wil Polidor, also supported the decision as well as the father of the player. The family of the novice athlete trusted the team.

At the beginning of 2005, Baseball America listed him as the No. 1 pitching prospect in baseball.

The athlete has had several injuries throughout his career. Soon after returning from his first injury, the player was called up to the major leagues by the Mariners. He made his debut in a game against the Detroit Tigers. For his first full year in the major leagues, the sportsman was out of shape, but he recovered from injury in time to begin the season in the starting rotation.

During the offseason, Felix decided to come back to his parents' home. He rested with his girlfriend and daughter. The player had a special diet, daily running, and regular weight training. He was advised to lose about 20 pounds. He returned in much better physical condition to the United States in January, when he began a throwing program in advance of spring training.

In the 2007 season, Felix won the honor of being named the team's Opening Day starter. Due to increasing tightness in his right elbow, the sportsman was told to miss some games, as he was placed on the disabled list. Upon his return, the player initially battled to regain the form he had flashed in those first two starts of the year. He again threw the fastest fastball of all major league starters in 2007.

Among the main highlights of the 2009 season, there was a game against the Padres. It was first complete game of the season and one of the best starts of Felix's career. In July, 2009, he was selected as the Mariners representatives in the 2009 MLB All-Star Game.

In January, 2010, Felix had a new contract with the Seattle Mariners, worth about $78 million. He had some failures during the year, but he had won the 2010 American League Cy Young Award on the strength of all of his other stats, leading the league in ERA. He was also named the Sporting News AL Pitcher of the Year.

In February, 2013, the player signed a seven-year extension, including a team option for 2020. The contract made him the highest-paid pitcher in Major League history.

In the 2015 season, the baseball player was selected as an All-Star along with teammate Nelson Cruz by Ned Yost. According to Felix, this season was not without its struggles. He finished the season with the worst ERA for him ever since the 2008 season.

In the 2016 season, Felix started to improve his scores. He earned his 150th career win, defeating Mike Trout and the Angels by a score of 3-2.

Felix suffered another injury in 2017, and was put on the 10-day disabled list. After spending two months out of games, he was activated, winning a game against the Houston Astros and striking out battering score: eight. Later, the sportsman was placed on the disabled list again, due to right biceps tendinitis.

In 2018, Felix had the worst season in his career. He had low scores and got several injuries.

There was a curious moment in 2018, that rapidly spread in media: when Felix during the game struck out Adrian Beltre, Dominican former professional baseball third baseman, and laughed at his expense. Hernandez and Beltre know each other pretty well. They were Mariners teammates for the first five years of Hernandez's career from 2005-2009. After Beltre spent one year with the Red Sox in 2010, they have been division rivals ever since. It's no surprise that the two engage in some playful banter when they see each other.

Hernández began the 2019 season against the Los Angeles Angels. In May, after the game against the Boston Red Sox, he has become the sixth-youngest pitcher in Major League history to reach the 2,500 strikeout mark. However, he was placed on the 10-day injured list after the start. In September, 2019, the player pitched in what could be the final game of his career in a 3-1 loss to the Oakland Athletics.

There were rumors lately: if the player would retire or not. Felix commented this, saying that he is not retiring. He knows himself that his physical conditioning became worse before the beginning of the 2015 season. His usual routine during spring training became ineffective. After his first 11 seasons, Hernández looked like a sure-fire Hall of Famer, but now it's in doubt.

Speaking about the style of the player, he has been known to throw a sinker, a slider, a changeup, and a curveball. When the sportsman is in his best shape, he can induce a steady procession of groundball outs and strikeouts, with very few balls being hit in the air.

An interesting fact: the sportsman wears a long-sleeved undershirt beneath his uniform jersey and he wears it even in the hottest weather. He does it because it helps to keep sweat from running down his arms.

Felix is a married man: he and his wife have two children: a son and a daughter. It is known, that the family resides in Clyde Hill.

The sportsman is a dog lover; there are two dogs in the family: King and Oreo.

The sportsman is engaged in charity work. He is the Seattle Mariners Ambassador for the Pepsi Refresh Project, raising money for the Washington State Coalition Against Domestic Violence.

In September 2018, Hernández became naturalized as a United States citizen.

Some people confuse the player with the actor and producer from Los Angeles who has the same name as the sportsman: Felix Hernandez.

The net worth of the player is estimated at $90 million. His earnings come predominantly from his professional career. He also stars in endorsements. He presented Nike for the last couple of years. Speaking about the gear of the sportsman, he has mesh on his glove. An interesting fact is that he has a half mesh design: mesh on the back, but not on the thumb or wrist.