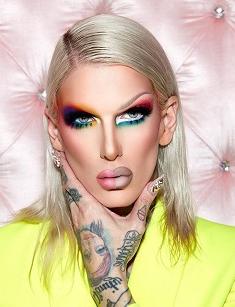 He is a blogger with a multitalented nature, which allowed him to try himself in different fields and increase his success. He became a social and media phenomenon, as a bright, eccentric, and skilled personality. Having occurred in the right place at the right time, the makeup artist made a rise to stardom and gathered a considerable fortune.

In his childhood, he displayed interest in makeup and glamour. As a fact, it became both the most thrilling interest for him and the primary sense. The blogger is 33 years old. Possibly, his mother, who worked as a model, had a significant influence upon him.

Unfortunately, the boy early has met hardships. His father died as a result of suicide when he was six. The boy experimented with his mother’s cosmetics all the time. It is not a big surprise that after graduation, he had chosen make-up as his profession.

His music career had simultaneous and abrupt character. Thus, he decided to make music when his friend supported and encouraged him. His vivid appearance and gender-bending conduct attracted to him much attention. He was invited to take part in the events of Three Colours Flag. The singer participated in the tours at the beginning of his career around USA and Canada.

He released the album in 2009. For expanding his popularity, the singer launched several promotion tours around the world. Some people described him as the following Lady Gaga. But in 2013, the singer unexpectedly finished his career as a singer. He didn’t clear reasons.

In 2013 he launched her first company, he widely promoted his cosmetics through the channel on YouTube. In 2018 he was called one of the highest-paid bloggers. He made earnings of $18 million.

After graduating the high school, he decided to move to LA and pursue the career of the makeup artist. As the artist mentioned, those times he tried to attend the Hollywood clubs making the fake ID. He dressed mini-dresses and high-heels to attract attention and obtain valuable contacts with celebrities. This way, he tried to find wealthy clients.

Besides, he used social networks to expand his popularity both as a singer and a makeup artist. He shared his views and event, telling people about his experience of self-image and confidence. Even though he managed to build a fan base on several websites, he focused on My Space and committed fans to follow him there. Here he became a star in the very beginning. His pictures got over 50,000 comments.

In recent years he collaborated with Shane Dawson and releasing two documentaries. These movies were created as attempts of trying to understand Jeffree’s personality.

He gained wide popularity for her gender-bending persona. He made much confusion about his gender due to his extraordinary appearance. He likes wearing long hair and pink-colored clothes. As a star who never stays people indifferent, she had several feuds in the media, among them Kat Von D and Laura Lee. Once, he was accused of racism. His net worth is $40 million.