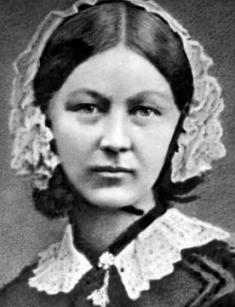 The British noblewoman Florence Nightingale is known as a social reformer, statistician, and founder of modern nursing. Her choice of a job was not typical for the higher circles. Nightingale became a prominent figure during the Crimean War and organized nursing care for wounded soldiers.

Florence founded the first school of nursing in London and helped improve medical care for all layers of British society. The woman is famous for her simple, accessible instructions on how to administer first aid; she collected social statistics and information about patients, which was broadly used to analyze the situation in the country.

Florence Nightingale was born on May 12, 1829, in Florence; she was named after this old, beautiful city. The family belonged to the upper circles of the noble society; the parents had enough money and frequently traveled all over the world. Little Florence, her three brothers, and a sister spent their childhood in hotels in many regions.

However, the kids received a proper education; both boys and girls learned Latin, ancient Greek, German, and French. The father paid much attention to reading and writing and taught his children mathematics. As a result, Nightingale stood out among her peers, who were thinking about a luxurious house and a lucky marriage.

The young woman entered the Parisian high society in the late 1830s; she met many noble men. The parents tried to secure their daughter’s future and could hardly imagine that balls and dinners did not interest her at all. The friendship with an eccentric and open-minded English woman, Mary Clarke, was the only reason Florence attended such events. Clarke was older and despised prudery; she preferred to communicate with intellectual men. She liked Florence, though: her acquisitive mind and strong character were notable. Nightingale absorbed the revolutionary idea of the equality of sexes, just like Mary.

The friendship made a strong impact on the free-willed lady; she decided to serve people and get hired as a sister in a hospital for the poor. It was an immoral job: either alcohol addicts or prostitutes did it, and the parents prohibited their daughter from doing anything like that. Florence obeyed at first but then rebelled; the prescribed roles of a wife and mother madу made sick. In 1844, she informed the family about her decision to get this job by all means.

Despite their discontent and social stereotypes, the young woman was working hard and learned how to take care of patients; she visited Italy, Greece, and Egypt. According to Florence’s diary, she could hear God encourage her to give up the reputation for the good.

Nightingale was a religious person; she listened to the voice from heaven and joined a German pastor in a Lutheran community; he treated low-income patients. It was a life-turning experience for the woman, as well as the church institute in Kaiserswerth; she shared her emotions and thoughts about it in an anonymous book published in 1851.

By 1853, the relatives accepted Florence’s life philosophy and allowed her to become a superintendent at the Institute for the Care of Sick Gentlewomen. She did not take any money for her work – the father provided her with stable financial support; it was possible to live a comfortable life and perform duties as well.

In fall 1854, during the Crimean War, the news about terrible conditions in front-line hospitals came to Great Britain. Nightingale, 38 nurse volunteers, and 15 nuns went to the Ottoman Empire by sea. Following a long journey, they settled in barracks in Uskudar. The personnel were indifferent and slow; they could not provide the wounded with proper care. More than that, the shortage of meds, dressing supplies, and equipment caused infection spread; the number of deaths was growing.

Although nurses could not improve the situation immediately, simple hygienic rules helped reduce the number of the dying from 42 to 2%. Florence addressed the British government via Times, and a sanitary commission created suitable conditions for patients six months later: drain pits were cleared, and air conditioning was enhanced.

Not all offspring appreciated Nightingale’s achievements; some of them criticized her activities. In 2001 and 2008, the BBC presented documentaries that downplayed the significance of her work. However, their creators could not but mention the fact that Florence, nicknamed The Lady with the Lamp, would often make rounds in a hospital at night, when all medics had gone to bed.

Another remarkable fact about Florence is that she collected statistical data about hospital patients and systematically registered the cases of death and recoveries. Soon, the same approach was implemented at St. Thomas’ Hospital, where the woman founded the first school of professional nurses on charity money.

The school graduates got their jobs in leading hospitals of Great Britain, Canada, Japan, and the United States; they also passed the knowledge to their less qualified colleagues.

In 1883, Florence was awarded the Royal Red Cross and became Lady of Grace of the Order of St. John. She was the first woman to get the Order of Merit organized by King Edward VII in 1902.

Young Nightingale often wrote down her own observations and the words of the people she met during her trips; she sent long letters to her elder sister and described what she had learned. These papers were anonymously published in London and became the woman’s first literature try – she decided to combine her nurse activities and opinion journalism.

In the late 1850s, when the Crimean War finished, Nightingale continued to work as a supervisor and created the book Notes on Nursing based on her educational program for nurses. The book proved to be popular and turned into the manual for home patient care.

Apart from educational materials, the text described the measures to prevent diseases and infection spread. Hundreds of readers bought the book; it became an essential part of nursing development in the world. Florence’s statistic research was no less valuable – the data was mathematically organized.

Nightingale’s bibliography also includes religious books; they helped people find the truth and understand themselves. In 1860, she published a part of the three-volume work on God, church, and their place in a person’s life.

Judging by portraits and photos, young Florence was attractive, slim, and gracious. Although her behavior was called severe sometimes, most people believed she was a charming, educated, and well-bred person.

Men often tried to win the beauty’s attention; the politician and poet Richard Monckton Milnes was the most active among them. Nightingale met him sometimes, and they would have small talks. Nine years of courtship ended: the woman rejected Milnes because family responsibilities, a husband, and children could interfere with her noble destiny.

Florence had romantic feelings for her patients sometimes; there was no strict borderline between work and personal matters for her. Later, this psychological phenomenon was named after the famous nurse: the Florence Nightingale effect.

In her senior years, Nightingale’s health was weakened because of brucellosis. However, the woman ignored the symptoms, such as depression and partial immobility, and headed the school of nurses; she did not stop writing scientific and journalistic texts as well.

In the early 1900s, Florence’s efficiency decreased: blind and demented, she would stay in the bed and sometimes asked how things were going.

The social activist was 90 years old. She died on August 13, 1910, in her own house. Relatives did not have the cause of death revealed and buried her in St Margaret’s Church cemetery, Hampshire.

Two years after Nightingale’s death, the International Committee of the Red Cross instituted the Florence Nightingale Medal; her birthday is the international holiday of nurses.

In 1913, Francis William Sargant’s monument to Nightingale was erected at the Basilica of Santa Croce, Florence; the statue was made of Carrara marble. Later, other monuments to the nurse appeared in London squares and streets.

There is a museum in St. Thomas’ Hospital, too: visitors can learn the life and work of the courageous woman. The Crimean period is illustrated in the exhibition at the Selimiye Barracks in Istanbul.