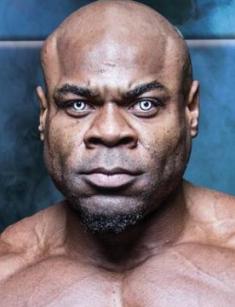 Kai Greene is one of the brightest and most charismatic American bodybuilders. He became famous as an artist, sculptor, and actor. The athlete turned his performances at the competitions into spectacular shows using the flexibility of his body. The appearance of the bodybuilder in public is shocking and unforgettable. Fans nicknamed Kai The Predator. Greene is a man of striking and impressive appearance. The athlete is 5.67 ft. (173 cm) tall and has 22-inch (56 cm) biceps. Kai's weight depends on the competition, ranging from 255.73 lbs. (116 kg) to 299.82 lbs. (136 kg).

The bodybuilder does not like to talk about his life. Kai was born in 1975 in Brooklyn. The boy’s childhood was difficult. The athlete was born into a dysfunctional family.

When Greene was six years old, his parents sent their son to a residential treatment center. Due to the difficult character, Kai could not get along in any foster family. In his youth, he had a brush with the law because Greene often fought.

Over time, the teenager learned to control aggression and began strength training. Greene’s abilities were noticed by an English teacher who suggested that the boy try his hand at bodybuilding. Kai liked the training, and the teenager quickly built the desired body. At the age of 14, the young athlete already participated in junior competitions. At the age of 18, Greene's weight was 260.14 lbs. (118 kg), and the guy benched press 227 kg (501 pounds).

When Kai came of age, he had already participated in 25 tournaments, became the WNBF World Campion. But the plans of the young bodybuilder went further because Greene wanted to gain recognition in bodybuilding.

So, the guy needed to move into the IFBB, competing in the NPC. The athlete conducted intensive training in the gym on Fifth Avenue. Legendary bodybuilders who made a successful career trained there.

In 1999, he came to Bratislava to participate in the IFBB World Championships. Greene finished fourth and was disappointed with the results. The bodybuilder took a 5-year career break. In 2004, the guy returned to training, but only in 2007 won the Shawn Ray Colorado Pro/Am Classic tournament. In 2008, he showed a good result at the Arnold Classic competition, where he was ahead of Dexter Jackson and Phil Heath.

An unexpected operation forced the bodybuilder to leave contests for a while. But in 2009, Kai first participated in the Mr. Olympia competition and finished fourth. Later, the athlete improved physical fitness. Greene began showing his spectacular and unforgettable performances in a mask. During these shows, the bodybuilder combined elements of sports and dance, which helped Kai win the Arnold Classic competition in 2016.

The athlete has repeatedly told the press that since childhood, he has been passionate about art. From an early age, Greene wanted to become an artist or sculptor. Bodybuilding helped him make his dream come true, and the athlete built his own ideal body. Later, the bodybuilder began to paint. In 2011, the artist could show his self-portraits at an exhibition.

Kai also worked as an actor. In 2013, the movie Generation Iron was released, in which Greene played himself.

In 2015, he portrayed a male stripper in the comedy College Debts, and in 2016 he played the role of Funshine in the series Stranger Things.

Kai prefers not to reveal the secrets of his private life. In 2008, rumors appeared that the athlete plans to marry bodybuilder Dayana Cadeau.

Numerous photos depicting the couple proved their love affair. But they did not get married. Reporters later noticed Greene with athlete Dana Linn Bailey. But it is not known for sure whether they had a relationship or not.

The actor and bodybuilder leads a modest, secluded life. He rents an apartment in Brooklyn, goes to the gyms by public transport.

In 2019, his Instagram page has only photos of sports achievements, as well as motivational videos. The athlete continues training to achieve his dream and win the Mr. Olympia title.