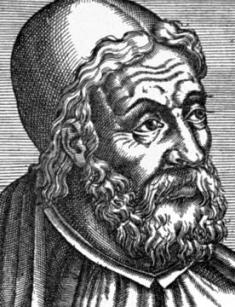 It is hardly possible to overestimate Claudius Ptolemy’s contribution to science: his works on astronomy, physics, mathematics, geography, and even music became fundamental or, at least, gave momentum to their development. A large body of literature about his achievements survived up until today, but biographical details are scarce.

Ptolemy is known for a well-organized guide on ancient astronomy The Almagest, which remained the Bible of astronomy until Nicolaus Copernicus’s theory came to being and originated the modern scientific view on celestial bodies.

Ptolemy’s wide research interests and profound analytical skills made him one of the founders of geography, physics (particularly, optics), the theory of music, and so on. Besides, the man created a theory that celestial bodies moved permanently and functioned as a joint system.

Apart from that, Ptolemy created the teachings about stars’ influence on people’s lives – astrology. He also presented an astronomical atlas with constellations seen in Egypt.

There is little information about the ancient scientist’s life – contemporaries avoided mentioning him in their papers, so the physicist Philip Ball’s books and Claudius’s own texts serve as the only sources today. Ptolemy lived in Alexandria, Egypt. His portrait is patched from ancient sculptors’ works.

The Almagest provides the results of the astronomic observation that give indirect information about the period of the scientist’s life: 127-151 AC. However, when the book was finished, he created at least two encyclopedic books that took about ten years to wrote. According to the philosopher Olympiodorus, Claudius worked in Canopus, Abukir, the suburban area of Alexandria.

Although the second name “Ptolemy” refers to the Egyptian origin, biographical notes mark the Greek roots; the first name “Claudius” has something to do with the Roman ancestry. Thus, it is impossible to identify the man’s ethnicity.

Ptolemy’s scientific research began with The Decree of Canopus – the astronomic data on a stone tower located in Canopus, Alexandria. Although it was destroyed, its information survived thanks to ancient Greek manuscripts.

When the researcher made some corrections, he made Handy Tables – something like an astronomic guide. This information served as the proof that the Earth was motionless, and other celestial objects were moving around it.

Before Claudius finished his famous The Almagest, he worked on many other books, including Planetary Hypotheses. This writing differed from the earlier ones: the parameters describing astronomic objects’ positions were new. Besides, the treatise contained Aristotle’s term “aether” (“quintessence”); it became an integral part of Ptolemy’s theory.

In The Almagest, Ptolemy calculated the distance between the Sun and the Earth and the Moon and the Earth; notably, his results were precise. The researcher used the radius of our planet. At the same time, Planetary Hypotheses gave the distance between the Sun and other planets without their radiuses; Ptolemy concluded that a planet’s minimal radius must be the same as the distance up to the next object of the visible universe. Probably, these works were not created in the same period.

Modern researchers suppose that Risings of the Fixed Stars followed The Almagest. It was the first attempt to forecast the weather judging by the position of celestial bodies and physical phenomena on the surface. More than that, this book systemized the knowledge about climatic zones, geographical belts, and terrestial objects’ disposition.

Ptolemy needed geometrical knowledge about our planet to create his astronomical theories; The Analemma deals with the computation of a radius, arcs, and circles. The work of the sun clock, that had been constructed long before Ptolemy’s research, could be explained by this data. Another manuscript, Planisphere, was about stereographic projection and its application in astronomic calculations.

Quadripartitum is the most ambiguous work by Claudius: it is about the basics of astronomy, or the influence of stars on human life. The eight-volume work Geography is just as popular as The Almagest; it is not only descriptive but also mathematical, with the basic principles of cartography. In the first volume, Ptolemy suggested the starting point from the zero meridian – the Canary Islands.

Today, there are many discussions and arguments on the researcher’s contribution to science: Hipparchus had described celestial bodies’ positions long before Claudius. The poet Omar Khayyam was the first to reveal the information falsification. When Nicolaus Copernicus’s theory came out, Ptolemy’s teachings lost their relevance; only Giordano Bruno continued to develop the idea of geocentrism for a while. However, the system was proven to be false soon.

There is no verified information about the man’s relationships or children; however, he had many assistants and successors who continued his job.

Claudius dedicated his book The Almagest to some Syrus; his identity or relation to the scientist is unknown. The same treatise mentioned the mathematician Theon; still, whether he was Ptolemy’s teacher or colleague is uncertain.

Some sources guesstimate it could be Theon of Smyrna, the philosopher and Plato’s supporter who also studied the sky and created its primitive map. Claudius also had connections with Alexandria library employees – he had access to any book he needed.

The materials from the beginning of our era mention that the researcher was somehow related to the Egyptian Ptolemaic dynasty, but modern scientists believe it is likely to be a mere coincidence.

Just like all biographical facts, the details about the scientist’s death remains unknown. Most researchers agree that he died in 165 AC.

Archive materials report a plague in Africa and Eurasia at that period; perhaps, Ptolemy became one of its victims. However, he lives today in his works; the discovery of many fundamental principles makes him an immortal figure.