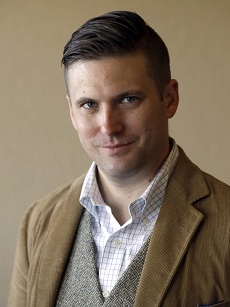 He is an author and publisher known for his extreme beliefs. He stands for the necessity of creating ethnostate with a predominance of white people. He had an excellent education and several degrees. After graduation, the publisher worked in the magazine but soon was fired due to his views. He founded the publishing house and website. Looking for speaking opportunities, he tried to express his opinions and find like-minded people among graduates in universities. However, the universities often rejected him, avoiding problems.

He was born in Boston. His father worked as an ophthalmologist. His mother was from a family who owned the cotton farms. A significant part of his childhood he spent in Texas where he attended school.

His family was wealthy, and Richard had an idyllic childhood. He attended the school in the affluent neighborhood and went to school alongside with daughters of the ex-president. The boy played football and basketball and liked hanging out. Richard has passed all levels of higher education. He has several degrees.

He always has extreme beliefs, which contradicted with other people's views. That fact often slowed down his career. Thus in 2007, he began working as an assistant editor in the prestigious magazine, but after two years, Richard was fired due to his views.

He always looked for the means of communication with the people and remained working in MediaMedia or publishing. In 2010-2011 Richard edited the website. He also worked as an executive director of the white nationalist publisher. He found the journal and hosted a weekly podcast.

He was also the president of the white nationalist think tank. As a neo-nazi, he utters controversial and extreme ideas in the USA as well as in Europe, but the public and officials don't support him and sometimes take drastic measures.

Thus in 2014, he tried to organize the conference in Budapest. As a result, he was deported. However, he had met like-minded people too. In 2017 he found the new web site expressing antisemitism and white racism. The Swedish publisher Daniel Friberg became the European editor of the website.

He is an active user of social networks. In 2017 Twitter removed the blue mark from his account, which confirmed that the account was authentic. Richard expressed his anxiety stating that Twitter was going to ban people with contradictory views.

Even though the activist has never named nazi himself, his views are close to the German Nazi ideology. Many people didn't like his public speeches as he used Nazi propaganda.

In 2016 the people signed the petition preventing him from speaking in the university in Texas. In 2017 he was denied speaking opportunity in Virginia. During his interview on television, he expressed his ideas. He said that he wanted all white people would have their homeland.

In 2017 he asked speaking opportunity in Florida but was rejected again. Then his lawyer threatened to sue the university, as its action wasn't legal. As a result, the university allowed Richard to speak. His appearance triggered a state of emergency.

In 2018 his pages were shut down on Facebook. This year he considered to enter the congressional district race but hadn't done it.

In 2010 he married Nina Kouprianova. The couple has got two children. After six years of marriage, he separated from his wife.

His wife translated several books of the Russian analyst known for his fascist beliefs. Richard's publishing house released these books.

In 2018 his wife accused him of homicide. She stated that her husband abused her emotionally, financially, and physically during her pregnancy and later, in front of their kids. The caregiver confirmed this accusation.

Even though his net worth is not known, as well as his earnings, the fact that Richard was born in the wealthy family hints that the publisher hasn't to live from hand to mouth.

Richard's position is somewhat controversial. He denies equality as one of the values. He said,

"Greatness is far more important than equality. Equality is for losers".

He openly talks about segregation. He supports the ideas of white pride. The activist expressed the desire to make the homeland for white people and to transform the USA into the white race empire, which would resemble the Roman Empire.

The activist underwent a period of harsh criticism in 2019, primarily after he had expressed his vision of how white people should rule black people, hinting on race war.

Many people criticized him for a lack of clarity and inconsistency. Nevertheless, he considered that ethnostate should be created in the USA as well as in Europe. He supported Trump during the 2016 presidential elections and often compared his election with coming to power Hitler.

In 2016 he stated that women had to return to the traditional roles – child-bearers and homemakers. He doesn't support same-sex marriages describing it as unnatural. Richard supports legal abortion as it should reduce the number of black and Hispanic people. He is an atheist but believes that religion could be an effective means to unite white people. The activist named Russia white power in the world.

He prefers to name himself as an "identitarian." The MediaMedia called him a white supremacist and white nationalist.