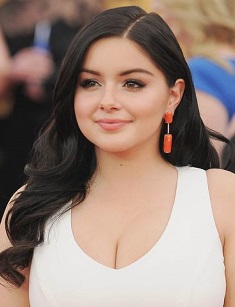 She is a young but much-experienced actress. Her path to success began when the four-year-old girl starred on the commercial. Soon she started to voice and star in the children's programs and later gained several roles in commercially successful TV series as well as feature movies.

She was born on the 28th of January in California. Ariel has got two siblings who became actors too. The actress took her extraordinary beauty from her parents – her mother is of Greek descent, and her father is of German descent. In 2014 it became known that her mother was physically and mentally abusive. Her sister filed to become her guardian. The girl decided to become an actress in her early ages.

Her professional career has started at an early age. Since those times, the actress appeared on numerous pictures and continuously worked as a voice actress, participating in the most prominent video games and animated movies.

She appeared both on the small and big screen. Her first industry job was starring in commercials in 2002. She appeared on numerous children's television shows and also voiced characters in animated pictures. She also appeared on the feature movies, Speed Racer among them.

The actress was lucky to appear on the outstanding TV series "Modern Family," which made her widely known and let her have a permanent job. In 2019 many people found her weight loss. The actress explained that medical treatment caused her unexpected weight loss as well as poor mental health. She showed her super-fit figure in the Halloween, when she posted picture of her Halloween costumes on social networks.

In 2015 the actress decided to undergo breast reduction surgery. The actress told us that she had always been interested in law. In 2016 she was accepted to the top university. Interestingly, the fragile girl has a purple belt in Taekwondo. Among her interests are music, tennis, Twilight TV series. As the actress began working since her childhood, she had gathered a good fortune. Her net worth is $12 million.

The actress dated Levi Meaden, her boyfriend was an actor too. But their relationship came to end in 2019 when they confirmed their split. The couple has been dating for three years.