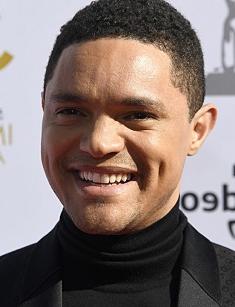 Trevor Noah is a South African comedian, actor, producer, and political commentator. Trevor is the current host of The Daily Show. He is also the author of the book Born a Crime, which was published in 2016. Noah became famous due to his talents in acting and also due to his active role in political discussions.

The famous actor was born in Johannesburg, South Africa. His father is of Swiss-German ancestry, and his mother is of Xhosa ancestry. The interracial relationship was illegal at that time in South Africa; that is why Trevor's mother was jailed for some time. He spent his early youth at the private Maryvale College, a Catholic school in Johannesburg.

The childhood of the boy was not as happy as it could be. Trevor and his mother were physically abused by Trevor's father. Several years later, his father was convicted of attempted murder, and sentenced to three years in jail. Trevor understood that many families in South Africa suffered from domestic violence and hoped the situation would change.

After graduating from university, Trevor began doing comedy around the country. He had a great talent for making people laugh and speaking on different topics. That's how his career started.

In 2002, when Trevor was eighteen years old, he got his first acting role. It was a small part in an episode of the South African soap opera Isidingo. His acting was appreciated by the audience, and Noah was offered to host his own radio show on the youth radio station.

After hosting the sixteenth annual South African Music Awards and several other shows, the comedian became very famous and started to perform all over South Africa. He has given many stand-up comedy performances in his country. But in 2011, he decided to move to the United States and to continue his career there. In January, 2012, he became the first South African stand-up comedian who starred in The Tonight Show.

Up to now, the actor hosts one of the most popular shows on TV since December 2014: The Daily Show. He received a lot of praise from critics. Many people loved him for his provocative speeches. Noah's debut was largely successful. One of the most viewed videos on his Youtube channel, where he has over 5 million followers, is the edition with the democratic presidential candidate Sen. Bernie Sanders. It is known, that Noah's contract as host of The Daily Show is extended for five years, through 2022.

In 2017, the actor appeared in two popular TV series: in Nashville and American Vandal. He also acted in a 2018 American superhero movie based on the Marvel Comics Black Panther.

Trevor Noah is also a talented writer. He is the author of the book, Born a Crime, that was published in November, 2016. The book is a collection of personal stories about growing up in South Africa. It went on to become a bestseller, and a movie adaption is currently in the works.

In the spring, 2019, as the comedian, he performed with his brand new tour, Loud & Clear, covering a range of topics from politics to race and his childhood in South Africa. The show took place in Columbus, Ohio, at the Palace Theater. The comedian is giving his next Load & Clear tour at the Chevalier Theatre (USA), in November 17, 2019. All the tickets are already sold out. Noah will visit several countries with the show, including England, Netherland, Sweden, Germany, and others.

The actor is grateful to many people who inspired him to start the career of the comedian. Noah noted that there are several celebrities who influenced him and laid the foundation of his career. He mentioned Richard Pryor, Bill Cosby, Eddie Murphy, Chris Rock and Dave Chappelle. Trevor also felt thankful to Jon Stewart who was an influence and a mentor for him.

Noah has been in relationships with South African physiotherapist Dani Gabriel, but she didn't become his wife. She supported Noah’s success and tried to be with him on tours. However, reportedly, because of the busy schedule of the actor, both of them decided to live separately and then broke up.

In 2015, Trevor started dating Jordyn Taylor. Immediately the social media were flooded with their love pictures. It seemed the two were happy to be together. Unfortunately, in summer 2018, Trevor decided to break up with his girlfriend.

During an interview, an American actress and comedian, Tiffany Haddish, made some rumors about Noah. She was asked to list her celebrity crush and how she would react if she met them. She said that all her crushes turned her down, including Michael B. Jordan and Trevor Noah. The actor declined this statement and decided not to comment on this gossips. At present, the comedian is single.

An interesting fact is that Noah is a polyglot; he speaks eight languages.

The actor does a lot of charity work. In April 2018, he organized the Trevor Noah Foundation that provides orphans and with the education and necessary products.

The net worth of the celebrity is estimated at around $13 million.