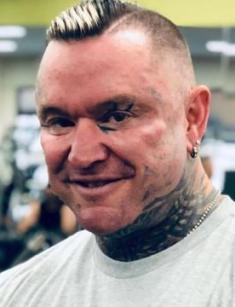 The Australian bodybuilder, Lee Andrew Priest McCutcheon, known as "The Blond Myth," is considered to be the representative of the golden era of bodybuilding. The man became famous in the world of sports, although he did not have an impressive body in his youth. And although the resident of the Green Continent has not achieved excellent results at the Mr. Olympia competition, his determination, perseverance, and charm made the man world-famous.

Lee Priest was born on July 6, 1972, in a working-class and low-income family in Newcastle, Australia. Like many boys, young Lee had an inclination for various sports, preferring rugby, football, and karate.

A little later, he showed interest in hard training under the influence of his grandfather, who was the champion in freestyle wrestling in the army. The mother of the future bodybuilder was engaged in amateur weightlifting. Looking at her, the 13-year-old teenager also enrolled in the gym. There, he was impressed with the muscles of male athletes and photographs of Tom Platz, Eddie Robinson, and young Arnie.

Having set the goal of becoming similar to idols as soon as possible, Lee devoted a lot of time to training. After one year of training, he took part in the teen bodybuilding competition in Sydney. Then he did a couple posing together with his mother several times, and in 1988 won the IFBB Mr. Australia.

This result inspired the young bodybuilder to develop a diet and training program, the key points of which were squatting with a barbell of 340 kg (749 lb) and a 240 kg (528 lb) bench press.

In the early 1990s, Priest decided to start a professional career, but because of his young age, he was not allowed to get his pro card. However, it did not stop the athlete, and he came to the Niagara Falls Championships. There, famous bodybuilder Jim Menon supported the young man who was allowed to enter the contest. However, Lee was confused and finished ninth because he was not prepared mentally for such competitions.

Despite this, Lee’s life changed dramatically, and he managed to outperform the king of bodybuilding, Sonny Schmidt, at the Ironman Pro, and then made the top ten at the Arnold Classic, San Jose Pro Invitational, Grand Prix Czech Republic and IFBB San Jose Pro.

After a while, when the bodybuilder had the perfect figure and gained 213.84 lbs. (97 kg) with a height of 5.34 ft. (163 cm), Priest had to withdraw from several prestigious competitions due to doping problems discovered by the IFBB. He could return to the podium in 1996.

So, during a long professional career, the Australian proved himself to be an outstanding athlete, but in the end, he won only two titles, hitting a lot of podiums.

He did not manage to get a place at the most prestigious Mr. Olympia competition, but Lee won the IFBB San Francisco Pro competition in 2002. Priest also triumphed in 2006 and 2013 at the Australian Grand Prix and NABBA Mr. Universe tournaments, where the athlete surpassed the famous bodybuilders, Ronny Rockel and Chris Cormier.

In July 2000, Priest married Canadian female bodybuilder Catherine LeFrançois, who also participated in professional competitions at that time. After meeting, the couple did not think about changing their personal lives, and the topic of their conversation was sports.

One day, Lee thought that he felt a romantic attraction toward the beautiful and strong woman and decided to write her a love message. Then, when Cathy went to the USA to participate in a photoshoot, the bodybuilder said that he would fly with her.

Until 2005, the couple lived in the USA and trained together in the gym, improving the press, biceps, and triceps. Then they lost interest in each other and filed for a divorce. So, LeFrançois continued to go in for sports, and Priest married a girl named Rachel Goodban.

Besides, he became the hero of the documentary movie Lee Priest: The Blond Myth and then began his acting career. From 2015 to 2019, the athlete starred in the movies Dumb Criminals: The Movie, The Skydiver & the Scarecrow, Domino Boys, and Round Trip.

Lee Priest has an estimated net worth of $1.5 million.