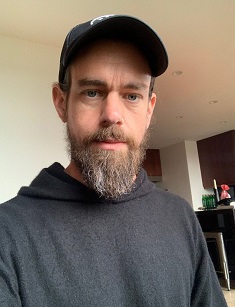 Jack Patrick Dorsey is a computer programmer from the U. S. In 2006, he co-founded Twitter, and four years later, the Square.

Jack Patrick Dorsey was born in Missouri in 1976 to Tim and Marcia Dorsey. He studied at the Catholic Bishop DuBourg High School, and during that time, he worked as a fashion model sometimes. Speaking about his further education, in 1995–1997, Dorsey attended the University of Missouri–Rolla, then he transferred to New York University, where he dropped out in 1999 although there was just one semester before graduation left. While studying at NYU, Jack started developing the idea of the platform that later would be called Twitter.

In 2000, Dorsey launched his own company in Oakland to dispatch couriers, taxis, and other services from the Internet. Also, that year, he had some thoughts about a short message service on the Web. Jack wondered whether it is possible to share a software's user status with friends. He and Biz Stone built a platform that was before Twitter in approximately two weeks. This concept gained wide recognition from various users at Odeo, a web-site, and Evan Williams, a famous programmer from Google, made some investments in guys’ creature.

Dorsey, together with Stone and Noah Glass, founded Obvious Corporation that later launched Twitter, Inc. Jack was a CEO but lost his place because of leaving work early to do yoga and fashion design. The service Twitter started gaining wide recognition. As of 2008, it was not designed to earn.

In October that year, Williams took the position of CEO, and Dorsey – of chairman of the board. In 2011, Dick Costolo became a new CEO, and Jack came back to Twitter as Executive Chairman. Four years later, Costolo resigned as CEO, and Dorsey became a permanent CEO of Twitter.

In November 2016, Jack was suspended from his own account on Twitter, and after its return, he posted that it was an internal mistake. Two years later, Dorsey gave testimony together with Sheryl Sandberg, the Facebook chief operating officer, before the Senate Intelligence Committee because of meddling in the presidential election. He was answering questions from members of Congress on such issues as hate speech, election manipulation, etc.

Later, Dorsey had a meeting with the U.S. President Donald Trump at the White House because Trump had concerns about Twitter removing his followers, including conservatives. After that, the founder of Twitter said that their discussion was also about making Twitter more civil. In summer 2019, Dorsey’s Twitter page was hacked for an hour, and the hacker posted lots of racist tweets.

In 2010 Jack, together with Jim McKelvey, launched Square, a business platform for payments. This small, square-shaped device is appended to Apple and Android devices by the headphone jack. It lets people swipe their cards, transfer some amount of money to the recipient, and sign their names to confirm the payments. Square’s office is located in San Francisco. Dorsey currently works as the CEO of Square.

Dorsey’s personal life remains a little mysterious. Does he have a girlfriend or even a wife?

However, last year, it was reported that Jack was dating a model Raven Lyn Corneil. They were seen together at the Harper's Bazaar Icons party that was a part of New York Fashion Week. Also, in 2018, Dorsey bought a house for his girlfriend in the Hollywood Hills, but in August 2019, he put the house up for sale. We guess it means that the couple separated. Among his other exes, there was a model Lily Cole who was in the relationship with Jack in 2012–2013. Now she is happy with her partner Kwame Ferreira and daughter, Wylde Cole Ferreira.

In 2016, there was an amusing story. The singer, Azealia Banks, announced that Dorsey had sent his beard hair to her so she could make an amulet to protect the programmer from ISIS. However, he denied this information.

In 2019, in the episode of Black Mirror called Smithereens, there was Billy Bauer, a personage who is supposedly based on Facebook's Mark Zuckerberg and Twitter's Jack Dorsey. Also that year, in one of his interviews, Jack shared his daily routine rules, including meditations twice a day and ice-cold bath every day.

In 2017, Jack, together with Omid Kordestani, the Executive Chairman of Twitter, donated $530,000 to the American Civil Liberties Union. The total donation raised by Twitter workers turned out to be $1.59 million.

In October this year, Dorsey made a donation of $350,000 to #TeamTrees, a nonprofit movement that was started by YouTuber MrBeast, who decided to plant 20 million trees by the end of 2019.

In 2012, Dorsey received the Innovator of the Year Award for technology by The Wall Street Journal. In 2016 and 2017, he was called one of the worst CEOs in the world by Fox Business and 24/7 Wall Street, respectively.