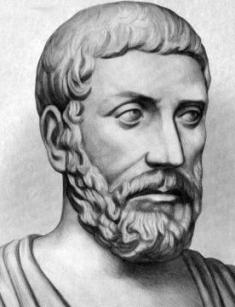 Pythagoras of Samos is a legendary figure in the ancient Greek culture: he was a great mathematician, philosopher, mystic, and the founder of the Pythagoreanism doctrine. Besides, he is known as a political activist, who left many works to his successors.

It is not an easy task to identify the date of Pythagoras’s birth; historians believe it is about 580 BC. Samos, Greece, was his home island.

The name of the philosopher’s mother was Pythaïs; the father’s name was Mnesarchus. The legend says the young spouses met an oracle one day; he foretold the birth of the son, who would stand out for his wisdom, looks, and great deeds. Soon, the young woman gave birth to Pythagoras and received the name “Pythiada” according to an ancient tradition. The boy was named after an Apollo’s priestess Pythia.

The father of the future mathematician tried to do everything to make the prophecy come true: he created an altar to Apollo and surrounded the baby with love and care.

Some sources give the information about the philosopher’s elder brothers, Eunomus and Tyrrhenus.

Mnesarchus worked as a gem-engraver; the family was pretty wealthy. Little Pythagoras showed interest in various sciences, and his abilities were impressive. Hermodamas of Samos was probably his first teacher, who gave him the basic knowledge of music, painting, reading, rhetoric, and grammar. Hermodamas developed his mentee’s memory and had him learn pieces of Odyssey and Iliad by heart.

As long as he had enough knowledge, the 18-year-old young man went to Egypt to continue his education and study from wise priests. However, it was not an easy task: the country was closed for the Greeks at that period. Under those circumstances, Pythagoras stayed on the Lesbos island, where Pherecydes of Syros taught him physics, dialectics, theogony, astrology, and medicine.

Several years later, Pythagoras headed for Miletus, where famous Thales lived; he became the founder of the first philosophical school in Greece.

The school helped the young man gain much knowledge, but he followed Thales’s recommendation and went on to Egypt. He finally had the opportunity to meet priests and visit Egyptian temples closed for foreigners; secrets and traditions opened for him. Soon, Pythagoras also became a priest; the studies in the cultural center made him one of the most educated people at that period.

The mathematician’s life changed when the Greco-Persian Wars escalated; he was captured and lived in Babylon for several years.

There are old legends about a talented philosopher and heavenly handsome man; old painters’ pictures and sculptures support them. One day, Pythagoras met with Persian magicians and got acquainted with mysterious phenomena; he learned the wisdom of astronomy, arithmetic, and Eastern medicine.

The Chaldeans believed these sciences originated in a mysterious way; this approach reflected itself in Pythagoras’s further studies of mathematics and philosophy.

12 years after the involuntary staying in Babylon, the Persian king, who had heard about the Greek scientist’s teachings, set him free. The man returned to his homeland and began to attach his own people to the new knowledge. Soon, the philosopher earned much popularity; even women, who were forbidden to attend public meetings, went to listen to his speeches. This is how Pythagoras met his future wife.

The literate, intelligent man had to teach people of low morals; he became the picture of purity, similar to gods. Pythagoras used Egyptian priests’ methods, purified his audience’s souls, and filled their minds with knowledge. He began to deliver speeches in the street or temples but then switched to home studies. It was a peculiar system and took from three to five years of education. Students were forbidden to talk during classes and ask questions to practice patience and humbleness.

The sophisticated orator taught people various sciences: medicine, politics, music, mathematics, and so on. Many prominent historians, politicians, statemen, astronomers, and researchers graduated from his school.

Pythagoras’s contribution to geometry was significant. Nowadays, his name is often associated with the famous theorem that school students study. The formula is as follows: a2 + b2 = c2, where a and b stand for two sides, and c stands for the hypotenuse in a regular triangle.

Later, other mathematicians created the converse theorem. Overall, there are 367 theorem provings; it is fundamental for the whole geometry.

Another famous invention is “Pythagoras’s table”, or the multiplication table; the mathematician’s students used it at that time.

Pythagoras’s discovery of the mathematical correlation between the pitch of lyre’s vibrating strings and their length was peculiar; the same principle is relevant for other musical instruments as well.

The philosopher paid much attention to numbers and explored their nature, the meanings of things, and phenomena. He attached number properties to existential categories: humanity, death, diseases, suffering, etc. The Pythagoreans divided numbers to odd and even. According to their worldview, square numbers contained justice and equality; nine was about stability, and eight pertained to death. The school saw even numbers as attributed to the female, and odd numbers were assigned to the male. Five was the symbol of marriage for Pythagoras’s successors: three plus two equaled five.

Thanks to the numerologist’s knowledge, modern people have the chance to calculate how compatible they are with their partners and see what the future might bring. One can use the square system and create a graphic to show a person’s fate.

Pythagoras’s followers believed that numbers could influence the world, and the most important thing was to comprehend their chain meanings. They also pointed out positive and negative numbers, like 13 or 17. Today, numerology is not a science officially; it is a system of beliefs and nothing more.

Pythagoras’s teachings consist of two parts: the scientific approach and, on the other hand, religiousness and mysticism. The great master rarely wrote anything down; he preferred to teach his pupils orally. The knowledge survived up to the present day thanks to his successors.

The philosopher was a religious innovator, who created a secret society and held forth acousmatic ideas; he prohibited his disciples from eating the food of animal origin, particularly, a heart, the symbol of life. Touching beans was also banned – according to the legend, they came from Dionysus- Zagreus’s blood. Alcohol consuming, swearing, and rude behavior were criticized.

Pythagoras believed that a person could save and free their soul through physical and moral cleansing. His teachings may be compared to the ancient Vedic knowledge based on the quantitative transmigration of souls; they will get to animal or human bodies until the right to return to God is earned.

Pythagoras did not impose his philosophy on ordinary people, who just needed to learn the basics of sciences. His specific teachings were intended for “enlightened”, chosen people.

As long as Pythagoras returned to Greece from Babylon, he met a beautiful woman, Theano, who attended his lectures secretly. The philosopher was not young at that time: something about 56-60 years old. Soon, the lovers married. They had two children, a boy and a girl, together; their names are unknown.

Some sources claim that Theano was the daughter of Brontinus of Croton, the scientist’s student and friend.

Pythagoras’s school was located in Crotone, the Greek colony in South Italy. A democratic revolution took place there, and the philosopher had to leave the region; he headed to Metaponto, but the rebellion reached this town soon.

The mathematician had many enemies who did not share his life principles. There are three main theories about Pythagoras’s death. It could be a man whom he rejected to teach secret occult methods. The offended was furious and burned the academy’s building; Pythagoras died, saving his students.

Another legend is that the scientist’s disciples made a bridge with their bodies to rescue their teacher; he died of a cardiac rupture, underestimating his effort to develop the civilization.

There is also the opinion about Pythagoras’s accidental death: he died during a fight in Metaponto at the age of 80-90.