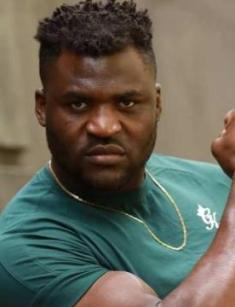 Francis Ngannou is a mixed martial artist from Cameroon. The athlete represents France at competitions, competing in the heavyweight division of the Ultimate Fighting Championship. Francis is one of those people who came from nothing. Having decided to become a professional athlete in his youth, the fighter pursued the goal against all the odds. As of 2019, the athlete is one of the most promising representatives of this sport. His nickname is The Predator.

Francis was born on September 5, 1986, in the village of Batié, Cameroon. The income of an ordinary resident in this country does not exceed $ 1,500 per year. Until 2000, not everyone could study at a primary school, since they had to pay for education. The vast majority of Cameroon's citizens live in poverty without prospects.

Francis was no different from other children. Ngannou spent his childhood in poverty. From a young age, the guy worked, combining part-time jobs. At the age of 12, he began to work in a sand quarry. It took a long time to break rocks and pull a cart with small stones along a steep slope, and the result did not depend on whether Francis lent soul to a task or not. The guy was next door to starving. They did increase his salary, and the work was monotonous. At the age of 22, the young man finally understood the degree of hopelessness and the need for change.

In an interview, Francis said that the movie 300 about the fate of the Spartans inspired him to change his life. Ngannou put on boxing gloves and first tried his hand at fighting. A turning point in Francis Ngannou’s life was the move to Paris.

The novice athlete did not have friends and money, so he was homeless for the first three months. He trained at the gym, where he managed to get for free during the day, and the athlete was on the street at night. The owner of a gym trusted him. First, the man allowed to leave the guy’s belongings, and then spend the night in his gym.

The young man managed to find a job as a security guard at a nightclub. On weekends, Ngannou was busy but devoted weekdays to training. Francis liked Mike Tyson's boxing techniques. The novice athlete considered the legendary fighter to be his idol, so he watched Mike’s performances over and over again. Francis got a load of some strategies.

Francis Ngannou made his professional debut in Paris and then participated in fights in Geneva and Bahrain. The defeat in one of his debut fights made him set a new goal. At first, he fought to prove himself, and then he became interested in the sports, and in 2015, representatives of the UFC signed a contract with him. Having appeared in 6 fights, he won 5 bouts, which was a record. Ngannou defeated rivals, remaining the undisputed leader in the battle.

By May 2017, most of Francis' opponents could not stand against him for more than two rounds. Experts mentioned that the athlete had an amazing power of a blow and flexibility with a height of 6.33 ft. (193 cm) and a weight of 249.12 ft. (113 kg). Francis knocked out opponents quickly. Ngannou managed to defeat Alistair Overeem, who was considered the most powerful heavyweight fighter over the recent years. This triumph allowed him to face Stipe Miocic in the fight for the UFC Championship title.

It is interesting that athletes do not earn a lot of money for the performances in a category with high health risk. Ngannou got $ 20,000 for his debut fight. He received half of this income for entering the ring and the other half for the victory. Such an amount of money was real wealth for the Cameroonian athlete. Further tournaments held in the United States cost more, but the fighter’s earnings barely exceeded $ 40,000 per fight, and he got half of them for the victory.

At the UFC on Fox 17 tournament, held in 2015, Ngannou faced Luis Henrique, knocking out the opponent in the second round. Then he did his best in the fight with Curtis Blaydes. The bout took place in 2016 at the UFC Fight Night 86 competition. Once again, the second round was decisive for the athletes.

The same thing happened in the battle with Bojan Mihajlović. It was followed by the fight with Anthony Hamilton, in which Francis won via the submission in the first round, receiving the Performance of the Night bonus. In 2017, Francis Ngannou defeated Andrei Arlovski, showing a spectacular knockout. He got the Performance of the Night bonus again.

Francis gets a good salary now. He provides for his family, often comes to his homeland, and provides financial support to local children. Ngannou is proud of his ancestry and success; therefore, he proudly poses with the flag of Cameroon, along with the French flag. Francis has no wife and children. His personal life is a closed book since the athlete does not make it public.

In the winter of 2019, The Predator faced Cain Velasquez in the ring and knocked out his opponent. And in July 2019, the fighter opposed Junior dos Santos at the UFC on ESPN 3 competition. The opponent was also knocked out. So, Ngannou has to wait for the fight between Stipe Miocic and Daniel Cormier to find out about his rival for the championship title.

The athlete has a verified profile on Instagram, where photos and videos are regularly posted. The content is mainly related to training and fighting, as well as photos with his loved ones. The athlete also advertises sports nutrition. The fighter spends the overwhelming amount of time in the gym to keep fit but does not forget about traveling and entertainment.