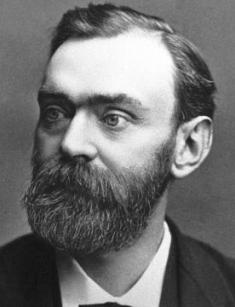 Alfred Bernhard Nobel is a Sweden chemist and engineer known as the creator of dynamite, gelignite, and cordite.

The would-be scientist was born on October 21, 1833. The boy’s father was Immanuel Nobel, an inventor and industrialist. He became famous thanks to his exploding mines used by the Russians during the Crimean War; this invention brought him an emperor’s award.

The mother, Karolina Andriette, was a housekeeper and brought up four sons: Alfred, Robert, Ludvig, and Emil. The family lived in Sweden and moved to Finland; the migration to St. Petersburg, Russia, followed. Immanuel’s activities were not limited to the military sphere – he also contributed to the house heating system with water vapor and invented the rotary lathe for wagon wheels.

Nobel’s children were home-schooled; their private tutors taught them sciences, literature, and European languages, so the boys spoke Sweden, Russian, French, English, and German. At the age of 17, young Alfred traveled across Europe and the United States; he had an opportunity to co-work with Théophile-Jules Pelouze. In 1936, he identified glycerin chemical composition); in 1840-1843, Pelouze and Ascanio Sobrero were working on nitroglycerine production.

Under the guidance of the Russian scientist Nikolay Nikolaevich Zinin, Alfred took an interest in glyceryl trinitrate. It brought the young man to the invention that made him famous: dynamite was created on May 7, 1867.

Nobel left France to the USA to collaborate with the American researcher of the Swedish origin John Ericsson, who created the civil-war participant USS Monitor and studied solar energy properties. The young student conducted many chemical and physical experiments under his mentor’s guidance.

As long as Novel returned to Stockholm, he did not stop working; he was looking for an active substance that could reduce the explosive hazard level of glyceryl trinitrate. One of the experiments ended up with a tragedy: there was an explosion at one of the Nobel’s plants on September 3, 1864; several people, including Alfred’s brother Emil, died. The young man had just turned 20. The father could not stand it and had a heart attack; he passed away soon.

The next month after the incident, Alfred received a patent on nitroglycerine; he continued with the licenses on dynamite, gelatine dynamite detonator, and other explosives. The scientist was equally successful in practical facilities: fridge, steam generator, gas burner, barometer, and hydrometer. It was Nobel who developed the chemical composition of artificial silk and cellulose nitrate. Overall, he could boast 355 inventions in biology, chemistry, optics, medicine, and metallurgy.

To popularize each invention, the scientist organized presentations and showed how a new instrument or substance worked. Such events were immensely popular among the amateurish public, as well as Nobel’s colleagues and friends.

More than that, the man was fond of writing; poetry and prose were his day-off hobby. The play Nemesis became one of the most controversial texts; it was forbidden for many years by the church until The Royal Dramatic Theatre staged it in Stockholm in 2003.

Alfred was a person of multiple interests: science, philosophy, history, literature. He made friends with popular painters, writers, scientists, and state figures; dinners and royal parties were frequent in his life. The inventor was an honorary member of many Academies in Europe: Sweden, England, Paris, Uppsala University; the list of his awards includes French, Swedish, Brazil, and Venezuelan orders.

Experiments required many expenditures, and the family had some financial problems until the brothers purchased a stock of shares of Baku oil field; they found themselves rich soon.

In 1889, the Universal Peace Congress was held in Paris; Nobel delivered lectures there. Some participants were sarcastic about that: the person who invented the weapon could not be present there. The media called Alfred the king of murders and bloody millionaire; the scientist was upset about that, and such an attitude almost broke him.

Alfred Nobel never married. The future scientist fell in love with a drug-store girl for the first time; she died of TB soon after they met. However, the engineer did not mourn for a long time – he was infatuated by the drama actress Sarah Bernhardt. Nobel asked for his mother’s blessing, but sagacious Andriette did not approve of his choice. The young man broke up with the artist and stopped looking for a partner; he threw himself in work.

In 1874, Alfred was looking for a secretary and met Countess Bertha Kinsky; they became lovers for several years. However, the woman left the engineer and went to the capital of Austria, where another fiancé was waiting for her.

In his last years, an illiterate peasant was following Nobel; she wanted to become his wife by all means, but the chemist kept rejecting her.

In 1893, Alfred Nobel created his first document, according to which a large part of his money would go to the Royal Swedish Academy of Sciences after his death. A fund would be opened to give annual awards for scientific discoveries. The Stockholm University, the city hospital, and the Karolinska Institute would receive 5% of his heritage each.

Two years later, some changes were introduced: the payments to relatives and organizations were cancelled while the fund with stocks and obligations was to be made. The profit would be subdivided into five parts; today, prizes are given for the discoveries in physics, chemistry, physiology and medicine, literature achievements, and peace activities.

The engineer died of a stroke on December 10, 1896, in his own villa in Sanremo. His body was brought to his homeland and buried in Norra begravningsplatsen, Sweden.

Three years passed before Alfred Nobel’s last will was revealed and executed. In 1901, when the country’s parliament finished all the formalities, the first outstanding scientists received their awards.