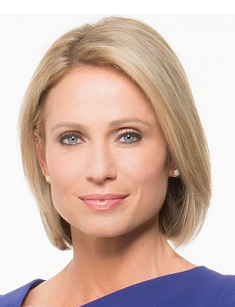 The survivor of cancer, a talented correspondent, and just a beautiful woman, Amy Robach has made a notorious career. She is most famous for being a TV presenter for ABC News. She was a national correspondent for NBC News, and a co-host of several news programs. The woman faced breast cancer, but she bravely defeats the disease.

The famous correspondent was born in St. Joseph, Michigan. The girl grew up in East Lansing, Michigan before moving to St. Louis, Missouri. Amy is known to be a cousin of former Nashville Star contestant Matt Lindahl. Her aunt and uncle were teachers of art at the school where she studied.

She attended college in Georgia after her family, including her brother, moved there. After that, she got an education at the University of Georgia. She was an excellent student and was proud to finish University with high grades. Amy got a degree in broadcast journalism and dreamt about becoming a famous journalist. During her school years, Robach spent a lot of time training and doing sports; she was a competitive gymnast for seven years.

Amy started her career in 2003 when she came to work as an anchor to MSNBC. She made a progress and was named co-anchor of Weekend Today in 2007. In 2012, after successfully hosting the program she decided to move to ABC News.

Firstly, she worked as a correspondent on ABC's Good Morning America program. She became the show's news anchor in March, 2014. In 2018, she took a new position and was the news anchor of a TV news magazine called 20/20.

At the end of 2019, the opponents of democrats, Project Veritas issued a "hot mic" talk in which Amy discusses ABC closing her story on billionaire convicted sex offender and accused sex trafficker Jeffrey Epstein in 2015. On the video, which rapidly spread on the Internet, Amy gave her comments on the story. She told the unseen colleague that she felt very frustrated that three years ago she couldn't reveal all the details of the story with Epstein because the standards of the ABC channel didn't allow her to do it. According to her, they couldn't put the story on the air. Amy was upset that the interview with Virginia Roberts on which she had worked was left unpublished three years ago.

ABC News responded after the video went viral, saying that they have never stopped investigating the story. They added that the team made a huge work, and a two-hour documentary and a podcast will air soon.

In October 2019, Amy also appeared in the talk with Hunter Biden, an American lawyer and lobbyist. In the ABC News' talk, he stated that he made no “ethical lapse” by sitting on the board of a Ukrainian gas company, and rejected President Donald Trump’s notion that he and his father, former Vice President Joe Biden, have engaged in any wrongdoing. This meeting is vehemently discussed on TV and the Internet.

Speaking of the private life of Amy Raboch, she was in a relationship with Tim McIntosh from 1996. The couple broke up in 2008. Amy gave birth to two girls, whose names are Ava and Analise.

After the divorce, one year later, former Melrose Place star Andrew Shue became her husband. According to her words, they met each other at a book party. Robach and Shue were married on her 37th birthday in 2010. Amy and her husband are raising three kids (her stepsons from her second marriage): Nate, Aidan and Wyatt.

Amy is very popular in social media. On her Instagram account, she has over 290,000 followers. Her posts are about sports, her work on TV and everyday life. She likes to share all moments with her fans, who in return, express their respect and support. Her followers call her a positive and very energetic person, who despite all her health problems, leads a very active lifestyle and sets an example for others.

The net worth of Amy Robach is estimated at around $1.5 million, as of 2019. Amy Robach salary is $300,000 per year. She makes extra money from her books, which help to increase her net worth.

In November, 2013, Amy announced during the air on Good Morning America that she had breast cancer. The correspondent had to take a break from broadcasting to undergo treatment. Sometime later, the woman faced another problem: doctors found a second malignant tumor in her other breast. Amy had to take another course of treatment. At present, she is called a cancer survivor.