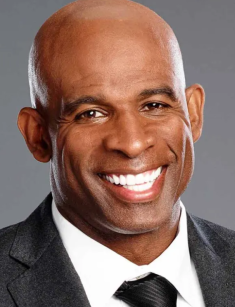 Deion Luwynn Sanders Sr. who was born on August 9, 1967 is an American former professional football and baseball player. Better known as "Neon Deion", "Prime Time" or simply "Prime", he played college football for the Florida State Seminoles and joined the Atlanta Falcons in 1989. During his 12-year-old career in baseball, Deion played for four teams, including New York Yankees and San Francisco Giants. Since 2022, he has worked as the head football coach at the University of Colorado Boulder.

The player's hometown is Fort Myers, Florida, where he spent his childhood and youth. Deion's parents' names are Connie and Mims. They divorced when he was a child. Sanders' role model and father figure was his stepfather, Willie. Despite sharing the same last name, Deion is not related to the Detroit Lions star Barry Sanders.

In 1989, the cornerback started his professional career with the Atlanta Falcons, where he remained for four seasons. In 1994, Sanders joined the San Francisco 49ers for what was one of the most triumphant seasons of his football career. His impressive performance gained him the attention of many legendary teams, including Philadelphia Eagles, Miami Dolphins and Dallas Cowboys. Sanders chose the latter and was the team's cornerback until 1999.

During his career as a cornerback, Deion also was a member of the Washington Redskins and the Baltimore Ravens teams. After retiring as a football and baseball player, he was a TV analyst for the NFL Network. The football hero also coached the Jackson State Tigers for two seasons. In December 2022, it was announced that he was appointed as the head coach of the Colorado Buffaloes.

In 1989, the player wed Carolyn Chambers. The couple parted ways nine years later after having two children. Sanders' second wife's name was Pilar Biggers. A fitness trainer and model, she married Deion shortly after the dissolution of his first marriage. The couple had three kids together. They divorced in 2013. Sanders is currently dating a businesswoman, Tracey Edmonds.

In 2021, the coach made a unique move when he invited an Instagram model, Brittany Renner to have a frank conversation with his team about the dangers of romantic entanglement in the digital age.

In 1998, Sanders made news headlines when he was arrested after a violent altercation with a store clerk. His then coach Bobby Bowden supported the player and allowed him to play as usual in the Sugar Bowl Monday against Auburn.

In 2012, the cornerback was charged with misdemeanor simple assault after a fiery argument with his wife.

As a cornerback, Sanders earned the Jim Thorpe Award (1988) and the PFWA All-Rookie Team honor (1989). In 1994, he became the NFL Defensive Player of the Year. The cornerback was named to the Pro Bowl eight times. As a coach, he is two times SWAC East Division champion. Deion is also the Eddie Robinson award winner.